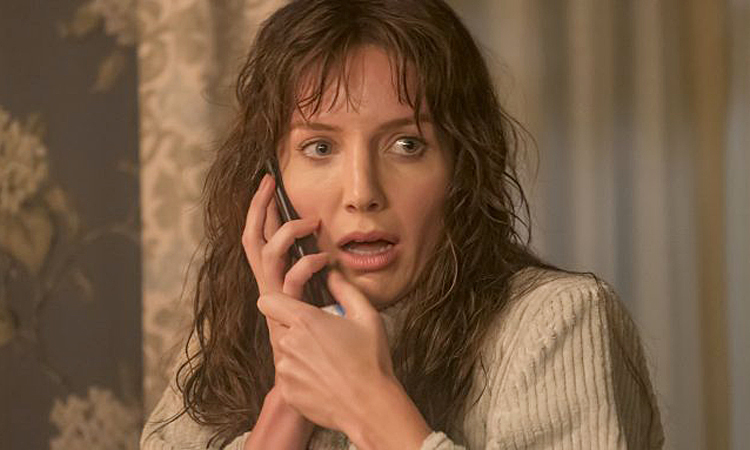 The woman who often finds herself at the scene of a murder when she wakes up in the middle of the night in the thriller “Malignant”.

Madison (Annabelle Wallis) lives with her husband but is often in conflict, longing to have children after many miscarriages. Once, when she woke up in the middle of the night, she found her husband dead in the living room from a broken neck. An unidentified creature appears in the house, causing Madison to panic, run away, and faint. Since then, she regularly sees the space around her shift, bringing her to the scene of murders. Madison first saw the killer in action, waking up not knowing if it was a dream or reality. She is determined to find the answer with the help of her sister Sydney (Maddie Hasson).

The film is directed by James Wan, written by Akela Cooper, based on the story she created with Wan and his wife – Ingrid Bisu. The work has a bit of a detective feel when the police appear, tracking the crime, reminiscent The Silence of the Lambs (1991) or Halloween (1978). The main content is about a serial killer, but what attracts the audience is his connection to Madison. The first half of the film is a bit confusing because many characters are introduced and the cases are intertwined. The second half is more interesting when the pieces are put together, the origin of the killer’s name is revealed.

The work marks James Wan’s return to the horror genre since The Conjuring 2 (2016). Above Total Film, he says, is inspired by the 1980s horror line, which puts the victim in the perspective of the killer. Wan especially loves the sub-genre in the horror genre, wants to make a movie like The Eyes by Laura Mars, but mixed the styles of Brian De Palma, Dario Argento and Mario Bava – three directors who have successfully conquered the horror genre in their own ways.

Technique plays an important role in the film. The CGI effect was used to describe the feeling when Madison was brought to the murder scene. She was sitting alone in the house when everything around her changed. The walls broke apart like they were skinning, the interior melted like candles. Cinematography Michael Burgess exploits a variety of camera angles, placed under the bed, raised overhead or vice versa. The lens when it revolves around Madison, when it follows the character’s back, does not stop shaking.

Fear stems from many factors, from sound, light to context design. Manufacturers put the house in darkness. Many frames use the dominant red tone with the sound creating a feeling of horror and suspense. To lead the story, the director mixed many lines such as gore, body, psychology (psychological) to killing (slasher). When acting, the murderer used a knife to stab the most dangerous places on the victim’s body. Towards the end, the number of violent scenes at R level (restricted to audiences under 17 years old) increased, such as brain surgery, meat cutting, bone breaking… not suitable for the faint of heart.

The minus point is in the script. Many episodes are absurd and lack of connection. The scriptwriter focuses on the murder case, so he doesn’t invest in exploiting the character’s psychology, from the main like Madison to the secondary like Sydney. At the end of the film, the familial, sisterly relationship between Madison and Sydney is used to promote emotions, but to no avail. Author Michael Ordoña of the Los Angeles Times Dialogue in the film lacks emphasis, the characters act irrationally. Critic Charles Bramesco’s The Guardian I think that sometimes when a script is like a B-rated movie, the director and screenwriter take a long time to plan.

Actress Annabelle Wallis has experience in horror movies Annabelle (2014) and Annabelle: Creation (2017) so it’s not difficult to incarnate Madison. The character motif is also familiar in horror movies, only expressing the feeling of fear through facial muscles or eyes, with little action. Playing the role of Sydney’s sister, the actress born in 1995 Maddie Hasson had little land to act, not leaving much of an impression.

Critics have given the film a lower rating than James Wan’s previous horror films, with a score of 6.3/10 on Rotten Tomatos and 50/100 on Metacritic. Author Hanna Flint’s Empire I gave it 3 out of 5 stars, saying it was reminiscent of horror movies of the 1970s and 1980s, but the storylines weren’t put together well. The newspaper’s Frank Scheck writer CHEAP The film borrows many elements from the works of Dario Argento, David Cronenberg and Brian De Palma. Page Indiewire rating the film at C, the film rating does not follow any formula, so it forms a confusing mixture.

Opening in the US on September 10, the film lost capital when it earned $ 14.7 million compared to a budget of $ 40 million. The audience score on IMDb is 6.3/10, CinemaScore’s vote is at C. According to PostTrak’s report, the audience rating positively is 59%, only 38% say they will recommend the movie.