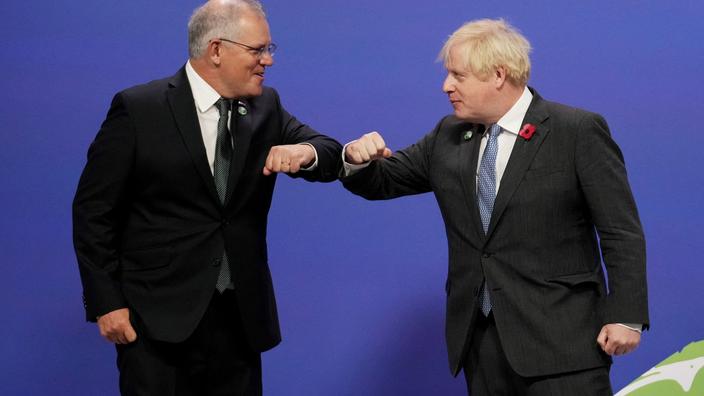 This “historic” agreement sets “new global standards” and will offer “new work and travel opportunities for Britons and Australians”.

The United Kingdom on Thursday signed the post-Brexit free trade agreement with Australia, a compromise that should open the doors to the Asia-Pacific region, but criticized for uncertain benefit and its environmental impact.

Read alsoBrexit: economic players have it both ways in Northern Ireland

The agreement “historical” ratified in a virtual ceremony was the subject of an agreement in principle in June between British Prime Minister Boris Johnson and his Australian counterpart Scott Morrison, and “The negotiators have now finalized all the chapters”, according to a statement from the UK Department for International Trade. It is the first agreement obtained by London since its exit from the European Union, effective since January 1, not to be simply a renewal or an adaptation of those which exist between the EU and other countries.

The text, which will be submitted to parliamentarians for consideration at Westminster, should generate “10.4 billion extra pounds of trade (…) by eliminating tariffs on 100% of [leurs] exports”. Trade between the two countries amounted to £ 13.9 billion in 2020, just over 1% of total UK trade. The agreement establishes “New global standards in digital and services, will create new work and travel opportunities for Brits and Australians”, underlines the British government.

London boasts a text “Tailor-made for the UK economy” especially in areas where the country is “A world leader, like technology and digital”. British professionals in the service sector, including architects, lawyers or researchers, will have access to work visas in Australia: “This is more than Australia has ever offered to any other country in a free trade agreement”, welcomes the Ministry of International Trade. This compromise “Boosts our chances of joining the Trans-Pacific Trade Treaty (CPTPP)”, which brings together eleven countries in America and Asia and weighs “8,400 billion pounds in GDP”. The president of the CBI employers’ organization, Karan Bilimorian welcomed an agreement “Complete and modern”, Who “Opens new frontiers for UK businesses”.

The United Kingdom has already obtained agreements with the EU, by far its largest trading partner, Japan, New Zealand, or even with European countries that are not members of the EU, Norway, Iceland and Liechtenstein. The country is discussing with India and launched negotiations for a free trade agreement with the six Arab Gulf countries in early October and is also seeking to strengthen its trade ties with the United States, without having been able to stall for the time being. of promise from Washington. Boris Johnson had called for leaving the EU by promising the UK would have more economic potential going it alone, touting his concept of “Global Britain”, Where “Planetary Britain”.

The NGO Greenpeace for its part deplored an agreement to the text “Not yet published” and who will have “Not only one of the worst impacts on the climate but with a country which is one of the main world centers of deforestation”, which goes against the British environmental objectives of London, which aims for carbon neutrality in 2050.

During negotiations between the two countries, the British agricultural sector was concerned about competition from Australian products, such as beef and lamb, which are cheaper with more industrial farming with more flexible sanitary standards. To reassure breeders, the text provides for a limit on imports on British soil without customs duties for 15 years, notably through quotas, the British government said in June, which did not provide details on the shutter. agricultural in its press release on Thursday.

London and Canberra had indicated that they wanted to deepen their cooperation also on the security aspect, as evidenced by the partnership concluded between the United States, called AUKUS, which triggered the anger of Paris by de facto canceling a contract for the purchase of French submarines worth 55 billion euros with the Australians.