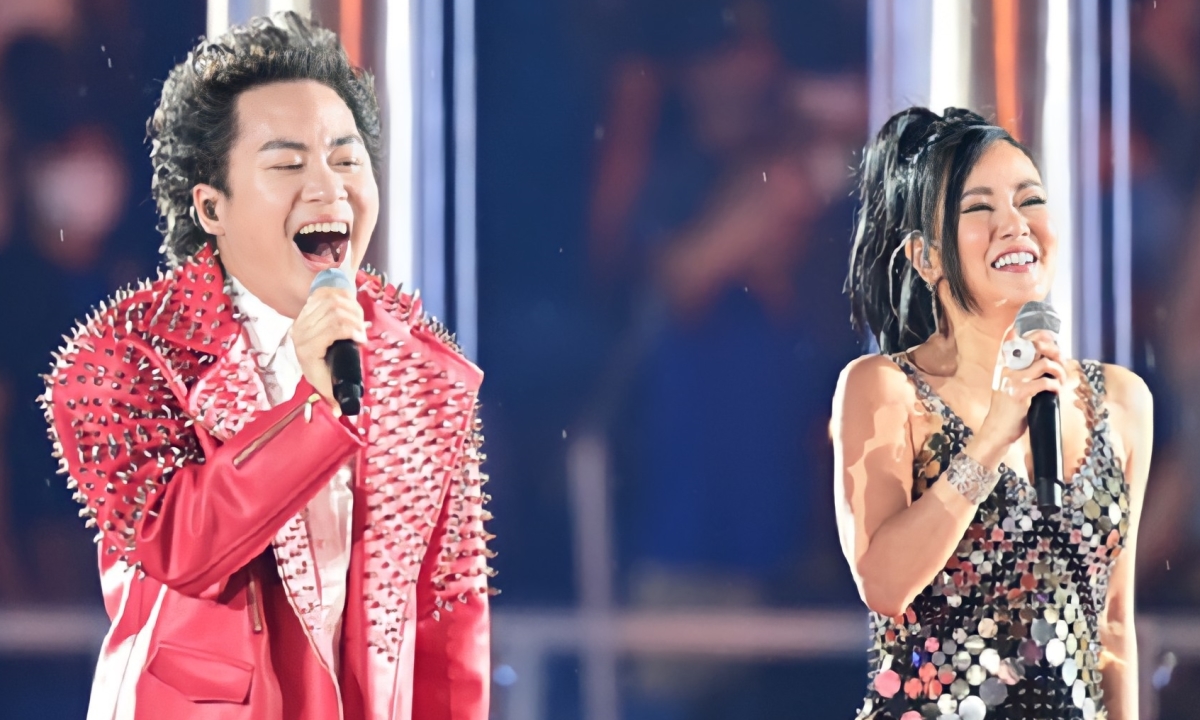 HanoiSingers Tung Duong and Hong Nhung along with 110 dancers and 250 athletes performed the song “Let’s shine” at the opening ceremony of SEA Game 31, on the evening of May 12.

The song Let’s shine (Let’s shine) Closing the opening ceremony took place at My Dinh Stadium. The performance had the participation of Tung Duong, Hong Nhung and Oplus group. 110 artists wearing ao dai dance alongside 250 athletes, the saola mascot, the symbol of 54 Vietnamese ethnic groups, and representatives of 11 Southeast Asian countries appeared on the stage. Finally, fireworks shine in the sky, signaling the start of the 31st SEA Games.

The song is mixed in a vibrant style, creating a highlight for the show. Composer Huy Tuan composed a song during the quarantine period because of the epidemic, upholding the goodwill of the host country, and conveying the message of a strong and united Southeast Asia.

Initially, the organizers invited My Linh to perform, but the singer was busy with family matters. Hong Nhung was chosen instead, becoming the only female singer to contribute in the two SEA Games Vietnam hosted. 19 years ago, she was one of 22 performers of the song For a world tomorrow (musician Nguyen Quang Vinh) with My Linh, Trong Tan… As for Tung Duong, Oplus has a powerful voice, suitable for the spirit of the song.

The program features cultural dances, with the participation of more than 600 artists and 250 athletes. The opening night consisted of three chapters: Friendly Vietnam – depicting the image of the country with a rich and friendly culture, Strong Southeast Asia – show the strength of the countries in ASEAN, Southeast Asia shines – unite, build a strong community, promote the role of ASEAN in the international arena.

Opening with the introduction of 30 congresses in the direction of the Lac bird on a bronze drum, lasting until the opening moment of the 31st SEA Games. The moment when the sacred dragon flew up thanks to the effect of 3D mapping technology (graphic presentation). , recreating the legend of the land spirit of the masterpiece and the miracle of the land of Thang Long, creating a grandeur.

Bamboo and rice are depicted through the performance of hundreds of artists combining 3D mapping technology, augmented reality, and extended reality. The moment the boy sat on a bamboo top played the flute among the vast trees and leaves, drawing a soaring scene. The bamboo tree symbolizes the bridge of solidarity and the spirit of friendship of the nations. The vast rice fields represent the wet rice civilization in Southeast Asia.

The lotus – the flower symbolizing the people and country of Vietnam – is shown through a dance performance by artist Linh Nga and 250 actors, combined with a 2m-long white lotus leaf props. Dong Ho paintings are introduced through symbolic images of 11 Southeast Asian countries and projected by light technology on the My Dinh courtyard. Lijiang lute artist and violinist Bui Cong Duy combine to perform songs in the conical dance with the title Road to Vietnam.

The general director said that the crew had about two months to prepare, the process of ideation, script development, artist selection, practice… for the opening show.

The festival part of the opening ceremony consists of five main scenes, gathering hundreds of actors who combine performance technology and make a visual impression. In it, there are many moments when bronze drums appear, sacred dragons fly or giant conical hats… create a grandeur.

Mr. Nguyen Huu Thanh – image and technology expert – said that the team used demonstration technologies such as 3D mapping, virtual reality… to create visual effects for the opening ceremony. As a result, online viewers can enjoy the image of a dragon appearing from the center of the stadium’s 8,000 square meter stage, curling up and then flying. Meanwhile, the live audience at the stage only saw the small dragon on the screen and the smoke rising.

Some Thai newspapers such as Sanook, Thairath, Siamsport commented on the opening ceremony was simple and impressive. Sheet Siamsport wrote: “The program depicts the culture and traditions of the country through the artists’ performances combining modern technology of sound and light performance. An interesting highlight is the image of 11 countries. Southeast Asia is expressed through Dong Ho paintings – the traditional line of Vietnamese paintings.

Sheet The Straits Times of Singapore wrote: “SEA Games returns to Vietnam after nearly 20 years with a brilliant display of lights and fireworks in front of more than 20,000 spectators filling My Dinh stadium”.