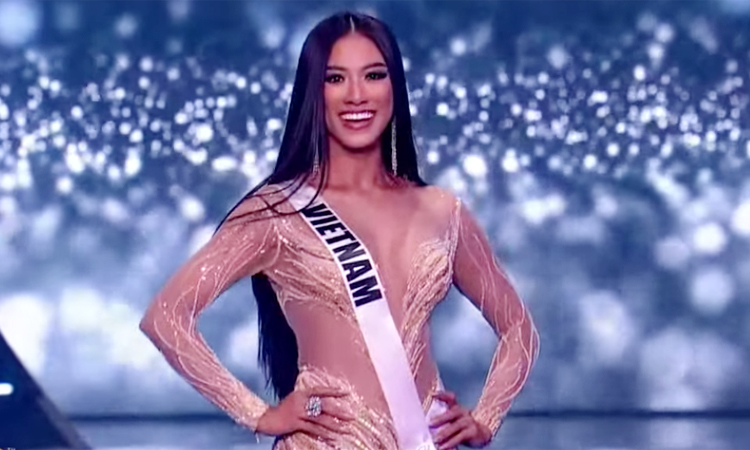 IsraelNguyen Huynh Kim Duyen performed with international beauties in the semi-finals of Miss Universe 2021, on the morning of December 11 (Vietnam time).

Kim Duyen showed that she was ready for the competitions from the moment she stood on the stage waiting for the performance. In the opening, when she chanted her name and country, she drew attention with a strong raise of her hand.

In the swimsuit competition, the beautiful Vietnamese catwalk was healthy, smiling brightly as she passed the judges’ seats. She also made an impression when she performed the evening dress with a metallic and rhinestone dress by designer Le Thanh Hoa. The outfit is inspired by the reflection of the river water that sparkles in the morning sunlight. This is also a familiar image in her hometown of Can Tho.

Kim Duyen was born in 1995, from Can Tho, 1.73 m tall, measuring three rounds 83-62-89 cm. The beauty who won the title of Miss Elegant Student at Southern Can Tho University 2016, Top 10 Miss Ao Dai Vietnam 2014. Kim Duyen attended a short course in Business Administration of Stamford Raffles University (Singapore) . She returned home to compete at Miss Universe Vietnam 2019, winning the 1st runner-up. After the contest, Kim Duyen mainly modeled and participated in community activities.

The semi-final is expected to start at 0:00 on December 11 (Vietnam time) in Eilat city, but it is about 30 minutes late for the organizers to prepare the stage. At the beginning, the contestants appeared in groups of four, chanting their names and countries in alphabetical order. Miss India, Philippines, representing the host country Israel … received a lot of applause from the audience.

The 80 beauties then split into five groups, catwalks with bikinis, Gottex one-piece swimsuits and gowns. Manar Nadeem Deyani – Bahrain’s first contestant at Miss Universe – wore a jumpsuit instead of a swimsuit.

In the evening gown competition, Miss Bolivia, Bulgaria, Cameroon… almost slipped but quickly stood up, laughed and continued on the catwalk. The Mexican representative lost his shoe and tried to handle it while walking.

The organizers announced a number of extra prizes at the end of the night. Miss Bahamas won the “Spirit of Carnival” award – who was judged to help other contestants feel welcome and respected. Antonia Figueroa – Chile’s representative – won the “ImpactWayv” award for an influential contestant on social networks.

Born in 1952, until now, Miss Universe is one of the most prestigious beauty contests in the world. The final takes place at 7 am on December 13 (Vietnam time), Miss Universe 2020 Andrea Meza from Mexico will hand over the crown to her successor. The jury includes “The most beautiful beauty in the Philippines” Marian Rivera, Miss Universe India 2015 Urvashi Rautela, Miss Universe 2016 Iris Mittenaere…