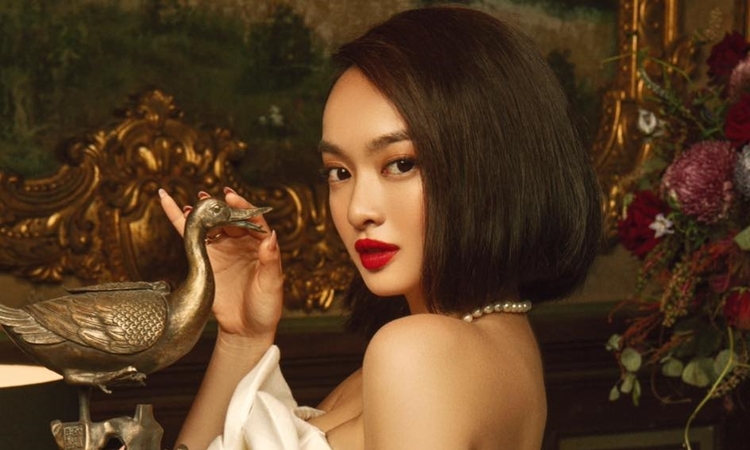 Director “scolded like a meal” on set, but Kaity Nguyen was happy that someone showed her her mistakes.

– What pressure do you face when following Diem My 9x, Lan Ngoc starring in the series “Very old girl”?

– I feel that I am not mature enough as two sisters. I asked directors Bao Nhan and Namcito why they chose to play the role of “old girl”. They explained that “old girl” has many meanings, not necessarily about age. I wanted to play a beautiful and powerful character, so I agreed, though a little concerned.

When the movie starts to start, I pressured because the final script is usually only taken by two directors close to filming time. This is a big challenge for young actors like me, but also creates a space to create rather than memorize.

– How did you transform into Ly Linh?

– Ly Linh is like me, successful at a very young age. Circumstances force her to be old before her age. As I dig deeper into the script, the more I feel that I and Ly Linh are one. I think the two directors also spent a lot of time getting to know Kaity, believing I was suitable for this film.

During my coffee trips, the director often asks difficult questions, interested in my future direction. They want to think, my style must match the character. I also went to class, Ms. Kathy Uyen studied, asking her to help me find out the features that need to be changed, new highlights. I believe the producer did not let me make any mistakes when I was on the film, because it was correct on the spot.

– Accompanying veteran actors like Hong Van, Le Khanh … how do you feel?

– Entering the profession at the age of 17 with film I’m not 18 yetI’m fortunate to work with famous artists and producers. While on the set, I always observed how my seniors worked, handled problems and learned what was not in school. I am the youngest in the film crew, but I am not flustered. On the contrary, I actively ask and take care of the uncles and aunts so that they can feel most comfortable working with me. Ms. Le Khanh often pulled me out to talk, give advice about the role. Seeing her enthusiasm, I feel that I am also more inspired and love the job.

In the film Very old girl, V, I was scolded by director Bao Nhan whenever I made a mistake. But I am not annoyed, must be strict to have the perfect product. My father always said that people cared for him. So the more I get scolded by adults, the more I like it.

– How do you find yourself changing after the role?

– The role of Ly Linh appeared right when I was growing up, in need of something different for my career when I passed the age of 20. I like Ly Linh’s personality and problem handling. She is strong, sharp, the type of woman I want to be in a few years.

I think in my person now, 70% of Ly Linh’s personality, 30% of the Kaity character. After the film was filming, many times going out to eat, chat together, my friends still said: “This part is Ly Linh enter.” I like this comment and feel grateful for having a role that teaches me so many things.

– What is your experience in a month of filming?

– Besides acting, I don’t have to invest anything because director and fashion director Do Manh Cuong take care of the image. I wore 30 costumes in the movie. Never had I seen so much connection with fashion. So much so, looking back at the clothes I used to wear, I want to cry because I remember going through the difficult scenes with it. I try to lose weight to dress, to look beautiful. In the end, Cuong had to tweak things a lot to fit my new measurements (laughs).

I was often allowed to wear very expensive accessories so I was always in a nervous state, afraid of losing. One time, filming in An Dinh Palace, a large and heavy earring was lost. I’m sure it didn’t fall to the ground, but people looking everywhere didn’t see it. The stylist suggested that I go upstairs to the altar room to pray. When I finished lighting up the incense, everyone was preparing to return, earrings fell from the dress.

– What do you say when you are said to have a lot of luck in your career?

– That is the correct comment, but I do not rely on luck. In the past, I used to have several successful projects, so the more pressure and the fear of disappointing people. My popularity came too early, it was easy to become delusional, perverted. I need straightforward, difficult people to pull myself back to reality. I am a worrying person, thinking a lot. Before every new role, I often get nervous and I can’t sleep. I think these feelings help me create motivation, focus to do better.

Kaity Nguyen was born in 1999 in Ho Chi Minh City and raised in the US. In 2017, I’m not 18 yet – Her first movie work with Kieu Minh Tuan – became the most popular Vietnamese film in history at that time. In 2019, she filmed Papa’s soul, girl’s skin with Thai Hoa. Her latest movies – Blood moon party – Achieved 155 billion in revenue after a month of release.