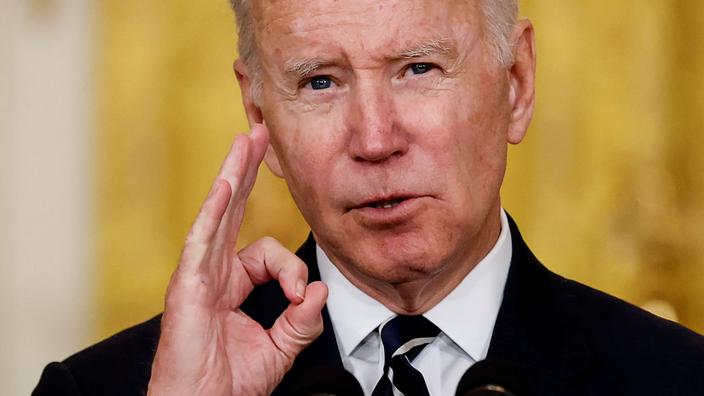 The new version of its “historic plan” should allow this vast investment program to pass the stage of the US Congress, but the prospect of a vote is still uncertain.

Joe Biden announced Thursday, October 29, before flying to Europe, that he had found the framework of an agreement for his “Historical plan” in favor of families and the environment, but the indispensable support of several elected Democrats in Congress for this text still remained uncertain. “I know we have the framework for a historic economic plan”, declared the American president after meeting in Congress the parliamentarians of his party. This frame “Will create millions of jobs, grow the economy, invest in our nation and our people”, he added during a speech from the White House.

He then left Washington for Europe where he will participate in the G20 in Rome and then in the COP26 in Scotland. The vast social plan, called “Build Back Better” has been fiercely negotiated for several months within the Democratic Party. Its adoption is supposed to trigger that of another plan of 1.2 trillion dollars of investments in infrastructure (roads, bridges …) which would offer Joe Biden an important political victory.

Two centrist senators, Kyrsten Sinema and Joe Manchin, opposed a first version of the social plan, deeming its amount too high and denouncing its financing by tax increases on companies or on the wealthiest households. Their votes are essential because the Democratic majority in the Senate is so thin that one dissonant voice is tantamount to a veto. To convince them, Joe Biden reduced the amount of the plan to 1.750 billion dollars over a decade, half less than initially announced. “We have made considerable progress”, reacted on Twitter Kyrsten Sinema, without clearly indicating whether she was ready to vote for the text.

No one got everything they wanted, including me. “

The left wing of the party, for its part, criticized these concessions. Independent Progressive Senator Bernie Sanders denounced the “Significant flaws” of the plan, particularly on health care. He has always stressed that without an ambitious plan, there would be no agreement on the plan to modernize the infrastructure. “Nobody got everything they wanted, including me”, commented Joe Biden, who has invested part of his presidency on the adoption of these major investment plans to reform America. “We agree on most things” contained in the bill, added the Democratic leader of the House of Representatives Nancy Pelosi, adding that the study of this document of nearly 2,500 pages had started. But the prospect of a vote still seemed very uncertain.

While attending the international climate summit in Glasgow (Scotland) next week, the president stressed that his plan included “The biggest investment ever made to tackle the climate crisis”. The Biden administration proposes to invest 550 billion dollars to reduce greenhouse gas emissions by 50 to 52% by 2030 compared to 2005 levels. It is an investment. “Unique (…) in history” American, which targets buildings, transport, industry, electricity, agriculture and water, had earlier underlined the White House. Joe Biden intends to present in Europe the image of an America engaged in energy transition and growth, as well as in the fight against social inequalities and tax evasion.

SEE ALSO – “We will get there, no matter when,” assures Joe Biden of his economic and social reforms

During the difficult negotiations, Joe Biden and his administration tirelessly highlighted the importance of these expenses, arguing that the United States is losing its competitiveness and is seen as a poor student among the advanced countries in terms of education, d environment or social protection. The White House notes that this plan would allow “For most American families to save more than half of their child care expenses” and “Will offer (it) two years of free kindergarten for each child aged 3 and 4”. Today, the majority of public schools in the country do not welcome children before the age of 5.

The White House maintains that this plan can be funded by “Large profitable companies” and Joe Biden assured Thursday that these expenses would not create an additional deficit. The project therefore contains measures to ensure that these companies “Cannot reduce their tax bill to zero” and include provisions for millionaires and billionaires to get more out of their hands. On the other hand, it does not include the tax on the super-rich presented Wednesday by elected officials, which supposed to tax the unrealized capital gains of billionaires, these dormant gains in the thick portfolios of stocks of great American fortunes.