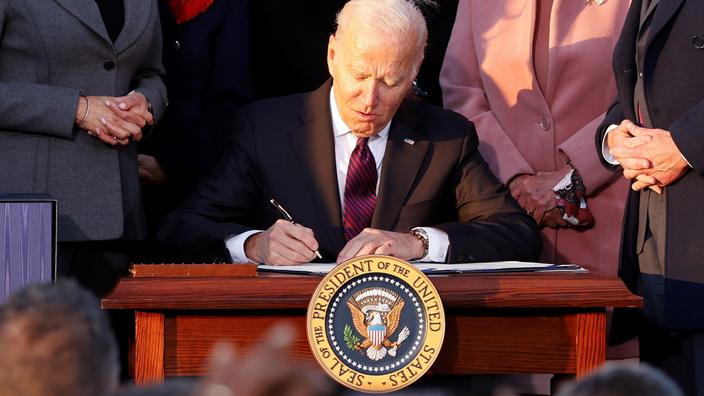 The US President signed his $ 1.2 trillion grand law to repair US roads and bridges in a ceremony with great fanfare in the gardens of the White House.

Hundreds of guests, a full fanfare and flags galore in the gardens of the White House: Joe Biden signed Monday under a gigantic infrastructure plan, a rare brightening for an unpopular president. “This is my message to Americans: America will move forward again and your life will change for the better”said a visibly perked up president.

In front of him, parliamentarians, members of his government and trade unionists frozen, despite the sun of this late November afternoon, which did not prevent them from applauding and cheering the various speakers. Joe Biden, faced with bad economic news and disastrous polls, wanted this ceremony with great fanfare to illustrate his vision of an America capable of consensus, a land of “Possibilities”. The law, painfully passed ten days ago by the House of Representatives, devotes 1200 billion dollars to the renovation or construction of bridges, roads, terminals for electric cars, water pipes.

It should also make it possible to develop public transport and high-speed internet. All of this, according to Joe Biden, will put America in the position of “To win the competition” facing China – the US President and his Chinese counterpart Xi Jinping will also have a virtual meeting on Monday evening (Washington time). The text garnered votes from the Republican opposition, to the chagrin of Donald Trump – the billionaire also wanted to launch a major infrastructure program, which never saw the light of day. The former president blasted the 13 elected Republicans who voted in favor of the text in the House of Representatives.

One of his followers, Marjorie Taylor Greene, even called them “Traitors”, and circulated their office phone numbers. In fact, few opposition leaders on Monday on the lawns of the White House, despite Joe Biden’s insistence on welcoming the fact that this law was supported by elected officials from both parties, in a country where partisan divisions are white-heated. Rob Portman, Republican senator from Ohio, spoke well, but he does not have to fear retaliation from pro-Trump: he will not stand for re-election in 2022, in a midterm legislative election that will take place. ‘announced very complicated for Joe Biden and the Democratic Party. While Joe Biden’s plans are popular with Americans, his confidence rating has steadily declined since the chaotic withdrawal from Afghanistan this summer.

The latest opinion poll from Washington post and the ABC channel, published Sunday, established the confidence rating of the American president at 41%. Only 39% of Americans approve of his economic policies, and 70% of them consider the economic situation in the United States to be bad. The world’s leading economic power has taken off with a bang, it is also experiencing a surge in inflation and supply problems, while the White House has not, as it promised itself, completely turned the page on the pandemic. What weigh on the daily life of this middle class to which Joe Biden continues to promise better days. The surge in prices also complicates another major project of the US president, less consensual than the infrastructure plan: $ 1,750 billion in social spending and aid for the energy transition, which must be examined this week by the House of Representatives. , then be voted on by the Senate.

There, impossible to count on the support of the Republicans, some of whom cry “socialism”, the worst possible scarecrow in the American political imagination. It will be necessary to convince the most central Democratic senators, and in particular Joe Manchin (West Virginia) and Kyrsten Sinema (Arizona), both present at the ceremony on Monday. The second, very discreet in public, surprised by speaking, and Joe Biden paid tribute to her in his own speech. The signing of the infrastructure law on Monday is less an end point than the start of a vast White House communications offensive. This week, Joe Biden will do the after-sales service of this text, and the promotion of the one that remains to be bragged about, in the state of New Hampshire (Tuesday) and in the large industrial city of Detroit (Wednesday).