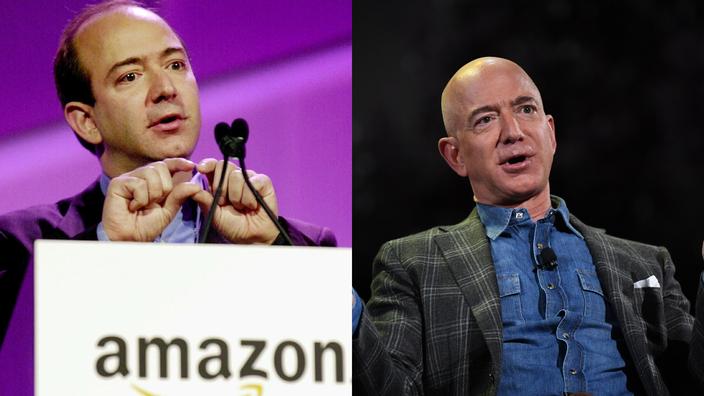 PORTRAIT- Twenty-six years after the birth of what aspired to be “the largest bookstore in the world”, this father of online commerce will step down as CEO of Amazon in 2021.

“The danger is not to evolve”. Jeff Bezos’ antiphon has never left him since the benches of Palmetto High School in Miami. Twenty-six years after the birth of what aspired to be “the largest bookstore in the world», This father of online commerce will step down as Chairman and CEO of Amazon in the fall of 2021. He will be replaced by his main right-hand man, Andy Jassy.

Jeffrey Preston was born in 1964 in Albuquerque, New Mexico. His father left the family home during his childhood, the young boy is adopted by the new husband of his mother Miguel Bezos, whose name he will take. In addition to his high school in Miami, this computer and reading enthusiast took science courses at the University of Florida, which allowed him to win the prestigious Silver Knight Award in 1982. Then a student, Jeff Bezos won name within Princeton University. He graduated in 1986 with a Bachelor of Computer Science.

At first, the ambitious young man embarked on a career as a financier on Wall Street, via the start-up Fitel, specializing in finance and telecommunications. Then, he was recruited by Bankers Trust Company in New York, where he was appointed vice president in 1990. He left the company the same year to join the technology hedge fund DE Shaw. Jeff Bezos will work there as a financial analyst for four years. At that time, the web was booming, with activity increasing at 2300% per year. And Jeff Bezos no longer hides his entrepreneurial urges.

From a local in Seattle to “internet king“

Amazon was born in a Seattle garage in early 1994. Initially named the Cadabra project, the computer program designed by Jeff Bezos wants to create “the largest bookstore in the world“. A year later, the start-up unveiled the Amazon.com online site to the public. Quickly, other various products come alongside the abundant range of book references available on the site. In 1997, Amazon, a pioneer in artificial intelligence, made its IPO.

Two years later, the Time propels Jeff Bezos on the cover of his magazine, crowning him “man of the year and internet king“. In 2000, Amazon set up its first giant warehouses in France. It was not until 2001 that the company began to make its first profits.

Also at the dawn of the 21st century, Jeff Bezos set out to conquer space. In 2000, he created the company Blue Origin in order to develop new technologies reducing the cost of access to space. The company is also aimed at space tourism. Since the spring of 2017, the entrepreneur has decided to sell $ 1 billion of Amazon shares each year in order to accelerate the financing of his moon landing project, Blue Moon.

In 2009, the Kindle e-reader took its first steps on the American market. And four years later, the boss of Amazon paid the American national daily the Washington Post with his personal fortune, for $ 250 million in 2013. During the presidential campaign of 2016, the newspaper was very critical of Republican Donald Trump. During his tenure, the president has repeatedly accused Jeff Bezos of using the influence of the newspaper so that “politicians don’t tax Amazon the way it should“.

Third largest employer on the planet

In 2017, the founder of Amazon became the richest man in the world. At the time, his fortune was estimated at $ 130 billion. That same year, Amazon passed the $ 1 trillion valuation mark on Wall Street.

Two years later, it is the personal life of Jeff Bezos that finds itself in the center of the scene. The entrepreneur announces his divorce in January 2019 with MacKenzie Tuttle after twenty-five years of cohabitation and four children, formalizing in parallel his affair with television presenter Lauren Sanchez. The divorce will cost him nearly $ 38 billion.

In 2020, a year marked by the Covid-19 pandemic, Amazon became the third largest employer on the planet with 1.2 million employees. In one year, Jeff Bezos saw his fortune jump by 20%. Social protest has nevertheless stirred up some of its warehouses

With more than $ 180 billion, he is now the second richest personality in the world, behind Tesla boss Elon Musk. The market capitalization of the e-commerce giant is Tuesday evening February 2 of 1683 billion dollars. And Jeff Bezos now owns 16% of the capital of the group he created.

By relieving himself of the daily management of his Amazon empire, Jeff Bezos will have more time in the next few years to fight climate change. In particular through its foundation The Earth Fund, launched a year ago and endowed with 10 billion dollars.