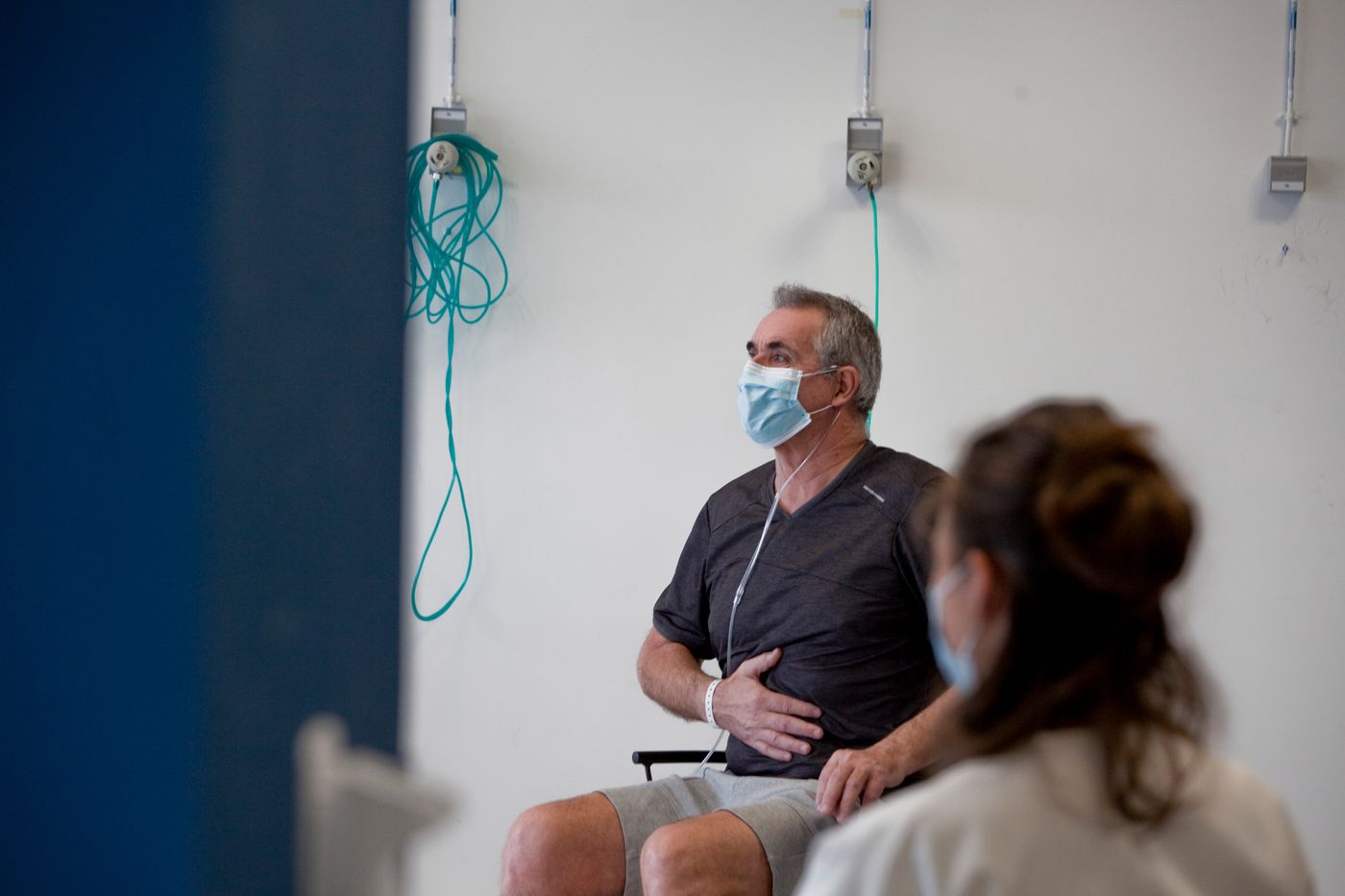 It falls on him sometimes, without warning. When he’s in a crowd, when he sees pictures of hospitals in the West Indies, or even alone at home. “That” is a dull anguish which embraces him, the beep of the machines, which he hears again. In April 2020, Hugues, 23, was admitted to intensive care in a hospital in the Ile-de-France for a severe form of Covid. “That”, sixteen months later, are the after-effects of this stay in a fragile in-between.

→ ANALYSIS. Covid in the West Indies: the “extraordinary” aid to hospitals

Since the start of the pandemic, in March 2020, 90,000 patients with Covid have stayed in “sheaves”. At the height of the crisis, up to 7,000 of them were hospitalized at the same time, in these specific services. For a usual capacity of 5,000 beds.

“Resuscitation is always a test”

Hugues had ” luck “, he always remained conscious. “I was in my bed, supplied with oxygen through a mask, but I was never intubated. “ Intubation is this moment when, to prevent the patient in lack of oxygen from suffering too much, the doctors decide to plunge him into a coma and let mechanical ventilation take over, via a tube inserted into the trachea. .

Philippe Herbel, 45 years old. Cindy, 35 years old. Laurent, 43, experienced this tipping point. “I do not recommend. The sheave is not just sleeping while waiting for things to get better “, pings Philippe Herbel.

Excluding Covid already, “A passage in intensive care is always a test”, notes Professor Étienne Gayat, head of the crisis unit at Lariboisière hospital. It’s painful, invasive. The Covid, with its multiple attacks (cardiac, pulmonary, neurological), rapid degradations, made it even more tumultuous.

And if the care saves lives, the stay leaves traces: “50 to 70% of survivors in intensive care units develop post-resuscitation disorders”, underlined, in 2019, a study conducted by Sfar, the French Society of Resuscitation.

First, the physical and physiological sequelae are the most obvious: hypertension, diabetes, respiratory, renal, cardiac, motor problems, etc. “When the patient wakes up, you have to relearn a lot of things: to coordinate their movements, to re-stimulate their muscles which have melted, to breathe alone”, details Étienne Gayat. A path of patience.

“The doctors warned me, it will take me several months before recovering my abilities”, says Laurent, hospitalized at the end of March 2020, at the start of the first wave. Eighteen months later, and after weeks of rehabilitation, the 40-year-old left his wheelchair but still leans on a cane when he goes out. The nerves in his feet were weakened by weeks of inactivity.

“I was sure the caregivers wanted to send me to North Korea. ” He even tried to ” to escape “ from his bed. Cindy, hospitalized in Nancy, in November 2020, also confides “To have gone very far”. She believes well, one day, “To have bitten a nurse”. And still blames himself. “The teams took so much care. ” But when caregivers in protective suits look like cosmonauts and you’re confused, it “Does not help to heat up the atmosphere”, quips Hugues.

For the student of agrochemistry, humor has become catharsis. He laughs, but remains marked for life. The neighbors in the rooms next door, “Who did not survive”, the “Body bags” in the corridors, it doesn’t “Don’t forget”. Nightmares sometimes continue to populate his nights.

→ INVESTIGATION. In intensive care units, the temptation to leave

For many, the stay in a sheave was indeed a first confrontation with death. “After I was released from the hospital, I suddenly realized that in fact I had almost died, Hugues remembers. I arrived in tears at 3 am in my parents’ room. Two or three weeks later, I went to the shrink. “

Concentrated on recovering from the physical sequelae, the patient does not immediately perceive the repercussions. Cindy admits it: “It was the shrink with whom I was going to start therapy, for personal problems unrelated to the Covid, who made me understand that my stay in the realm had perhaps had more impact than I thought. ” Examples? “Flashes where I relive scenes. An inability to listen to the radio, because it was often on during my coma. “

“In front of the others, we find ourselves naked”

Patients experience a real ” post-traumatic stress “, decrypts Étienne Gayat. Similar to that caused by any “acute” event such as an attack, an accident, etc. Relatives are affected by ricochet. Especially since the restrictions on visits made them experience this suspended time from a distance. “It still haunts my wife”, comments Laurent, the survivor of the first wave, who admits to having from time to time “Blues” and have become “Hypersensitive”. In the eyes of those close to him, he is a “Miraculous”.

Few, however, are those discharged from intensive care who regain their quality of life before. The “after” remains unclear. The disease has turned life and professional projects upside down. Cindy, computer developer, should have been hired on a permanent contract. The procedure is “On stand-by” : “I’m still so tired. ” All of them have become aware of their fragility. “Lying on his bed, we understand what the word to depend means, notes Philippe Herbel. In front of others, we find ourselves naked, both literally and figuratively. “

→ EXPLANATION.Fourth wave, are we right to worry?

What to bring a new outlook on life? He says he has become “Much more zen”. “To get angry, from now on, you have to go!, he said laughing, but maybe it’s because of the drugs. “

For Cindy, it is promised: she will ” to take care (from her), (s’) listen more “. The thirty-something ” deceives death “, who had already experienced resuscitation after a pulmonary embolism, wants to give back its place to the essentials, too. “Now I want to do what really matters to me, Philippe Herbel joins her. I liked my old job, marketing consulting, but that doesn’t appeal to me anymore. “ His project: writing a book, to testify.

And so much the worse for the attacks of “covido-skeptics” and other anti-vaccines who accuse the survivors, on social networks, of being actors. He knows, on the contrary, that behind the figures, the statistics, ” there are people “. “Talking, raising public awareness, it feels good. It makes sense of what happened to us. “

→ PODCAST. “Covid-19, when everything changes to intensive care”

Hospitalization. A patient returns to intensive care when one of his vital organs (heart, lungs, kidney, liver, etc.) fails. The length of stay can be from a few hours to several weeks. Upon discharge, the patient is transferred to one of the hospital’s conventional services (internal medicine, pneumology, cardiology, etc.). Then must undergo rehabilitation, in follow-up care and rehabilitation centers.

Memories. The absence of memories of days spent in intensive care, traumatic for the patient, was monitored by a research group led by Professor Elie Azoulay (Saint-Louis hospital). Keeping a diary, filled out by caregivers or by the family helps to fill these “black holes” and to support the patient in his relation to time.

Relatives. Faced with the impact of post-resuscitation syndromes on families, a crisis line, Famiréa, should open at the start of the school year.