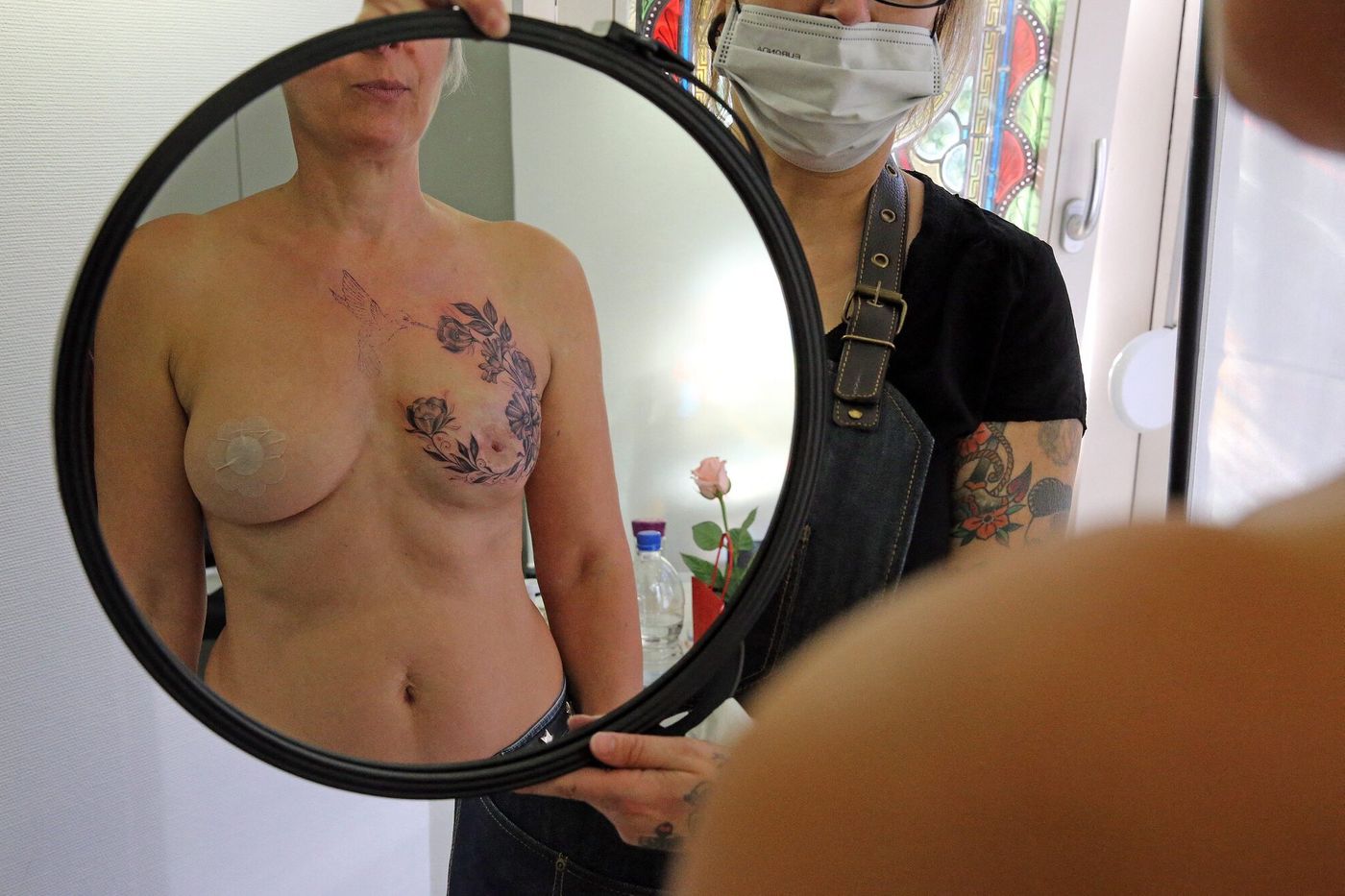 Orchids, leaves and other small flowers tattooed in black ink bloomed two years ago on Aurélie’s milky skin, where her right breast was. Removed due to cancer, he left room for an unsightly scar on the chest of the young woman of 37 years. The League Against Cancer estimates that more than 54,000 breast cancers are diagnosed each year in France. And, like Aurélie, nearly 20,000 women undergo a mastectomy: the removal of one or both of their breasts to remove the cancerous tumour.

However, only 30% of them have their breasts reconstructed, estimates the High Authority for Health. “Often, it is necessary to plan an average of 5-6 reconstruction operations because it is rare that it works the first time”, explains Mélanie Courtier, director of the association Jeune et Rose. “The course is very heavy, with uncertainty as to the result. »

The aftermath of the reconstruction

This is what happens to Aurélie who, after a major infection linked to her reconstruction, finds herself with “a straight scar as if drawing a line with a ruler”. For Valérie, diagnosed with cancer in 2014, the experience is similar: “After ten days, my skin became necrotic, everything had to be removed. » She ends up with a scar, “57 centimeters of failure”, that she can’t stand. For many patients, these stigmata weaken self-confidence and damage femininity. “I couldn’t look at myself in the mirror anymore. I was crying to see that.” says Aurélie. It was then that she discovered the Sœurs d’encre association.

Established in Bordeaux since 2017, the structure supports women with breast cancer through artistic tattooing to help them rebuild their lives. If tattoos cannot give the rounded shape of a breast, they are a solution “simpler and less invasive” so that women accept each other physically and psychologically, explains Nathalie Kaïd, president and founder of the association. “With the tattoo motif, the volumes of the chest are rebalanced, it’s quite magical”, she illustrates. It is enough “one to two sessions” to find a harmonious chest.

A technique that has more and more success. Nathalie Kaïd counts “about 500 tattooed women” thanks to Ink Sisters and “about sixty tattoo artists referenced throughout France”. All received medical and technical information with a surgeon. “We have a scientific committee and an established protocol. Cancers evolve and so do treatments, we need to know what we can tattoo or not », insists Nathalie Kaïd. Once the scar “acquired and stabilized”, there is no contraindication to tattooing, specifies Marion Fournier, senologist surgeon at the Bergonié Institute, in Bordeaux – “except for technical constraints such as particularly thin skin or the very rare cases of skin relapse”.

“You can be a woman without breasts and beautiful”

And the metamorphosis operates. For Valérie, the tattoo was “the beginning of the complete reconstruction”. Aurélie can now “Looking without seeing the catastrophe of a breast that is not round. It took me a while but yes, I managed to turn the pageshe says. I see this magnificent orchid and I live again through this flower”. Without the help of Soeurs d’encre, which allows women to get a tattoo for free each year in October, the two thirty-somethings would not have passed the tattoo mark, which is far too expensive.

Eventually, Nathalie Kaïd wants the tattoo “be systematically offered to women as a real reconstruction solution after cancer”. With this in mind, a partnership was created between Soeurs d’encre and the Primary Health Insurance Fund (CPAM) of Gironde in September 2021. It allows, subject to resource conditions and for only those affiliated to the CPAM of Gironde, to be reimbursed for the repair tattoo. A step welcomed by Mélanie Courtier, who hopes that “It will be broadcast in all regions. I think it will help a lot of women who are hesitant to take the plunge”. And Aurélie adds: “With tattoos, you can be a woman without breasts and beautiful. »
——————-

There are two main types of reconstruction: the use of an internal prosthesis (breast implant) or the use of tissue – skin, muscle and fat – from other parts of the body (flap reconstruction). Sometimes the two approaches can be combined.

The reconstruction is always done in several stages: it is first necessary to rebuild the volume of the breast, then to harmonize the two breasts in order to improve the aesthetic result. Finally, an intervention can be proposed to redo the area of ​​the areola and the nipple.