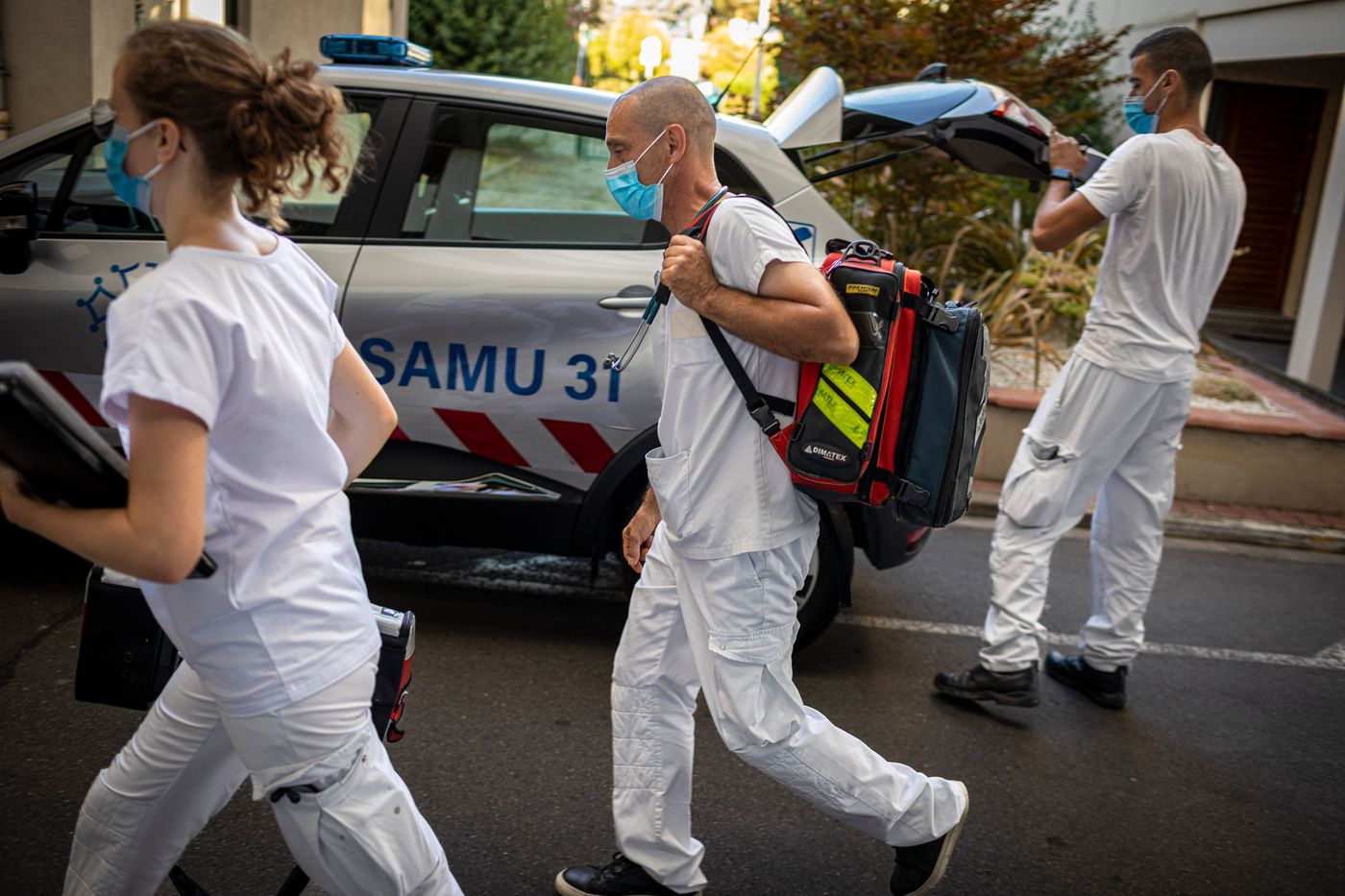 As always, it starts with a call. At the end of the line, joint pain, a sudden fever, a racing heart. In this waltz of dread and stupefaction, the Toulouse Samu reassures, guides and advises. This summer – “worst summer” as described by Vincent Bounes, the head of the service (1) -, 1,000 people contact 15 daily. The number is often reassuring, when it does not save lives. “In more than one out of two cases, an ambulance is not sent to the scene”, explains the paramedic. The “very serious emergencies”, they represent only 7% of cases.

Behind the shaggy beard and the bags under the eyes of Vincent Bounes, we guess disarray, and a lot of fatigue. Extended hours, lack of staff and the whims of a virus that comes and goes draw the outlines. But the list is not finished. “People can’t find doctors anymore. During the holidays, some leave without having a replacement, which was not the case a few years ago”, does he breathe.

A shortage of doctors

In 2025, 520 general practitioners out of the 1,153 in the Toulouse metropolis will retire, according to the Order of Physicians. To remedy this shortage, Vincent Bounes took the lead. In April 2020, with the support of the Regional Health Agency, he created a mobile team of six general practitioners for home consultations, placed under the aegis of Samu: the VL7. The approach, unprecedented in France, has since been awash with requests, to the point that the summer of 2022 saw the creation of a second team, made up of medical interns. “This is temporary” wants to believe Vincent Bounes. His smile suggests otherwise.

This Monday, August 8, in suffocating heat – the thermometer reads 36°C – Bertrand Valdeyron, bald head and slender silhouette, is leading the operations. At 60, this liberal doctor from Auzeville-Tolosane (south of Toulouse) devotes six days a month to Samu. Nicolas, a 27-year-old paramedic, and Salomé, a fourth-year extern, complete the team. The first embarked on the adventure a year ago; the second was baptized that day at the VL7.

About eleven o’clock. After a quarter of an hour on the road, the trio begins their first intervention. In the Korian Grand Maison nursing home, in Union (north-east of Toulouse), the Covid struck again. Juliette, one of the 110 residents, was no exception. Fatigue, coughing fit: what would seem trivial for many takes on another dimension for the 98-year-old lady. Gloves on, Bertrand Valdeyron and Salomé enter his room. They introduce themselves, twice, explain the reason for their visit, then take out the “scope” (or surveillance monitor), a kind of medical Swiss army knife, allowing heart rate or pulse to be measured.

Does Juliette understand everything that is happening to her? Her impassive face leaves nothing to guess. From the corridor, Nicolas notes the tension and the temperature dictated by Bertrand Valdeyron, when another resident approaches. We look at her, she ignores us. Then engages in a series of back and forth: 10, 15, maybe 20. Imperturbable, she too has the secret of her world.

Withdrawn since the beginning of the intervention, Émilie, a nurse who arrived in the structure three years ago, says: “His doctor takes care of three-quarters of the residents. As he is on leave and has not found a replacement, we are helpless. » Like other nursing homes, the establishment no longer has a coordinating doctor. ” It has been a year “she laments.

The Samu drowned by the calls

Back in the Samu car. Bertrand Valdeyron takes stock: “These people are hanging on a thread.” In a few days, Juliette will have to be examined again. “But it’s impossible for us, because our role is not to replace the attending physician.” Inside the vehicle, the air conditioning fails to cool the air. From time to time, Nicolas activates the siren, weaving in the traffic. When a driver refuses to deport, Bertrand Valdeyron ironically: “Surely one who failed to join the Samu. »

The quip alludes to a recurring criticism. In 2018, Pointrevealed that nearly 4 million calls, out of a total of 29 million, were not taken into account by medical dispatch assistants throughout the country. The same year, the Toulouse Samu was also “drowned”such as emergencies and private clinics. “We were forced to call on Régul’ 31, an association of retired doctors which provides a hotline”, remembers Bertrand Valdeyron.

Second stop, at Muret (south-west of Toulouse). Michel, 85, had a fever and muscle aches all night. The refrain repeats itself: doctor on vacation, no substitute. While Bertrand Valdeyron discusses with Michel’s wife, Salomé feels the patient, nailed to his bed. Opposite, the portraits of his grandchildren – he painted them by hand – stare at him benevolently. Ten minutes later, Bertrand Valdeyron tests the external: “Do you have any idea what we can prescribe for him?” » Once the prescription is finished, the doctor makes one final recommendation: “Above all, there should be no sun in the room! » Michael’s conclusion: “I who wanted to tan…”.

Danielle, 76; Denise, 98; Guy, 72 years old. As the interventions follow one another, the typical profile of VL7 patients emerges. There are a few young people, but dependent elderly people (PAD) are overrepresented. It must be said that this population often resorts to general practitioners. According to a survey by the Department of Research, Studies, Evaluation and Statistics (DREES) in 2014, each GP has an average of 21 PADs in their patient population.

“We also sometimes have disadvantaged people”, notes Bertrand Valdeyron. Like Marianne, 50, resident of the Bourbaki city, a priority district of Toulouse. She admits that she does not speak French very well, then asks impatiently when she can work again. Immobilized by low back pain, she was arrested for another six days. An eternity, among people for whom employment is synonymous with survival. But Bertrand Valdeyron maintains: “You have to see the attending physician. » At the end of the consultation, he recognizes however: “The problem is that a lot of people don’t. » 5.4 million French people, precisely, according to 2020 data from Health Insurance. GPs no longer want to take patients, they already have too many.

20 hours. The day is over. Sweat soaks the t-shirts, the faces are red from the crumpled masks. Tomorrow, two other teams will be on the field. One wonders then how do they manage to keep up the pace. Bertrand Valdeyron, he still has the energy to have fun: “Compared to a normal day in my office, this is nothing. »

In the Toulouse conurbation, 1,153 general practitioners work for more than a million inhabitants, barely one practitioner for 1,100 patients, according to the Order of Physicians.

According to a survey by the Samu-Urgences union in France, the Samu regulation centers saw their activity increase by 21% in July 2022, compared to the same period last year.

Out of 2,500 medical dispatch assistant positions, 800 are vacant, according to the French Association of Medical Regulation Assistants, questioned by The chained Duck Wednesday, August 17.

Nearly 1.6 million French forgo care every year, according to a Senate report from March 29, 2022.