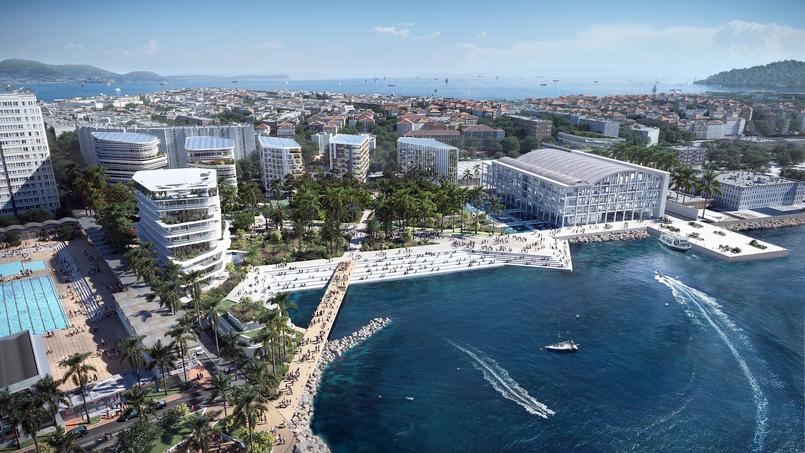 The coast of Toulon, in the Var, will experience a profound change which aims to open the city on the harbor, the immense body of water overlooking the Mediterranean Sea. A major project which should see the light of day in 2026 and the cost of which amounts to 150 million euros. It is the consortium formed by the builder-developer Eiffage Immobilier, Icade Promotion, the architectural firms Corinne Vezzoni et Associés, Snøhetta and HYL Paysagistes, which was named the winner, within the framework of the call for projects “The future from the harbor of Toulon- from Mayol to Pipady ”, launched by the Métropole Toulon Provence Méditerranée, Tuesday 7 December. Corinne Vezzoni’s agency is already at the origin of another district in Toulon, the Chalucet eco-district, between sea and mountains, which gives a predominant place to nature.

The former DCNS, currently Naval Group, a French industrial group specializing in naval defense construction, has ceded land on the coast. From military sites, they will be transformed into a living space open to the sea, articulated around the park, and will now embody the symbol of a meeting between city and water, thus experiencing an urban and landscape requalification. “We are delighted to be able to work again on a major project which recounts the reconquest of Toulon towards the sea and traces its history and its military past. All our work has been to rediscover the memory of this place and to offer access to the sea in the heart of the city.», Explains architect Corinne Vezzoni.

The 44 hectare site, going from the Mayol stadium to the beach of Pipady, will therefore present itself as a real extension of the city center and will offer two “walks”, which will redraw the harbor: a “coastal promenade” along the seaside and an “urban promenade” along the main roads from the town hall to Pipady. A new backbone for the city. In addition to a large public park of nearly 2 hectares, “which opens the gaze towards the horizon and recounts this passage from the mountain of the Toulon mountains towards the sea», According to Corinne Vezzoni, he will have several equipments.

On the program: a new cultural space located in the Halle Marine, a top-of-the-range Marriott 4 * hotel-spa, a hybrid complex combining co-living and co-working, workspaces, an exhibition hall and shops, sports facilities, restaurants and a local brewery. Structures “with non-rectangular shapes, very flexible, in order to leave the urban and its orthogonality to announce more freedom and evoke the curves of the sea ”. “Nature is the key element», Specifies the architect. The large hall which was used to store torpedoes or war machines is preserved, witness to the military history of the place.

Water in all its forms

The project will develop with Dalkia Groupe EDF a thalassothermal network using renewable energy from the sea to heat and cool the district, the water being hotter than the air in winter, it heats buildings and vice versa in summer. . “Mediterranean nature invades the entire site around the themes of water in all its forms: fresh water, salt water, rainwater, aquatic plants and thalassothermy», Assures the architect Corinne Vezzoni. A second lot housing the former Môle des Torpilles, a military building located at the entrance to Toulon harbor, will be transformed into a restaurant, a performance and leisure space.