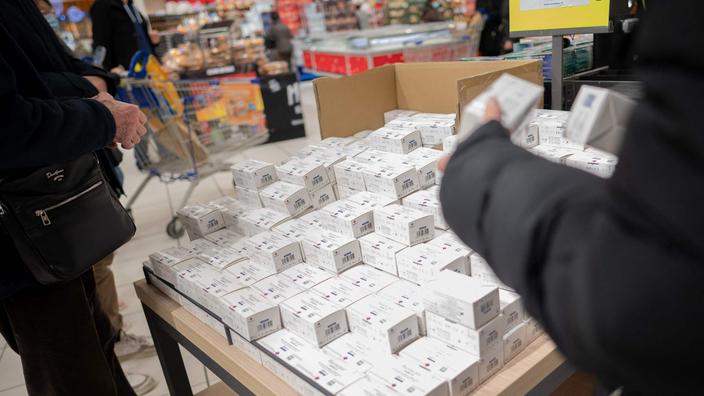 At E. Leclerc, 1 million tests have been sold since the end of December and three times more at Intermarché. Professionals seem reassured by the quantities in stock.

“For the moment we have sold nearly a million self-tests [au 9 janvier]. We get our supplies without any problem. We manage to have lower prices: we find them between 1.1 and 1.15 euros and sell them for 1.24 euros, at cost price», Declared this Tuesday the president of the Strategic Committee of E. Leclerc Michel-Édouard Leclerc at the microphone of RMC. Supermarkets are authorized to sell self-tests from December 28 until the end of January. For his part, the president of Intermarché Vincent Bronsard said this morning on Classic Radio that the network had sold 600,000 boxes of five to date, or 3 million swabs. He also said that six million would be delivered soon. At Auchan, the distribution amounts to nearly 930,000 tests. At Carrefour, it is said to have sold 1 million tests since December 28. That is to say about 6 million at these four distributors.

As for pharmacies, Philippe Besset, president of the Federation of Pharmaceutical Unions of France, 7 million self-tests were passed between January 3 and 9, a few hundred thousand last week. “And again, this only concerns the self-tests supported when we are in contact. Friday, pharmacies had six million in stock and ordered eleven million. Of course, the situation is heterogeneous: a third of pharmacies are out of stock», He specifies in Figaro.

Read alsoCovid at school: Castex relaxes the protocol, three self-tests will be enough for contact cases

New arrivals welcome to the health protocol in schools. Monday evening, Prime Minister Jean Castex announced on France 2 that children should do three self-tests in four days, to be collected free of charge from a pharmacy, as soon as they are in contact with them to continue going to class; instead of PCR or antigen followed by two self-tests. “The stock is sufficient“, Comments Philippe Besset, adding that he was”no longer possible to carry out PCRs on 5-year-old children“. Distributors and pharmacists are on a war footing while the incidence rate exceeded 2,770 positive cases per 100,000 inhabitants on January 7, according to public health reports in France.