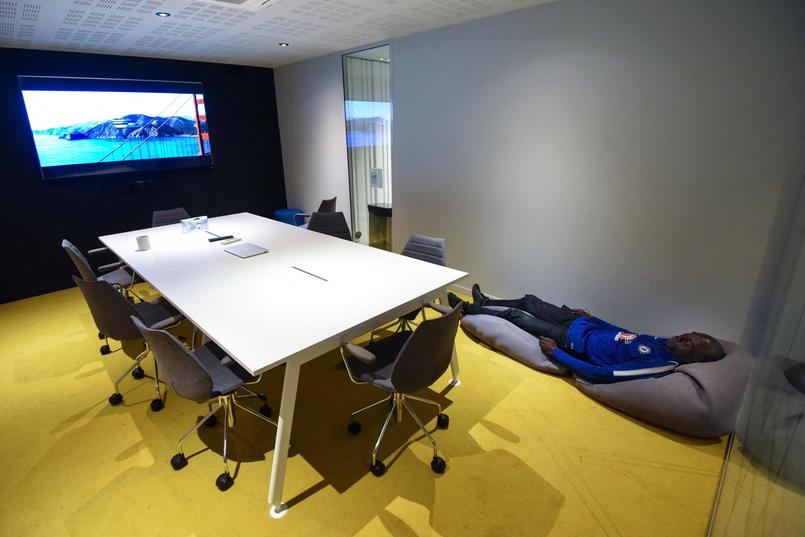 For employees, it’s a meeting room. For Fortune, in the evening, it’s a comfortable living room. This former homeless man found refuge there through the Bureaux du cœur, a Nantes association that allows the most vulnerable to spend the night in company premises. Fortune, 39, gladly shows around its thirty-five square meters: here, the meeting room transformed into a living room, equipped with a television. There, a small bedroom space, concealed by a curtain during the day. Finally, the shower room and the kitchenette, fitted out in the toilets.

From 5.30 p.m. until the next morning, he can close the sliding door that separates his living space from the rest of the offices of Nobilito, a communication agency based on the island of Nantes, and enjoy his tranquility. After studying fashion and starting a costume designer, Fortune was “Fallen into the galley”. Since having a roof over his head, he imagines himself building a career again. “When you spend the day wondering where you will spend the night, it’s impossible to make plans, to find stability. Here, I can ask myself, think ”, explains Fortune, sitting on her sofa bed.

Like him, 38 people are accommodated for three renewable months via the Bureaux du cœur, in Nantes but also in Le Mans, Annecy, Montpellier and Essonne. “This project is aimed at poor workers, students in a very precarious situation, asylum seekers, refugees, women victims of violence who have had to flee their homes”, lists Pierre-Yves Loaëc, founder of Bureaux du cœur and boss of Nobilito. Within four years, he hopes to convince 1,500 companies and establish himself in 150 French municipalities, “metropolises like medium-sized towns”.

Before being accommodated via the Bureaux du cœur, Eric, a Congolese refugee, saw his RSA every month absorbed almost entirely by short-term rentals. “After paying for my apartment, I had 50 euros left to live on. Now I can buy food, pay my phone bill ”, explains the young man of 30 years. He has been living for two months in the Nantes premises of Agile RH. Looking for a job in the IT sector, he hopes once hired to be able to benefit from social housing. “It’s better here, but it’s a middle ground”, adds Éric.

Installed in an old apartment, the company already had an equipped kitchen and a bathroom. “We had all the infrastructure to accommodate someone with dignity. Fine words and donations have their limit, this time it was a question of concrete action ”, says Simon Rabouille, associate director of Agile RH, of which Eric is the second “Guest”. At nightfall, once the sofa bed is unfolded, one of the two meeting rooms becomes a bedroom. In the event of a late appointment, employees are requested to notify Eric.

To see also –Go to a shower, see a dentist … London launches multi-function buses to help the homeless

Go to a shower, see a dentist … London is launching multifunction buses to help the homeless – Watch on Figaro Live

On the accommodation side, the offer of the Heart Offices is subject to strict conditions. “People must be of legal age, have no addiction problem or heavy medical treatment, live alone, and agree to respect the company’s schedules”, details Vanina Thiriet, guest delegate for the Bureaux du cœur. “We are not going to solve the problem of poor housing in France, recognizes Pierre-Yves Loaëc. But we can help. ”

Once the criteria have been validated, the connection between “host” and “guest” is done via associations to help reintegration. “We, entrepreneurs, are not trained to support people”, underlines Pierre-Yves Loaëc, who nevertheless claims a “Strong social ambition”. In addition to a place of accommodation, the welcoming company is, according to him, an opportunity for the guest to meet “inserted” employees able to provide them with professional advice. With the help of Nobilito, Fortune gave his CV a facelift. Eric was told how to navigate the French job market.