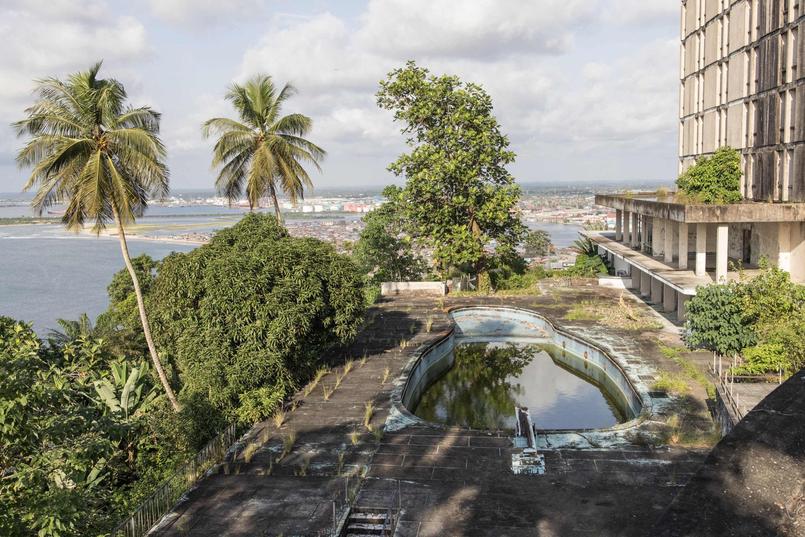 Some decrepit palaces bear traces of their abolished splendour. Not the Ducor, a parallelepiped of concrete stripped of its luxury and its windows by a troubled Liberian history whose sufferings it materializes, overlooking Monrovia. When it opened in 1960, the Ducor was one of Africa’s first five-star hotels. For years, its staff has catered to the demands of wealthy and worldly leaders, such as former Ethiopian Emperor Haile Selassie. In 1989, it was closed at the start of the first of two civil wars which were to bloody Liberia and kill 250,000 people from 1989 to 1997, then from 1999 to 2003.

” READ ALSO – In India, this university building blends into the landscape

Physical marks of these ordeals are rare in Monrovia. The Ducor, among the trees on a height of the capital, retains a breathtaking view of the Atlantic. Below is the slum of West Point. On 10 levels are staged corridors and ghostly rooms with paint blackened by infiltrations, flights of stairs without railings, terraces won over by vegetation and crossed by empty elevator shafts.

In the pool with his gun

Intense natural light streams through the structure, which could evoke an abandoned factory were it not for the faded turquoise ceramic pool where, according to an unsubstantiated anecdote, former Ugandan dictator Idi Amin bathed without taking his weapon away. . In the basin stagnates a greenish water. The surrounding land has become a den of drug addicts. “It saddens everyone”, breathes Ambrose Yebea, a retired official from the Ministry of Tourism, who once offered tours of the abandoned hotel.

There were few hotels in Monrovia in the 1950s, hence the construction of the Ducor in 1960 to house businessmen and government officials, he said. The plans were entrusted to the Israeli architect Moshe Mayer. Golda Meir, then Israeli foreign minister, and the independence leader of neighboring Guinea, Ahmed Sékou Touré, attended the opening ceremony. Vintage photos show a glitzy building, with guests sipping cocktails by the pool. Hosted at Ducor, the first president of Côte d’Ivoire, Félix Houphouët-Boigny, had been conquered, to the point of mandating Moshe Mayer to do even better in Abidjan. The Ivoire hotel is still in operation there.

Many African leaders stayed at the Ducor in the 1960s and 1970s, including during the Organization of African Unity conference in Monrovia in 1979. A World Bank report from 1975 suggests the decline had already begun . After closing in 1989, the Ducor served as a cantonment for Liberian warlord Charles Taylor’s men during the 2003 siege of Monrovia. the war. She initiated renovation plans. In 2011, the government entrusted Ducor to the Libyan African Investment Company (Laico), a subsidiary of the Libyan sovereign wealth fund.

The new Ducor formula was to have 150 rooms, restaurants, a shopping center, a tennis court and a casino, and to create jobs, indicates an official press release from the time. But another war was fatal to the project, the one in which Libya sank. Liberia then severed ties with Muammar Gaddafi’s Libya, and work ceased.

“It shocked us a lot, recalls Frank Williams, who says he was one of the 150 Laico employees. Today, we don’t have a job.” Ducor’s fate is undetermined. Neither the Liberian presidency, nor the Ministry of Tourism, nor Laico responded to AFP’s requests. Laico is under EU sanctions over its alleged close ties to the former Gaddafi regime. Some still hope to see the Ducor reborn. It could attract tourists and generate jobs, hopes Ambrose Yebea, the retired civil servant. “All Liberians agree on this: they want the hotel to be refurbished”, he assures.