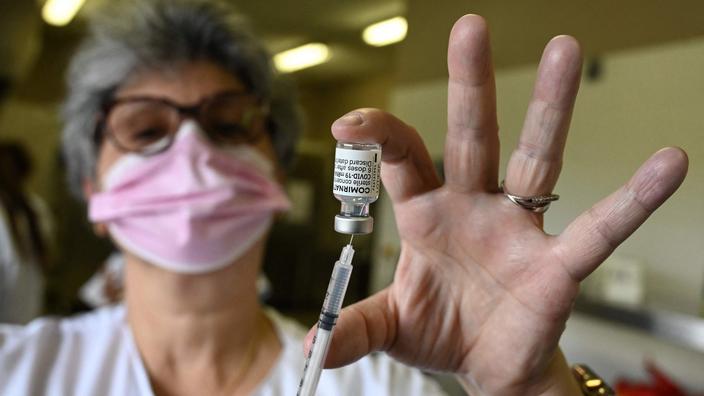 TESTIMONIALS – Between the rebound of the epidemic and the vaccination campaign, personnel needs have never been greater.

“I didn’t think about it at all, it made sense to me to help“. Like Geneviève, 73, many nurses, orderlies, doctors and other medical professions have come out of retirement to participate in the vaccination campaign. An essential reinforcement to reach the goal, set by the government, of 30 million adults vaccinated in June.

Read also :For the WTO, vaccination is the key driver of global trade

This doctor, first a pediatrician before specializing in oncology and bone marrow transplantation, decided to put on the gown again as soon as her successor called her to work in a vaccination center in Montpellier. “I wanted to participate in January, but my husband was not yet vaccinated, it was too risky. So I had to wait until mid-March, that he received his second dose“. Its role is to verify the information on the forms filled in by the future vaccinated, to ensure that no specific follow-up is to be expected. The vaccination itself is done by nurses. Among them are many retirees, as noted by Dr. Labrousse, endocrinologist in Toulouse, who spends part of his free time helping in a vaccination center at the University Hospital in Toulouse. She sees the importance of this additional workforce every day: “of the three nurses at the center there are two retirees», She explains. This volunteering is an extremely positive experience for this doctor, who appreciates the atmosphere “benevolent“And”a good moodWhich reigns there.

Read also :Covid-19: can we choose the vaccine we receive?

The extent of the immediate mobilization of retirees “almost fifty answered the call”To help in the vaccination centers impressed the human resources department of the CHU. This help is essential for hospitals, as the current pressure, with the increase in people in intensive care, leaves no room for maneuver. “Without them we could clearly not have a vaccination center», Explains Cécile Abella, HR Director at Toulouse University Hospital. In fact, 80% of the staff who participate in the vaccination are retirees. And this is not an isolated case “all CHUs are in the same situation»We confirm in Toulouse.

The stake is however enormous. A real race against time is underway. After having started slowly, the vaccination campaign must now accelerate and reach 400,000 injections per day. The problem of late deliveries tends to be resolved with the ramp-up of the production rate, France receives millions of doses every week and more than ever needs personnel to vaccinate. No hand is too much, after retirees, pharmacists have been called in, then firefighters and, more recently, veterinarians and dentists. During his speech on March 31, Emmanuel Macron recalled that in total more than 1,700 centers and 250,000 health professionals were mobilized to vaccinate.

A source of fulfillment

Beyond duty, this experience offers real added value for retirees. Doctor Bonnière, a former private gastroenterologist, retired for two years, is full of praise for his new experience in a vaccination center: “since I returned to service I have been happier, and not that, it’s very formative“. For him, motivation goes without saying: “we have a job where we serve people, so the goal is to serve a little more“.

It’s more complicated in terms of logistics. During the first wave, the Regional Health Agencies of Île-de-France launched its platform Reinforcement-Covid to put those who could help in contact with establishments in need of personnel. Then the system was nationalized from October, with a new site HR Support Crisis. Some caregivers who had not practiced for many years found it somewhat difficult to become fully operational again. When she felt that her place was alongside the sick, Isabelle, a former nurse, had not practiced for 30 years: “ I was released into the wild, I had to whip, she remembers, the last time I had exercised everything was different, there was no computer at all“. If she remembers “having run non-stop», She does not regret anything:«it’s a passion job, not food“. For this third round, she was even ready to go to Mayotte: “I got a text, I said yes, but they didn’t call me back“.

Read also :The French hospital sick with its bureaucracy

The weeks and months to come will therefore be decisive in putting an end to the pandemic. Great Britain, much further along in the vaccination campaign, announces a sharp drop in the number of deaths every day. In an attempt to catch up, the government signed a decree on Friday March 26 allowing students to vaccinate in turn. The Minister of Health also announced that nurses will be able to prescribe the vaccine. In the meantime, seniors who have received their two doses are getting back to their former life, and not only in the health sector. After long months of absence, the resumption of their associative commitments is more essential than ever.