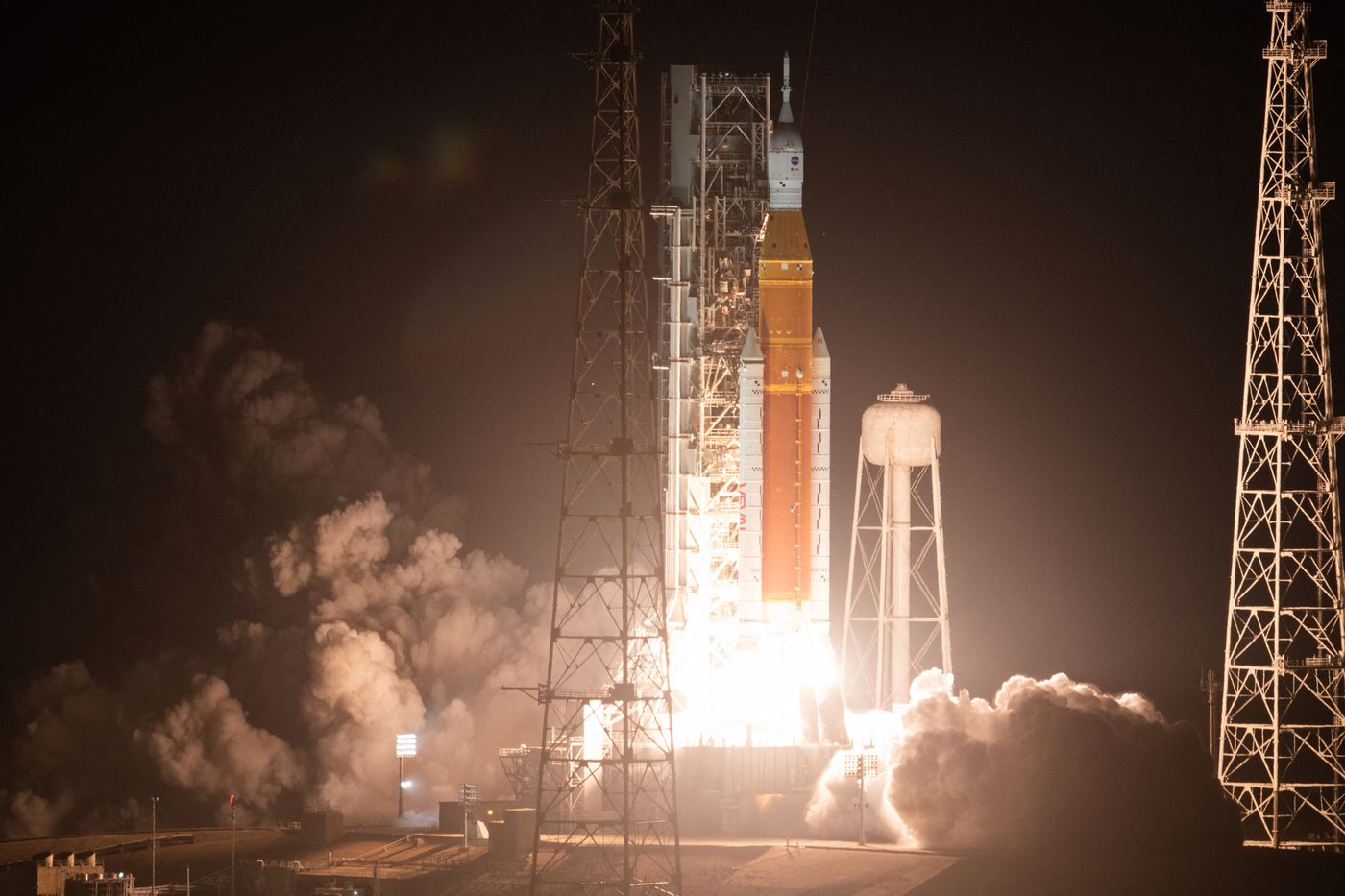 Less than a week after being hit by a hurricane, NASA’s 98-meter SLS rocket took off on Wednesday, November 16 from Kennedy Space Center, Florida. In a deafening din, the Artemis 1 mission took the direction of the Moon, where it should arrive in orbit in several days.

For the first time, the @NASA_SLS rocket and @NASA_Orion fly together. #Artemis I begin a new chapter in human lunar exploration. pic.twitter.com/vmC64Qgft9

This time again, the takeoff experienced slight setbacks, with a hydrogen leak which mobilized emergency technicians. Hydrogen leaks in the tanks had already caused several postponements of take-off, initially scheduled for the end of the summer. Then Hurricane Ian forced the rocket to be garaged, and finally Hurricane Nicole this weekend slammed into the rocket left outside.

Time to take stock and some repairs, and the mission set off in the night in a deluge of fire at 01:47 a.m. local time (7:47 a.m. in Paris). Despite a night launch, some 100,000 people were expected to admire the show, especially from the surrounding beaches. While many other crucial steps remain to be completed in the weeks to come, this take-off is already a real success for NASA.

Advanced base to Mars

Fifty years after the last Apollo mission, this test flight, which will circumnavigate the Moon without landing there and without an astronaut on board, should confirm that the vehicle is safe for a future crew. To measure what future astronauts will suffer, mannequins fitted with sensors have been embarked on board the Orion capsule.

This flight marks the great start of the Artemis program, which aims to send the first woman and the first person of color to the Moon on the occasion of the Artemis 3 mission, around 2026 at the earliest. The goal is to establish a lasting human presence there, in preparation for a trip to Mars. “A lot of sweat and tears went into that rocket”NASA boss Bill Nelson said on Tuesday. “It will allow us to travel back and forth to the Moon and beyond for decades to come. »

Two minutes after takeoff, the two boosters, which were used to pull the rocket out of gravity, fell back into the Atlantic. After eight minutes, the main stage in turn detached. Then, the solar panels that will power the Orion capsule were deployed.

The living space of future astronauts, this capsule embodies European participation in lunar missions. Europe provides the service modules, that is to say the elements which ensure the propulsion of the vessel, the supply of electricity, water and oxygen. About an hour and a half after liftoff, a final push from the upper stage will put this spacecraft on its way to the Moon, which it will reach in a few days.

Orion will remain in orbit for about a week, and will venture up to 64,000 km behind the Moon – a record for a habitable capsule. Finally, the ship must return to Earth, with the test of an ultimate critical point: its heat shield, the largest ever built. This shield will have to withstand a temperature half as high as the surface of the Sun when passing through the atmosphere. The landing in the Pacific Ocean is scheduled for December 11 and the teams will take the opportunity to rehearse an astronaut recovery mission, by picking up the dummies.