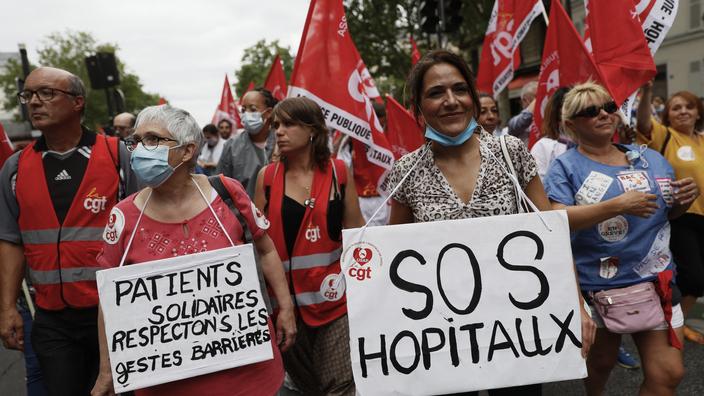 In Paris, a few thousand people marched near the Ministry of Health.

“Emergency for the public hospital“. Trade unions, associations, collectives, political parties … More than 70 organizations had launched a call for mobilization this Saturday throughout France in defense of the public hospital. In Paris, a few thousand people – 6,000 according to a union source, 2,100 according to the police headquarters – marched near the Ministry of Health (7th arrondissement). Demonstrations also took place in Marseille, Lille or Grenoble.

Read alsoCovid-19: should we fear a saturation of hospitals?

Closure of beds, lack of staff, restructuring … The signatories of this call for mobilization, including the CGT Santé et Action Sociale and Sud Santé Social unions, as well as the Inter-Urgences collective, are calling for more resources for ‘public hospital, which’disintegratesThey write. Concretely, they demand “An emergency plan for the public hospital” : salary increase and improvement of staff working conditions, training plan, reopening of beds … On the remuneration side, they are notably asking for the extension of the increase of 183 euros, decided during the Health Segur, to all medical and paramedical professions.

Asked about this mobilization of caregivers on Saturday morning on Franceinfo, the Minister of Transformation and Public Service Amélie de Montchalin recalled that the government had already taken measures, in particular the revaluation of salaries, to the tune of 10 billion euros. “I didn’t say that was enough”, she said, also citing the investment of 19 billion euros of the State in health establishments.

A day of strike on December 7

This day of demonstration was however only a first step. The South Social Health federation more generally calls for a strike from December 4 to 10. While other organizations don’t go this far, many plan to join this call for December 7 only. This is particularly the case with FO Action Sociale and CGT Santé et Action Sociale. On the other hand, the inter-union will not be united. The CFDT in particular will not participate in this movement.

Read alsoDespite the billions of “Ségur”, the hospital is coming out of the pandemic very fragile

The premium of 183 euros from the Ségur de la santé was initially granted only to professionals in hospitals and nursing homes, which had “created a form of misunderstanding“, As Sophie Cluzel, Secretary of State for People with Disabilities underlined. This amount had therefore been gradually extended to other sectors, without however covering all medical and paramedical professionals.