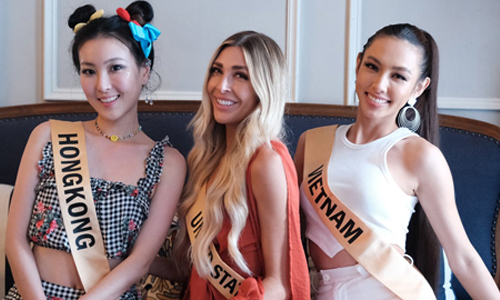 The Miss Grand 2021 contest is taking place in Thailand, bringing together more than 61 beauties from many countries and regions. Sen Yang was one of the contestants who attracted the most attention in the early days because of his sense of humor. During last week’s midweek sash reception, she had a different name and country chant. Yang purposely howled when he said “Hong” and lowered his voice when pronouncing the word “Kong” on stage, making everyone laugh.

While most contestants take care of their clothes, Sen Yang often wears comfortable clothes. At the livestream on November 23, she wore shorts, a T-shirt and did not do hair or makeup. Yang often chooses plastic accessories, stones with birds, starfish, earrings with flashing lights…

She is often the focus of the contestants’ dancing videos at the contest because of her improvisational and enthusiastic movements. The beauty also showed off her ability to sing without accompaniment in the program. Many viewers joked that Sen Yang looks like a “dusty” tourist who got lost in the beauty pageant.

Although not highly appreciated by beauty experts before the contest, Sen Yang gradually won the hearts of the organizers and the audience. Many people commented that the Hong Kong representative has a smart way to attract attention and create sympathy. Audiences in many countries, including Vietnam, set up fan groups on social networks, attracting thousands of members, calling her “comedian”. She is also appreciated for her education, singing ability, modeling experience, foreign languages ​​and social projects.

Sen Yang, 26 years old, 1.7 m tall and has three measurements of 84-58-89 cm respectively. She studied Equality and Human Rights at the University of Glasgow (UK). Here, Yang also completed a course in choral singing. Returning to the country, the beauty modeled and participated in many projects for the community.

Miss International Peace is an annual beauty contest held for the first time in 2013. The winner will travel to many countries to spread the message of “end war and violence”. From now until the end of November, the contestants will move to a number of provinces in Thailand to visit and perform the oral exam, the national costume… Two important contest nights, the semi-finals and the final show. out in Bangkok in early December. On the evening of December 4, the reigning Miss America Abena Appiah will hand over the crown to the winning candidate.