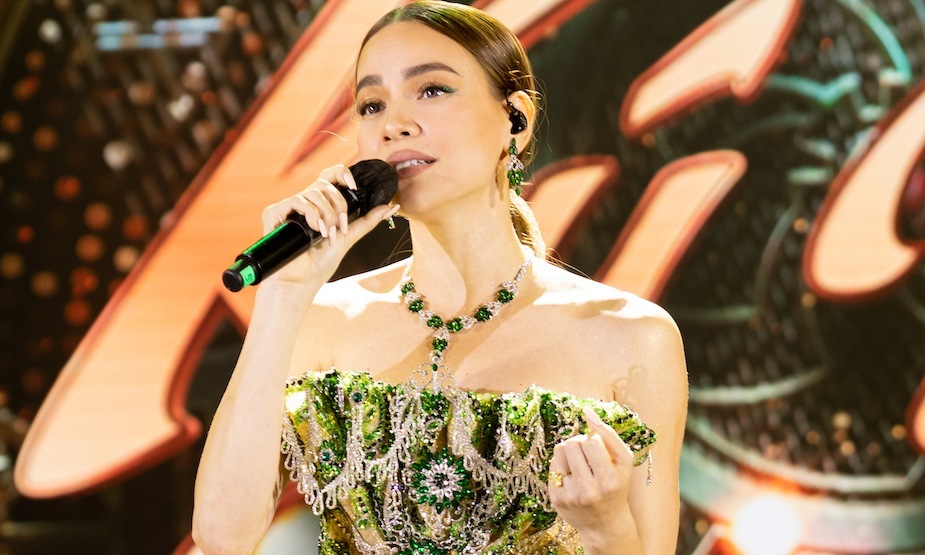 She appeared in the second part of the program to the applause of more than 300 spectators. Ho Ngoc Ha said nervously from backstage even though he has been singing for many years, standing on many stages. The singer likes the feeling of his heart pounding, worrying whether the audience will fill the auditorium or not.

Ho Ngoc Ha reviewed his memories 18 years ago when he released his first album – 24 hours 7 days. Recalling the time when she was still clumsy, she was grateful to receive the help of famous musicians at that time such as Anh Quan, Huy Tuan…

She chose to sing a series of songs that made her name, composed by Duc Tri, including Dreams are just dreams, Night hears the sound of rain, Love is fragile. The singer said, “For me, these songs are always ‘masterpieces’ in my own singing career.” Ho Ngoc Ha said that the emotions in the above songs are real. All were written by Duc Tri while passing her on a motorbike, traveling many places. Songs that have been selected by singers to be included in the project Love songs 1 and 2, bringing her closer to the public.

Ho Ngoc Ha loves to sing about love, cherishing each piece of music, whether it’s happy or sad. The singer said that among the songs that have been released, there are songs that have lifted her spirit while seemingly unable to pass, becoming strong to face all ups and downs. Above all, the songs that follow have a life of their own, often asked by the audience to sing.

Sometimes, she stood still, when she sat down on the stage to perform. Ho Ngoc Ha closes her eyes and relaxes to the tune, piano and saxophone. She clearly shows the alto-mezzo (female mid-bass) voice with a warm, husky timbre, creating a deposition and anxiety in slow tempo songs. At times, her soft breathing in the performances became the highlight, making listeners feel more about the spirit of the song.

Continuing the theme of love, Ho Ngoc Ha sings I owe you (Anh Bang), Shallow sea (Kim Tuan)… The singer also mashups a series of songs written by Nguyen Hong Thuan, including Lonely in the middle of love, Let me go, To my ex… In there, A whole heaven of love (Nguyen Minh Cuong) – the song of a married couple for Ho Ngoc Ha and Kim Ly – was sung along by many audiences.

When communicating, she jokes A whole heaven of love brought me two children – little Lisa and Leon. Below, the singer’s biological parents, husband and relatives laughed along. The content of the ballad is about hope for a bright future, “going together to a place called happiness”, which is different from Ho Ngoc Ha’s previous series of emotional and melancholic songs. In the MV released in 2018, Ho Ngoc Ha and Kim Ly have a romantic kiss scene in the rain.

For more than an hour, she continuously changed how to handle the song. In addition to the low notes about sad love stories and breakups, she brings a joyful atmosphere through What is love (Kien Tran), I’m looking for you (Chau Dang Khoa), Bang Bang (Sony Bono, lyrics by Vietnamese Pham Duy)… When singing Please forgive (Duong Khac Linh) ended the program, she walked down to the audience area. The singer suggested to the audience to stand up, turn on the flash from the phone to tune in. When the performance ended, the audience asked her to sing more.

Although it was late, Ho Ngoc Ha returned to the stage and continued to cover a series of hits from her colleagues such as Words unsaid (Trinh Thang Binh), Don’t be a habit (Duong Khac Linh), Dear lover (Chau Dang Khoa), My sun (Justatee)…

To prepare for the show, Ho Ngoc Ha spent many rehearsals with the band, with the coordination of music director Hoai Sa. She said that she likes to sing live, once standing on the stage, she must sublimate, without errors.

The program also featured Le Hieu and Lan Nha. The two singers show the style of a mature man. Le Hieu brings people back to the past youth Green street (Cheng Nam Son), Our future (Ha Anh), then duet Ho Ngoc Ha, a series of Thai Thinh’s songs, including Deep wounds remain, The day of love fades, The last pain, Tomorrow you go…

Ms. Nguyen Thi Kim Dung (born in 1958, hometown of Thanh Hoa, now living in Hanoi) said: “When I listen to songs about love, I remember when I was a student a lot of dreams, love is not like today’s young people, everything is simple, rustic”. Minh Quan (35 years old) flew from Ho Chi Minh City to Phu Quoc to attend a music night with Ho Ngoc Ha – his favorite singer for the past 15 years. The audience said, “It’s still her on stage with full of emotions when singing about love, but it sounds better.”

Director Long Kan said “Experiential Music Journey” was created with the desire to bring the audience back to the old, appreciate and love life more. He plans to organize the program periodically every month, at tourist destinations. Before that, he did fashion shows – Fashion Voyage – took place in Da Nang, Sa Pa, Ha Long Bay, Phu Quoc.