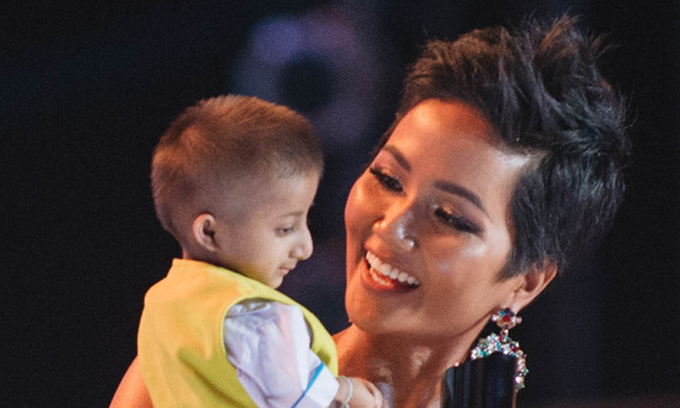 Miss H’Hen Niê posted a photo of her fondling Dinh Van K’Re a year ago and wished the 12-year-old boy to rest.

H’Hen Niê wrote on his personal page on the evening of November 19: “Thank you for letting me meet you and your teacher, even if it’s only for a few minutes on stage. Thank you for your loving heart, I hope you rest in peace. “.

Miss said that despite receiving many awards for her positive, inspirational lifestyle, she found herself inspired by the boy’s story. Dinh Van K’Re (Go Da village, Son Ba commune, Son Ha district, Quang Ngai) has a rare syndrome called Seckel (dwarf person, bird head) since childhood. The strange disease caused the boy to weigh less than 4 kg, 60 cm high. Thanks to meeting Mr. Dang Van Cuong (Principal of Son Ba Primary School) when he was seven years old, K’Ro was raised, cared for and stayed in the school. On the morning of November 9, after four days of being hospitalized with many illnesses, Dinh Van K’Ro did not survive.

H’Hen Niê met Dinh Van K’Re at an award ceremony in 2019. She remembered that as soon as she held the boy on stage, she was touched and impressed by his efforts to overcome illness. “Although life is too short, I have been able to transmit a lot of positive energy and teach adults how to cherish and love every moment of life,” she said.

H’Hen Niê was born in 1992, from Dak Lak, crowned Miss Universe Vietnam 2017. A year later, she represented Vietnam in the Miss Universe 2018 competition and surprised her when she reached the top 5 final. Beauties often bring the story of overcoming poverty to conquer their dreams as words of encouragement and inspiration to live actively in the community. In 2018, H’Hen Niê was awarded the title “Star for community” of the award Star of the year.