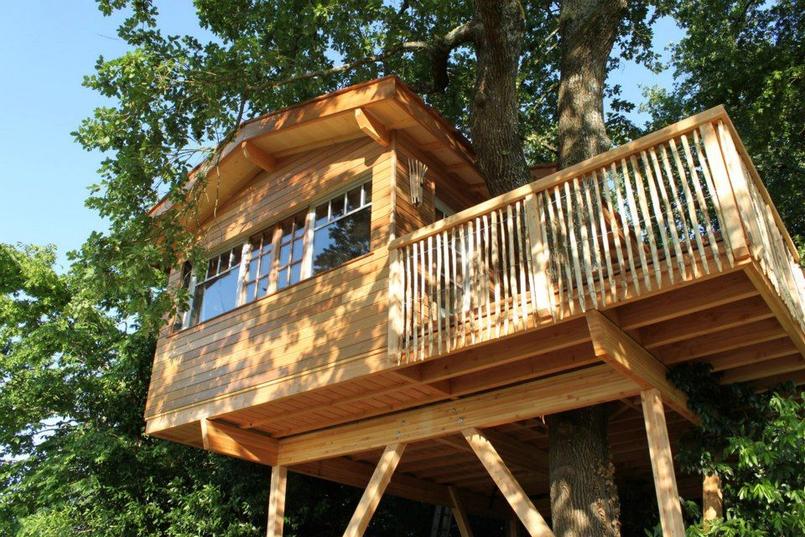 Some French people did not wait for the health crisis to change their life. This is the case of Eric Charmet who lives in Quinsac, a small town of 5,000 inhabitants, about ten kilometers from Bordeaux. Fifteen days before the first confinement, this 50-year-old sold his 2000 m² castle to settle in a 30 m² treehouse.

This specialist in wealth management converted into a winegrower did not have to move very far since this minimalist habitat was on the property that his family had owned since the 18th century. “It was a craftsman carpenter specializing in the construction of wooden houses who gave us the idea of ​​these treehouses. We liked the idea», Says the former squire. For nearly 9 years, Château Lestage offered tourists the opportunity to spend the night in this cabin, perched in a century-old oak tree and dominating a landscape of vineyards.

In February 2020, Eric Charmet therefore decided to sell his 17th century castle that he had bought from his mother about fifteen years ago. The new owners, French industrialists, have planned to organize business seminars to finance the maintenance of the castle. On the 12 hectares of land, they acquired two. The 10 others remain the property of Eric Charmet in addition to the cabin, the construction of which cost him some 60,000 euros. Why this unprecedented change of life? For economic and ecological reasons. “Everything we own has you. The cost of maintaining the estate was too heavy to bear: more than 150,000 euros per year. The exploitation of the vines was not enough, explains the winegrower. In addition, I promised my family to pass on a way of life to them. She loves nature. “

This is why this lover of the environment – “it’s up to us to adapt to nature and not the other way around“- has the ambition to create an ecosite around his cabin, perched on stilts 5 meters above the ground,”to enhance this property“. The idea is to set up a “farm of the 50s where we develop a mixed culture“. “I would like to have sheep, chickens, ducks, a vegetable garden with vegetables and a tavern», Says Éric Charmet. In short, living in self-sufficiency, like more and more French people, concerned about the quality of their food. A philosophy shared by his daughter Diane who also dreams of living in a cabin. “You have to know how to escape and get back to basics while avoiding overconsumption, while protecting the flora and fauna.», She slipped to her father.

»READ ALSO – The city of Paris is selling this castle from 90,000 euros

This is why Eric Charmet plans to build one or two additional cabins: one for his daughter and, if possible, one for tourists. Because the maintenance of his domain has a cost: 50,000 euros per year. “The department, the region, the town hall and the Chamber of Agriculture support me from a logistical point of view only. I don’t want to be subsidized», Hammers the winegrower. Independent to the tips of their nails.