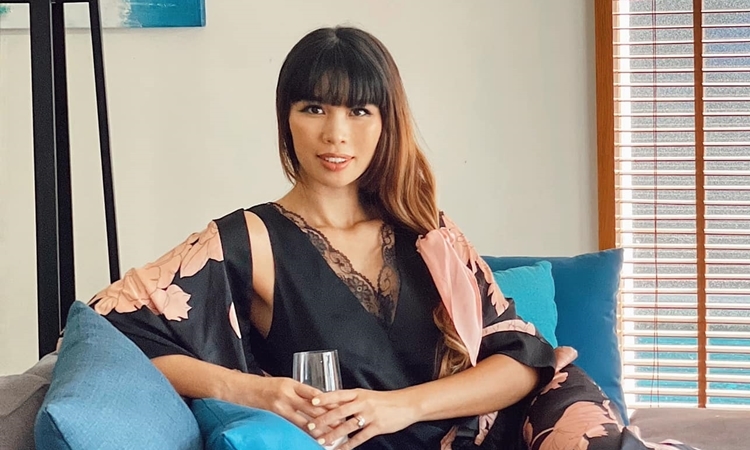 Ho Chi Minh CityHa Anh’s family has just moved into a 170 m2 apartment, located in the city center, after more than three months stuck in Vung Tau because of the epidemic.

The model said she was satisfied with the modern style design of the investor. Therefore, she does not need to build or repair, just buy more furniture. Because Ha Anh’s whole family has been stuck in Vung Tau since the end of June, she had to ask her close friend to supervise the construction and receive the handover for help.

She said: “My friend only had two weeks to move things in, since Ho Chi Minh City eased the distance. Until the whole family was running from Ho Tram to Ho Chi Minh City on October 18, she said it was still not finished. makes my heart flutter.”

Ha Anh and her husband like gray and white, so they choose these two colors as the main color. However, they still flexibly combine other colors such as beige, mint green, pink… to add vitality to the apartment. She hangs family photos in every corner of the house to create a feeling of warmth. The total amount of money she spent on furniture was less than 300 million VND, not including electronics.

At the end of June, Ha Anh’s family rented a separate villa in Ho Tram to celebrate a late birthday for their daughter – baby Myla. Planned to stay here for only four days, they have been stuck until now due to social distancing. When Ba Ria – Vung Tau and Ho Chi Minh City relaxed their health control measures and got permission from the local authorities, they drove home.

Ha Anh was born in 1982 in Hanoi. She and Oliver Dowden (British, commonly known as Olly) married in July 2016. Her husband was born in 1984 and is currently a primary school teacher in an international school in Ho Chi Minh City. The couple had their first daughter in June 2018, named Myla.