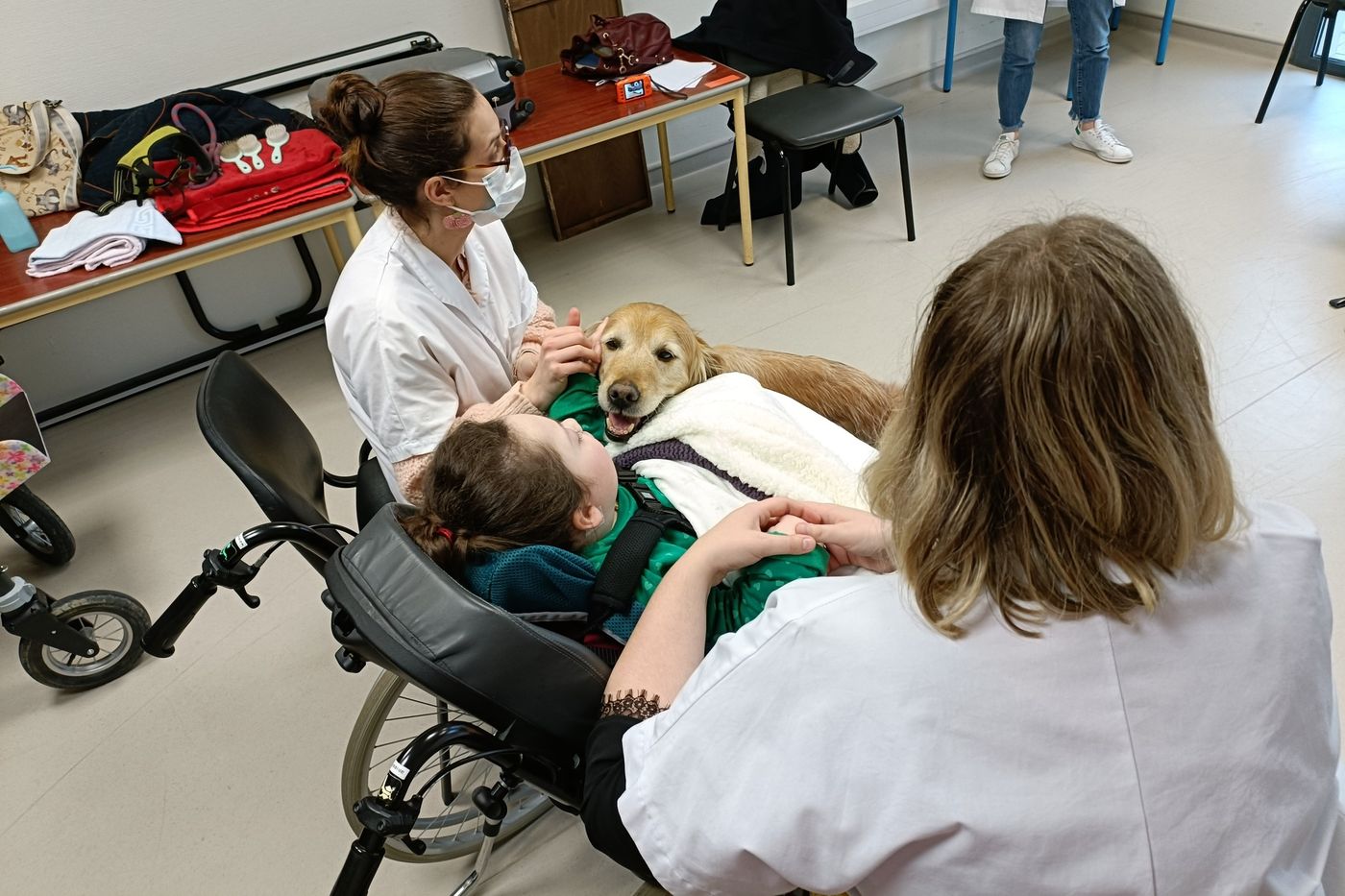 Her eyelids open slowly and her little hands come out of the blanket they were wrapped in. From the top of her wheelchair, Daphne, 4, immediately noticed the presence of the dog Heaven, who came to lick her hands to greet her. For an hour, three little girls hospitalized for the long term at the Capucins rehabilitation center in Angers will be treated to the hugs and reassuring warmth of this golden retriever with long beige hairs, under the watchful eye of Lucile Civel.

Since the 18th century in England

Founder of the professional group “Muzzles for Evils”, this 33-year-old medico-social graduate and her dog intervene on site every fortnight to soothe these children suffering from a multiple disability from birth or acquired (1). “For them, it’s a bubble of well-being in a daily life punctuated by treatments and very heavy rehabilitation, she describes. And casually, to brush the dog, we mobilize the hand and the arm. »

For about ten years, in France, animal mediation has been established in the health and social world. From retirement homes to the disability sector, through child protection or prisons, these animals bring well-being, better self-esteem and promote relationships.

The first experiences of care practices through animal contact date back to the 18th century in England, Laurence Paoli tells us in a book published in January 2022 (2). In 1792, the philanthropist and humanist William Tuke, terrified by the state of mental asylums, decided to found a model institution where patients took care of animals to find pleasure in concentrating on a task. Then, during the first half of the 20th century, a military hospital in New York welcomed dogs to boost the morale of wounded soldiers.

This activity really developed from the 1960s. At that time, still in the United States, the psychiatrist Boris Mayer Levinson published his experience with a young 7-year-old patient, who stopped withdrawing into himself thanks to in the presence of his dog, exceptionally present in the office. This doctor corresponded with the French veterinarian Ange Condoret, who worked in a crèche and had also observed that children (with or without disorders) flourished more in the presence of animals.

Heaven, mediation dog is with Ludivine, 10 years old, in the arms of her educator, under the watchful eye of Lucile Civel. / Florence Pagneux

In the 1970s, a new field of research, called “Human Animal Interactions”, emerged to give a scientific basis to the benefits of animal presence on humans. “There is no global study proving the effectiveness of animal mediation, because it is very difficult to conduct classic research protocols with double-blind populations as is done for drugs”, says Boris Albrecht, director of the Adrienne and Pierre Sommer Foundation, a key player in the sector, which supports scientific research in this field.

Each study will therefore deal with one aspect in particular. A Japanese team was able to observe in 2008 that humans who look dogs in the eye benefit from increased production of oxytocin (“happiness” hormone), as in animals. An Australian team, led by Maggie O’Haire, was interested in the effect of the presence of guinea pigs in a class mixing children without any particular disorder and others with autism. She concluded that the latter had stronger interactions with those around them. They also showed more positive behaviors such as laughing or smiling.

Look in the eyes

In France, Marine Grandgeorge, teacher-researcher in ethology at the Ethos laboratory at Rennes 1 University, has been working on this theme for fifteen years. “We have to be innovative in our research methods, explains the one who did her thesis on children with autism and pets. As we cannot make large cohorts, we must multiply the studies where we would do one or two with a classic protocol.»

→ INVESTIGATION. The benefits of animals on psychotic prisoners

The researcher was interested in the mechanism of visual attention, essential to learning and social relations. She noticed, in particular, that children and adolescents with autism looked dogs in the eye, while they only looked at the mouths of humans. “This social skill acquired from animals can be reproduced. The more the child pays visual attention to the dog, the more he will pay attention to the people around him. »

Not a magic wand

Today, animal mediation is beginning to conquer new audiences: nurseries, schools, libraries, the legal world. In the Lot, a dog assists victims during hearings and then court trials. “His presence helps to free the speech of children and adults alike”, emphasizes Boris Albrecht, at the Sommer Foundation. Same observation at the University Hospital of Angers, where the pediatric service can no longer do without the soothing presence of Lucile Civel’s dogs (3). One of them intervenes for 3 hours, twice a week. The animal goes from room to room, according to the needs of the children. “They are able to express their emotions better when he is around, remarks a nursery nurse. When you have to do a lumbar puncture or put in an infusion, his presence helps a lot. »

However, the actors of animal mediation warn against an overly idyllic vision. “This enthusiasm is due to the awareness of the place of animals in our societies and their potential in our lives., decrypts Marine Grandgeorge. But too much enthusiasm can cause serious disappointment. The animal is not a magic wand.» It also evokes cultural limits. “In some African countries, the cat is considered an ally of the devil. And in some currents of Islam, the dog is impure. We don’t necessarily think about it with our Western prism. » The horse, the second pillar of animal mediation, seems to have unanimous support.

The dog, the most used animal

Retirement homes and establishments welcoming people with disabilities use animal mediation the most, according to a study carried out in 2021 by the Adrienne and Pierre Sommer Foundation. Next come prisons and social support structures.

The dog is the animal most often used, ahead of horses and donkeys.

70% of animal mediation actions have been in place for less than 3 years, a sign of growing interest.