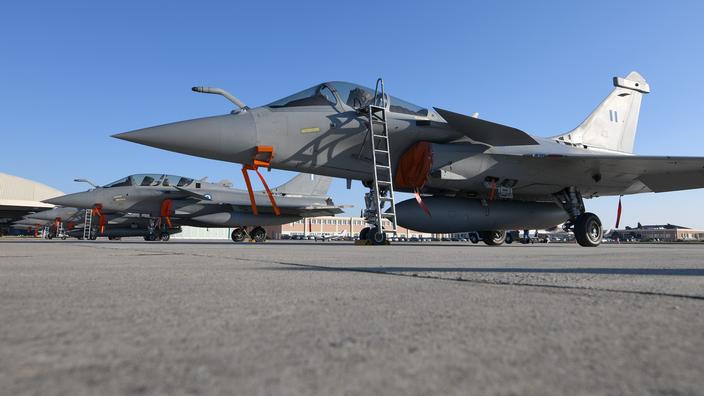 Greece has received its first six Rafales, which landed today at Tanagra air base. Greek Air Force pilots ferried the fighter jets from the site of Dassault Aviation*, their manufacturer, located in Istres, in southeastern France.

Their arrival was greeted by Kyriakos Mitsotakis, the Greek Prime Minister and his Defense Minister, Nikolaos Panagiotopoulos, as well as by Éric Trappier, CEO of Dassault Aviation, during a ceremony organized on site.

This first delivery marks the start of the entry into operational service of the Rafales in the 332 Squadron of the Greek Air Force. ” The mastery with which the Greek Air Force carried out this first convoy brilliantly testifies to the excellence of our cooperation and the solidity of our historical relationship with Greece for more than 45 years. Thanks to our mobilization, we were able to respond in record time to the expectations of the Greek authorities, who today have the Rafale on national territory in order to strengthen the protection and sovereignty of the country. It also attests to the exceptional quality of our aircraft, confirmed by its export successes. Finally, it reflects our total commitment to meet the needs of the HAF and participate in the strategic ambitions of Greece. “, declared Éric Trappier, at the end of the ceremony.

It is true that the agreements between France and Greece have followed a rapid tempo. Four months after announcing its intention to buy Rafales, Athens signed a contract in January 2021 for the delivery of 18 Rafales, including 12 of the latest standard (F3R), taken from the fleet of French forces. , and 6 new combat aircraft. A second contract was signed with the missile manufacturer MBDA, relating to the acquisition of armaments: Scalp cruise missiles, AM39 Exocet anti-ship and Mica anti-aircraft missiles, as well as Meteor long-range air-to-air missiles. And a third contract related to services and training, including a flight simulator, provided by Dassault Aviation and the French Air Force.

A second contract under negotiation

The six Rafales that arrived in Tanagra are therefore the first recently ordered by Greece. The next combat aircraft must be delivered to the Greek Air Force from the end of 2022 with the objective of having deployed the 18 Rafales ordered at the Tanagra air base by the summer of 2023.

Read alsoParis signs the sale of 18 Rafales to Greece

At the same time, Athens is in the process of finalizing the terms of a second contract, relating to the acquisition of 6 additional new Rafales. This, after announcing its intention to buy last September. The contract in due form should be signed in the coming weeks. This will bring to 24 Rafale, the number of French combat aircraft purchased by Greece.

The choice of the Rafale “ sends a clear message in multiple directions“, underlined Nikos Panagiotopoulos, a year ago. Greece’s decision to raise its armament level by buying the Rafale is a warning to Turkey, with whom tensions have persisted since the Turks carried out gas exploration campaigns in the eastern Mediterranean, in waters disputed by Greece and Cyprus. In the summer of 2020, France lent a hand to Greece by deploying two Rafales and two warships on the spot.

Athens acquires, with the Rafale, a multi-mission aircraft which is “combat proven”, that is to say which has proven itself in the theaters of external operations, in particular in Mali in the Sahelo-Saharan strip, in Libya and the Levant. It was in order to meet Greece’s urgent need and ensure its aerial supremacy in the Aegean Sea that France had undertaken to quickly deliver 6 of the 12 Rafales taken from its fleet.
Athens was the first European country and member of NATO to opt for the Rafale. Since then, it has been joined by Croatia, also a member of the Atlantic Alliance since 2009. Last May, Zagreb opted for the Rafale to modernize its combat aviation, by buying 12 second-hand planes, to the F3R standard , to replace its exhausted Russian Mig-21s, which are to be retired from active service in 2024.