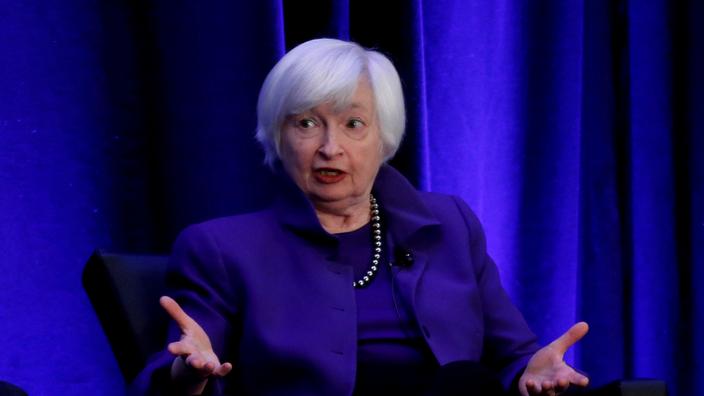 If the United States is inclined to harmonize taxation at the global level, it is because they themselves have planned to make companies pay more to finance their colossal investment plan.

The United States wants to push its international partners to find an agreement on a minimum tax rate for companies, regardless of the country in which they are located, at a time when they themselves want to finance an investment plan by increasing their corporate taxes. “We are working with the G20 countries to agree on a minimum corporate tax rate”Joe Biden’s Economy and Finance Minister Janet Yellen said Monday, April 5, during a speech in Chicago.

Read also :The G20, including China, wants to ease the burden of African debt

The objective: “End this race to the bottom”, to which the countries are engaged, which, to attract companies to their territory and guarantee them a competitive environment, offer companies ever lower tax rates. “Together, we can use minimum global corporate taxation to ensure that the global economy thrives on a more level playing field in the taxation of multinationals.”, assured Janet Yellen.

If the United States is so inclined to harmonize corporate taxation, it is because they themselves have planned to make companies pay more, to finance the ambitious investment plan of 2,000 billion dollars over eight years in transport, industry and Internet networks, presented on March 31 by President Joe Biden. He wants to increase the corporate tax, which would go from 21% to 28%. But the negotiations in Congress promise to be complicated, the measure being far from unanimous. And if a minimum tax rate is adopted internationally, this would prevent the country from being deserted by companies, in favor of more generous neighbors.

We’re talking about a 28% rate that seems fair to everyone. “

The subject should be discussed Wednesday, at a meeting of the G20. The organization hopes to reach an agreement by the meeting of finance ministers and central bankers of member countries on July 9 and 10. “This will be a topic for the G20 on Wednesday at its meeting and so I want to say that taxes are important for development and it is essential that the world does things right”, reacted the President of the World Bank David Malpass, interviewed on the CNBC channel on the eve of the opening of their joint spring meetings with the IMF.

Facing criticism, Joe Biden repeated Monday to reporters that the tax hike should not lead American companies to move abroad. “We are talking about a rate of 28% which seems fair to everyone”, he stressed. He was also offended that the United States counted “51 or 52 groups” among the richest 500 “Who have not paid a single penny of tax for three years”.

Defeating criticisms of the negative consequences for businesses of such legislation, Janet Yellen also felt that it could on the contrary “(stimulate) innovation, growth and prosperity ”. “Competitiveness isn’t all about how US-based companies stack up against other companies in global M&A tenders.”, said the Secretary of the Treasury. Indeed, she continued, “It is about ensuring that governments have stable tax systems that generate sufficient income for essential public investments and to respond to crises, and that government funding is shared equitably among citizens”.

Janet Yellen, during a Senate hearing a few days earlier, had already expressed support for a hike in US corporate taxes as part of a global agreement negotiated at the Organization for Economic Co-operation and Development ( OECD). The draft agreement discussed at the G20 concerns all sectors of activity, but it is particularly acute for digital multinationals, which pay taxes often unrelated to the amount of their profits and have been the big winners in 2020 of the Covid-19 pandemic.