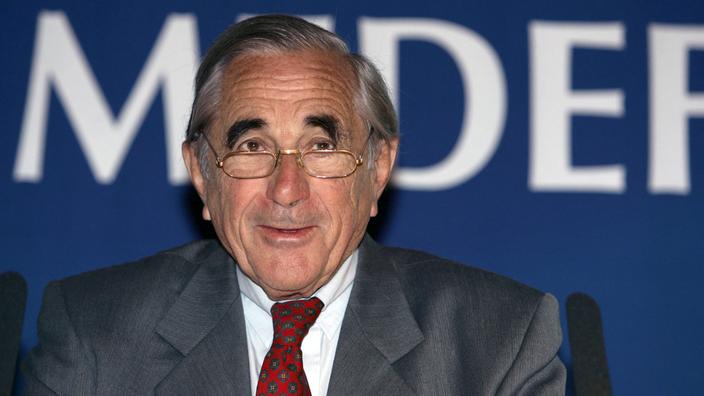 “You must find me a job for the next ten years!” “, he had launched on his 80th birthday to his former secretary general, Denis Zervudacki, who remained very close to the end. François Perigot, who was the last president of the CNPF, from 1986 to 1994, before the transformation of the employers’ organization into Medef, has always had a taste for action with a firm grip. “He had kept his whole head”, admires the ex-right-hand man, now president of the Zerphilia cabinet, who had given him before Christmas his Lovers dictionary of companies and entrepreneurs. Enough to sparkle the eye of the nonagenarian who loved so much this universe to which he devoted his life.

François Perigot died on January 7 at the age of 95. His funeral will be celebrated Wednesday in his parish of Auteuil (Paris 16th) in the presence of his family, but also members of the Parcours Perigot, around thirty business leaders who supported the think tank “Christian wisdom: a stake for the company”, which he animated for ten years, after a request from the Vatican. Highlight of the adventure: this May 17, 2017 when he handed to the Holy Father, accompanied by his executive acolytes, the eponymous book fruit of their work on the managerial process.

Ethics, consensus, discretion, conviction were the keywords in the existence of the former high school student from Bastia who wanted to become a civil servant, but who finally after law and during his studies at Sciences Po found his first job at the Employers’ Federation lace. The collective, already … A military father turned industrialist, a Corsican mother, Catholic and conservative, loving painting and musical comedy, the native Lyonnais also has a taste for the open sea, in every sense of the word. He quickly joined the multinational Unilever, where he became boss of Spain and then of France. He later piloted the Plaster Company.

At the same time, he chaired the Institute of Enterprise and vice-chairman of the Union of Confederations of Industry and Employers of Europe (Unice), of which he would later take the chairmanship. Employers’ unionism and Europe, enough to fill the one who, in 1986, succeeded Yvon Gattaz at the head of the National Council of French employers, the CNPF. Diplomat, discreet, humanist, liberal and European at heart, he poses as a man of the situation during the two mandates entrusted to him. “His action has left a strong imprint on our organization”, greet the Medef, whose president, Geoffroy Roux de Bézieux, is a member of… Parcours Périgot. “A man of commitment, author of a manifesto entitled“ Décrochons les étoiles ”, it was under his leadership that the CNPF became pro-European. “ It was notably on his initiative that the first employers’ summit was launched ahead of the summits of EU heads of state, inspiring the holding of the G7 and G20. Just like the creation of CNPF International, now Medef International, which he chaired from 1997 to 2005, opening up new markets to French companies.

In France, the boss of employers also favored structural reforms in terms of taxation, social protection, commercial legislation, technological investment and education. “He was a pioneer in many areas”, recalls Denis Zervudacki. Deep gaze topped with bushy eyebrows and half-moon glasses, the man, a lover of tennis, golf and horseback riding, was affable and unifying. In particular, he endeavored to calm tensions during the internal struggles which agitated the CNPF. During the cohabitation, he had supported the economic policy of Minister Pierre Bérégovoy in terms of the defense of the franc and the fight against inflation, while criticizing the charges that weighed on companies.

After his departure in 1994, Perigot took over the presidency of Unice, which became Business Europe. And, sitting on the World Commission on the Social Dimension of Globalization, participated in the preparation of the report “A fair globalization: creating opportunities for all”, presented to the International Labor Organization in 2004. The desire to make a contribution to progress, always and everywhere… The tireless business ambassador, who sat on various boards and promoted to the rank of Commander of the Legion of Honor , had also received a number of international medals.