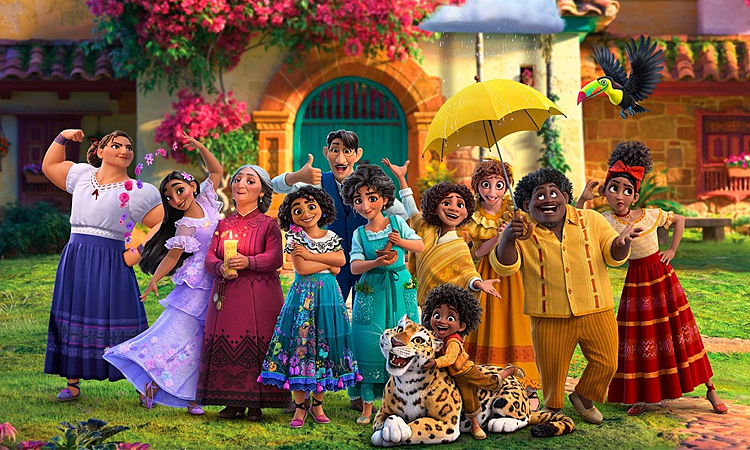 Mirabel is the only member of the Madrigal family without superpowers, always feeling the need to prove herself worthy of the family’s fame.

The work of Walt Disney Animation – won the “Best Animated Film” award at the Golden Globe 2022 – released in Vietnamese cinemas on February 1 (the first day of the Lunar New Year), directed by Jared Bush and Byron Howard, Lin-Manuel Miranda Compose music. The film is inspired by Colombian culture and revolves around a family in the fictional land of Encanto, which means “enchanted” in Spanish.

The Madrigal family were victims of the late 19th century Colombian civil war. After her husband was killed, Alma Madrigal carried her three children, Julieta, Pepa and Bruno to escape the pursuit of the enemy. A miracle happened, causing the candle in Alma’s hand to suddenly glow, driving away the soldiers and saving the lives of four people. The candle also transforms into a large building and grants the three Madrigal children different superpowers.

Fifty years later, the Madrigal family still keeps the magic candle and it continues to help their descendants become more powerful than humans. Mirabel (voiced by Stephanie Beatriz) – Julieta’s youngest daughter – is not so lucky. However, she always thinks positively and cheerfully despite being underestimated by many people around her. One day, an incident occurred that left the Madrigal family devastated. Mirabel follows the trail to find Bruno – an uncle with the ability to see the future who disappeared many years ago – to find the answer to everything.

Encanto is a work suitable for viewers of all ages, with colorful frames, unique music and a humanistic script.

Like many of Disney’s animated projects, the film is aimed at a family audience. The script is bright, gentle, child-friendly, without negative details. The content follows the motif of the main character being abandoned, too different and difficult to get along with relatives. Mirabel tries to show herself to her family, but always gets apathetic, pitiful attitude because she doesn’t have superpowers. However, when things get complicated, the heroine is the only one who can rescue them all from disaster.

The ideological theme praises the power of solidarity, overcoming differences to love and help each other. The work is built around a traditional family, consisting of many generations and living together. Most of the time they get along, but there are still conflicts inside. Family ties are put to the test when members face the risk of losing all their superpowers. On that basis, the film honors good qualities such as independence and resourcefulness of “ordinary member” Mirabel.

The sub-plot focuses on the conflict between Mirabel and her sister Isabela – who can make flowers bloom and is loved by the whole family. The team conveys a message of sympathy, understanding that each person has their own secrets and feelings. The character Isabela is also an example of how people can suffer psychological damage when judged on a single personality trait, whether positive or negative. She was always seen as “the perfect goddess” in the eyes of her family and that became the pressure that made Isabela unable to live up to her desires.

Disney shows curiosity when choosing to exploit Colombian culture. The Madrigal family’s house is designed based on architectural patterns commonly found in the South American country. Animals appearing in the film are mostly endangered species. are preserved here. At the beginning of the film, the director borrowed a historical story about the late 19th century civil war to introduce. This idea is in line with the ideological theme of praising the power of unity that pervades the work.

The music and images are the highlight of the movie. Encanto represents a tropical land filled with flowers and animals. The movie scenes are colorful and eye-catching. Having a large cast of characters, the director succeeds in creating visual accents for each person, matching their personalities and superpowers. Many songs were loved by the audience, became hits. The soundtrack album topped the US market for two weeks. The end song of the movie We Don’t Talk About Bruno climbed to number two on the Billboard Hot 100, the Disney family’s highest achievement of the 21st century.

Minus point of Encanto is a work that is too safe and does not have many climaxes. The lack of villains makes the script less dramatic. The conflicts between Madrigal family members were also not pushed to the climax by the director. The end of the movie follows the usual happy script of the Disney family, not many new points.

The work received positive reviews from the audience and critics, scoring “fresh” 90% on the page Rotten TomatoeS. “Encanto brings a lot of new to the way it is produced and shows respect for Disney’s culture. However, they still end up being a good-looking, family-friendly movie,” Rotten Tomatoes compiled from reviews.The project has also won numerous awards and is expected to be a strong contender. for this year’s Oscars season.