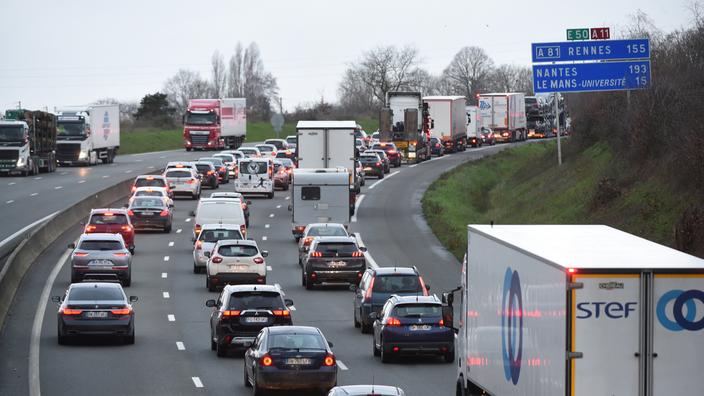 In anticipation of the extended weekend departures, Bison Futé expected difficult traffic on Saturday. The roads could be congested on Monday.

The French can circulate this weekend to reach the place where they will remain confined, Emmanuel Macron said on Wednesday. According to Bison Futé’s forecasts, this possibility has not fallen on deaf ears: traffic was classified orange in the direction of departures on Saturday, as well as for returns on Monday at the national level.

However, the situation was ultimately fairly calm on the roads today. In Île-de-France, traffic jams have never exceeded their usual level, with a peak at 30km around 3pm, far from the 75km observed in normal times at the same time. At 5.45 p.m., only 8 km of traffic jams were recorded on the region’s roads, a level considered low. Likewise, little congestion was noted by Bison Futé around the main agglomerations, such as Bordeaux, Caen, Clermont, Lille, Lyon, Marseille, Montpellier, Nantes and Rennes.

The calm observed on Saturday echoes the situation on Friday. On the eve of the weekend, in Île-de-France, a lower than average level of traffic was observable on the roads. At 5:50 p.m., 142 km of traffic jams were recorded in the region, or half the usual average at the same time (320 km), according to Sytadin, depending on the Direction des routes Île-de-France (DiRIF). At 8 p.m., the number of traffic jams was only ten kilometers, a very low figure.

But many departures were expected for the extended weekend, which marks the start of a new four-week confinement from Saturday evening, across the entire territory. The day of Saturday was classified orange by Bison Futé, that is to say a difficult traffic, in the direction of the departures and “departures from Île-de-France should be numerous in the morning“. , The National Road Information Center advised to leave Île-de-France on Saturday before 9:00 a.m. or after 2:00 p.m.

A very particular cocktail explains the crowds on the roads expected for Saturday: “given the very favorable weather conditions […], the effects of traffic postponements from Friday to Saturday, the concentration of road traffic due to the curfew and the possibilities of interregional trips this weekend, the strengthening of teleworking and the development of the school calendar, the day of Saturday was classified in national orange in the direction of the departures», Warned Bison Futé.

Monday, the situation should become tense, in the direction of the returns this time. The traffic is indeed classified orange, “with expected difficulties in Île-de-France as well as in the western areas and in the Rhône valley“. The organization indicates that it is preferable to return to or cross Île-de-France before 10 a.m., to avoid the A13 motorway between Rouen and Île-de-France from 10 a.m. to 7 p.m., and the A11 motorway. , between Le Mans and Île-de-France, between 3 and 7 p.m. “The return and crossing of Île-de-France will be difficult from mid-morning. The difficulties will increase significantly in the afternoon and will extend to the national level“, Considers Bison Futé.

The government also announced, in a decree published on Saturday in the Official Journal, that heavy goods vehicles may exceptionally circulate on Easter Monday, a public holiday, to deliver businesses or allow removals. The decree mentions “the need to ensure the continuity of the population’s supply chain […] because of the sanitary measures taken to prevent the spread of the virus and to allow removal operations“.