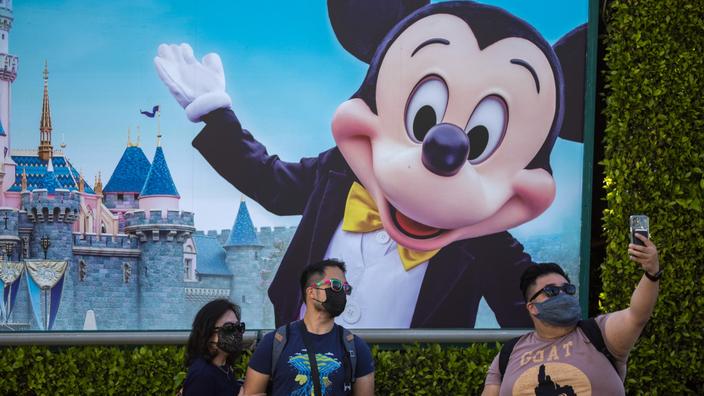 The amusement park was able, again, to welcome visitors this Friday, however maintaining the gauge at 25% of its usual capacity.

“Wow! I have never felt so good! ”, rejoices Momi, Mickey ears on her head, like thousands of other Californians to celebrate Friday morning the reopening to the public of the legendary Disneyland amusement park more than a year after the confinement decreed in the face of the pandemic.

Read also :Disneyland Paris: the reopening still postponed because of the Covid-19

“We were here exactly 415 days ago, March 13, when it closed. And I promised my daughters that we would be back on reopening day. Promise kept “, launches the forty-year-old dynamic at AFP. The Anaheim Amusement Park, south of Los Angeles, is closely associated with episodes in her life: she first came there at the age of ten while still living in Hawaii, there spent his honeymoon and even claims to be “Got pregnant in this park, on an attraction”. Her 17-year-old daughter has been there every year since her birth, “It’s like a family memory”, insists Momi.

The joy of reuniting with Mickey, however, was reserved for visitors residing in California, the only ones allowed at this point under Disney criteria. Groups are also limited to members of no more than three households and all, visitors and employees alike, must be masked. Queues are systematically carried out in the open air.

You still have to have the chance to get a reservation. When the first tickets went online on April 15, the virtual queue reached several hours. And on Friday morning, the park was full for the next seven weeks. The second most visited amusement park in the world behind Disney World in Florida, Disneyland closed as a precaution on March 14 as the coronavirus was just starting to be detected in the United States.

Despite intense pressure from professionals and the many companies revolving around leisure parks, the California authorities did not give Disneyland and its counterparts the green light to resume their activities until April 1. After an outbreak of Covid-19 cases this winter, California has significantly reduced the presence of the virus in recent weeks, thanks in particular to an intense vaccination campaign, and now has the lowest Covid-19 contamination rate per capita the United States.

If its competitor Universal Studio Hollywood reopened on April 15, Disneyland had wanted to take the time to recall more than 10,000 employees placed on technical unemployment since the start of the pandemic and train them in the new health requirements. Carla and Jasmine, two sisters aged 23 and 17, found the time long. Neighbors of Disneyland, they came there almost daily since childhood thanks to an annual pass. “We went there after school, after work, just for a few attractions even if it was for an hour or two”, explains Carla.

What did Jasmine miss the most during these thirteen long months? “No doubt see all the Disney characters and hugs”, she replies. Bad luck for her: despite the health improvement in California, the emblematic characters are no longer kissing for the moment but are held on balconies or platforms allowing the regulatory safety distance to be met.

At Disneyland, the gauge is also limited to 25% of the usual capacity, or just over 20,000 visitors per day according to the estimates of professionals in the sector. Most attractions are operational, according to Disneyland, which took advantage of the closure to renovate some and fit out others in accordance with health recommendations (neutralized seats, plexiglass dividers, etc.).

Some, however, remain closed to the public because they are incompatible with Covid-19, such as the very confined space of the “Nemo’s World” submarine. Momi will be able to find her favorite merry-go-round, taken from the universe of the cartoon “Cars”. “The last time, on closing day, I did 49 laps. My goal is to always beat my record so I will do it at least 50 times ”, she says.