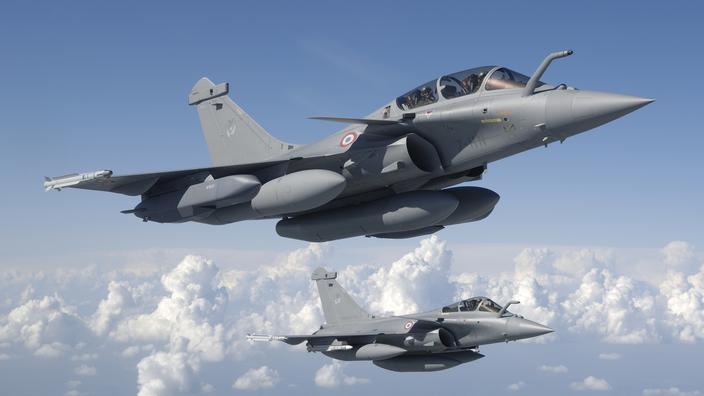 After Greece, Croatia is the second European country, a member of NATO, to choose the French plane.

Florence Parly had anticipated: 2021 will be a great vintage for the Rafale. The Minister of the Armed Forces sees her prediction confirmed over the months, with a new international success for the French combat aircraft: after Egypt, at the beginning of May, which ordered 30 additional Rafale, Croatia made its choice on the flagship of the French forces to modernize its combat aviation. Zagreb specifies that it wants to acquire 12 used Rafale, at the most recent standard (F3R), in order to replace its exhausted Russian Mig-21s, which must be withdrawn from active service in 2024.

Read also :Rafale to change the balance of power in the eastern Mediterranean

The Rafale won the international tender initiated by Zagreb against new American F-16 Vipers, used Israeli F-16s and new Swedish Gripens. “The French offer was the highest bidder for a combat aircraft considered to be one of the best in the world (…). For the best price, Croatia gets the best priced and best equipped aircraft, ”said Croatian Prime Minister Andrej Plenkovic. He believes that the Rafale will be “the basis of our security”. This new success “is also the translation of the operational credibility of the air force and space”, welcomes Florence Parly.

The Zagreb decision also sends a strong political signal, indicating the Croatian desire to anchor itself in defense Europe. This young country, a member of the European Union since 2013, is resolutely playing the European card and strengthening its strategic cooperation with France. After Greece, which ordered 18 Rafale last fall, Croatia becomes the second European country, a member of NATO (since 2009), to join the Rafale club alongside Egypt, Qatar and the United Kingdom. ‘India. “Dassault Aviation and its partners welcome the choice of Croatia, user for the first time of a ‘Dassault aircraft’ and fifth Rafale export customer, and thank the Croatian authorities for their confidence”, reacted the French aircraft manufacturer. It is indeed the first time that a country which had not purchased a Mirage 2000 has become a Rafale customer.

Franco-Croatian cooperation will therefore be strengthened, in particular in its operational aspects and within the framework of projects which could be financed by the European Defense Fund.

The Croatian choice is part of a context of convergence of views between France and Croatia. In particular “A shared interest in the stabilization of the Balkans, in terms of security for Europe, but also in the Mediterranean arc on maritime issues, as well as migration and terrorism”, we explain to the Ministry of the Armed Forces. Franco-Croatian cooperation will therefore be strengthened, in particular in its operational aspects and within the framework of projects which could be financed by the European Defense Fund.

It is now up to the two States to sign the contract in due form. “We are entering the phase of negotiating contractual clauses, which should lead to the signing of the contract, worth around 1 billion euros, at the end of 2021”, specifies the Hôtel de Brienne. During the coming months, Croatia will complete the financing terms of the contract, which represents its largest arms order since the independence war of the 1990s. “The most important ever signed with France”, we insist at the Ministry of the Armed Forces. Croatia is also ordering weapons, in particular Mica air-to-air missiles, supplied by MBDA, and AASM bombs designed by Safran. In addition, there is a training package for pilots and mechanics which will be provided by the Air Force and Dassault Aviation.

The planes intended for the Croatian forces will be taken from the French fleet one year before delivery. This “loss” of operational capacity will be compensated “in a second phase, but beyond 2025, with a new order from Rafale to the new F4 standard, which has just completed a first test flight”, it is pointed out. at Florence Parly’s office.

Once the contract has been signed with Croatia, Rafale’s international order book will accumulate 156 aircraft. But the French fighter does not intend to stop there. Other countries are engaged in upstream discussions or more advanced negotiations. In Europe, Switzerland, which wants to acquire between 30 and 40 combat aircraft, must choose the finalist aircraft at the end of June and designate the winner at the end of 2022. Finland, which has initiated a competitive process for an order of 50 to 64 aircraft, should render its decision at the end of 2021. Other countries could either order additional Rafale, like India (36 planes already acquired), or become customers. This is the case with Indonesia, with which discussions are continuing.

So many promising prospects for the Rafale team, led by Dassault Aviation, with its two major partners, the defense electronics engineer Thales and the engine manufacturer Safran. Not to mention the 400 or so SMEs and mid-cap companies, located across the country, who work for the program, with their 7,000 employees.

* The Dassault Group owns the Figaro.

SEE ALSO – “Connected, ecological, reliable”: this is what the future TGV scheduled for 2024 will look like