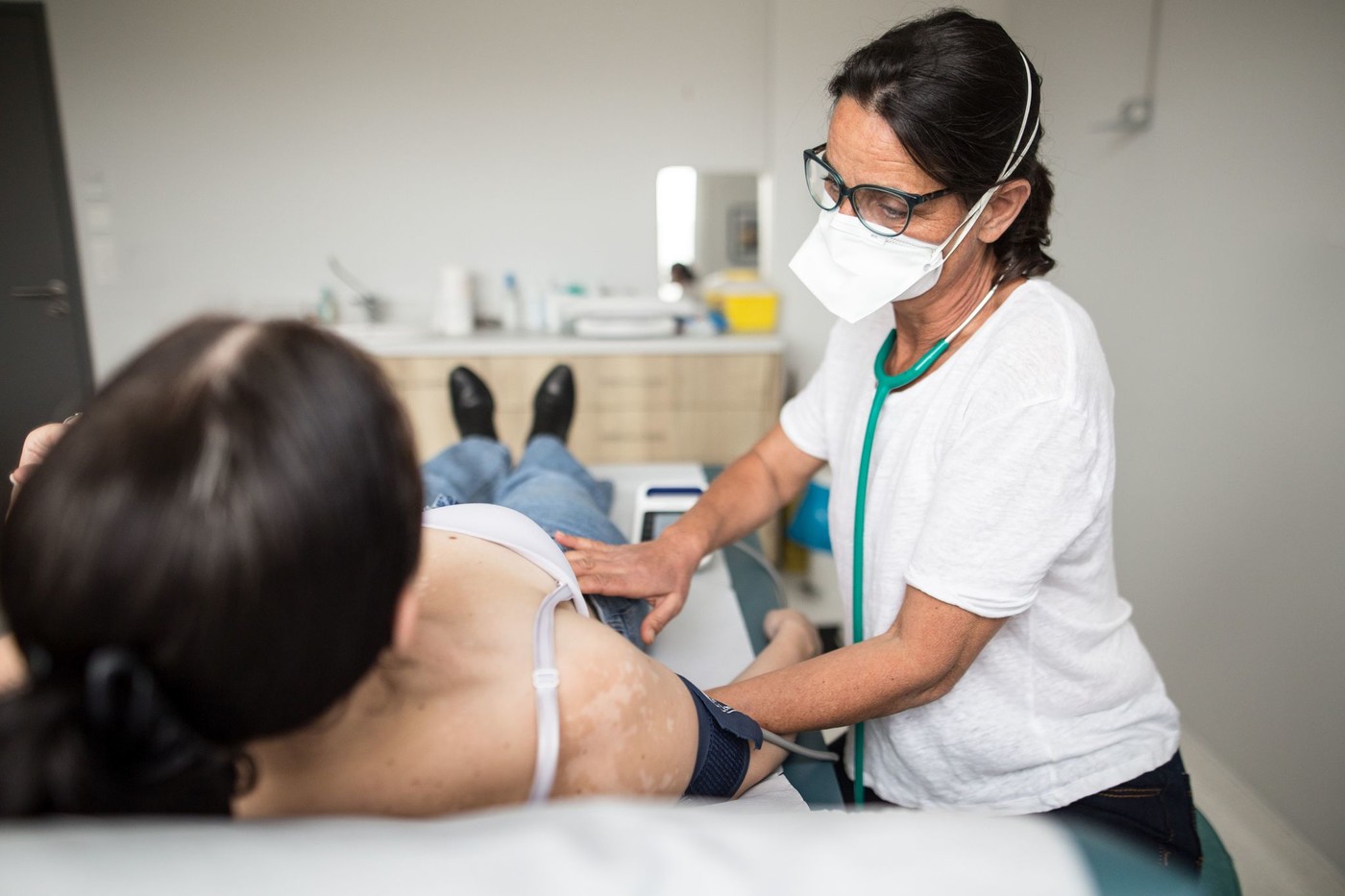 Sitty sighs. The 38-year-old young woman, a liberal nurse in the North Quarters in Marseille, accurately describes these ” Sawtooth “ which now punctuate his daily life: ” I’m fine. And then it falls on me. Suddenly, it’s like I haven’t slept for several days. I have to go to bed, impossible to do otherwise. “

Sitty Ahamada is one of the thousands of French people who contracted Covid-19 in mid-March 2020. On March 30, the nurse returned to the IHU – the Institut hospitalo-universitaire Méditerranée Infection du Pr Raoult -, where she learned about her positivity and where she goes every other day for monitoring consultations. “That day I was negative. And they tell me: it’s good, Madam, it’s not worth coming back ”, remembers this mother of two children.

However, since then, Sitty has experienced an alternation of episodes of deep exhaustion and moments of slightly better. New symptoms appear especially over the months, digestive problems, vomiting, paresthesias (tingling in the extremities) … “There are times when I have motor problems, she continues. My legs are shaking; it is as if the orders were no longer responding. I can’t get up from my bed. There, we say to ourselves: what is happening to me? “ Doppler, thoracic scanner, brain MRI provide no response. So the one who describes herself as “A woman usually very energetic” relishes small victories, such as walking the 400 meters that separate her from her son’s school. She also returned to work on November 2. Part-time.

In his apartment at 13e Marseille district, Adeline turns the pages of a notebook in which she has written everything down. This 54-year-old woman, a former hospital worker and mother of a 12-year-old boy, looks back on the key dates of these months that turned her life upside down. April 13: positive test; April 13: taken over by the IHU; April 19: transfer to the Conception hospital. She returns home at the end of April. Seven months ago. An eternity. Almost another existence. ” I do not recognize myself. I no longer have anything to do with the woman I was, always on the move. Now I take four steps and I am exhausted. What is this life where a mom can’t stand up long enough to bake pancakes for her son? She asks in a voice that breaks.

Every month is a nightmare

Each past month has been like an ordeal for Adeline. His intestines, his liver, his stomach, in turn, malfunction. His blood is clotting badly. His lung capacity is only 70% functioning. And a CT scan just revealed a pericardial detachment (an effusion around the heart). The mother is also sorry that her husband now risks losing his job: “He can no longer go traveling, he has to take care of me …”

Dr Slim Hadiji is a general practitioner in Marseille. Since March, this coordinating doctor of the Health Environment for All association (Sept) has followed around 1,300 cases of the new coronavirus, by participating in the “North Covid” screening and support system. In his patient base, he supervises about twenty people who still show signs “Of this dramatic pathology of which no one understands the consequences”: “I haven’t seen anything like it. These people, I know them. They were out of shape and there they are rags! “ In his doctor’s office, between the towers of the Malpassé district, he describes recurring symptoms: exhaustion, shortness of breath, headaches, pulmonary fibrosis, pericarditis … A certitude : “These patients are still suffering from the pathology. “

“I saw myself dying”

This is what despairs the most Aïcha (1), one of his patients: “I am told that the virus is gone, but I am still sick. ” This 45-year-old mother of Comorian origin is exhausted. Officially diagnosed on March 27, she is still seeing tangible and painful signs of the disease. And then, Aïcha feels weakened psychologically. ” I learned that I was ill on a Friday, the following Tuesday my cousin of 48 years old passed away (Following the Covid, Editor’s note), she blows. I saw myself dying, too. I said to myself, it’s today, it’s tomorrow. “ The pathology results in her by a deep loss of energy: ” I don’t want to go out, to eat, to see people. In the evening, she suffers from anxiety attacks.

While the peak of the second wave has passed in the Bouches-du-Rhône, cases like those of Aïcha, Sitty or Adeline, call for special care. To respond to this, several Marseille healthcare structures are setting up dedicated systems. At the IHU, a monitoring unit will be set up. ” The idea is to bring together a set of skills from Marseille university hospitals », Explains Yanis Roussel, spokesperson for the IHU.

In the coming weeks, ENT, neurologists, cardiologists, radiologists, pulmonologists will build a specific care path there. ” We do not yet have visibility on these persistent syndromes, but whatever the scale of the needs, we must face them. Now that the acute crisis has passed, it is our priority for care », He says.

Pressure from the entourage

Like Aïcha, some patients also find themselves in a manifest psychological vulnerability. “Some show an almost depressive state”, confirms Dr Slim Hadiji. The medical-psychological emergency unit (CUMP) of the Samu des Bouches-du-Rhône has just created support groups for this patient population. ” A place of expression of emotions, of discharge. This also makes it possible, if necessary, to identify worrying situations », Notes Céline Nguyen, nurse of the CUMP.

On the first floor of the Hospital de la Conception, this unit receives, among others, these men and women in whom the effects set in. ” The patient not only does not recognize himself, but sometimes experiences a form of pressure from those around him who want to see him move on. Our role is to support these people so that they allow themselves to verbalize », Continues his colleague, Dominique Lemoine.

Freeing yourself from this weight, relieving yourself of chronic pain, such is Adeline’s wish. In his life, there will be a before and an after Covid, says this Marseillaise. Before asking yourself aloud: ” Will I ever be who I was again? “

Between 10 and 15% of patients would be affected by a long form of Covid, from three weeks after the onset of the disease, according to a study launched by the Patient Community for Research of the Assistance publique des Hôpitaux de Paris (ComPaRe).

About fifty manifestations of the disease were identified through the analysis of the experiences of 600 patients: loss of smell, memory problems, chest tightness, hair loss, bone pain, etc.

A questionnaire will now be developed to try to obtain a valid and reliable measure of the evolution of the “long Covid”. Patients wishing to take part can register on compare.aphp.fr