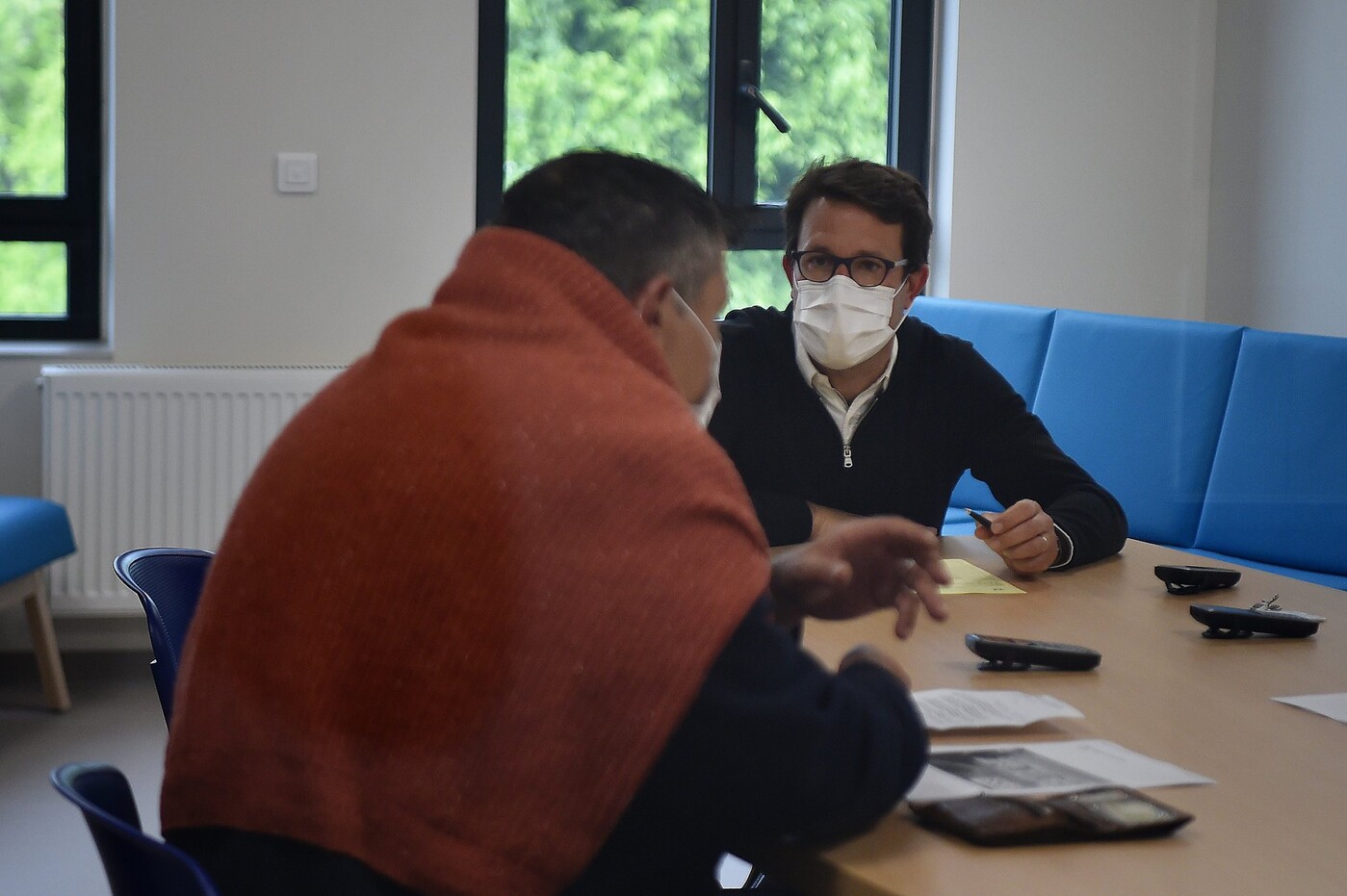 Symbol of the promised acceleration of the vaccination campaign, the Stade de France has opened its doors for the first injections. A showcase for the exploits of the Blues, it joined other enclosures – the Vélodrome in Marseille in mid-March or the Groupama Stadium in Lyon (10,000 bites during the Easter weekend) – in the list of major vaccination centers wanted by the government.

→ EXPLANATION. School at home, hiccups in the avalanche

The objective of the health authorities is to achieve initially 10,000 injections per week in this enclosure of Seine-Saint-Denis, the poorest department in France, hard hit by Covid-19 from the first wave, and where the incidence rate was still close to 800 new cases per 100,000 inhabitants over seven days, according to the latest figures on Friday.

► A campaign to encourage people to “talk” about their psychiatric problems

The government launches a general public campaign to encourage the French to ” talk “ of their psychological state, severely affected by the Covid-19 pandemic, and to recall the existence of help by telephone and Internet, too little known.

“Talking about it is already taking care of yourself”, ensures this campaign, organized by Public Health France and the Ministry of Health, with the idea that detecting psychological and psychiatric problems is “Primordial” to allow “Appropriate care”. The campaign, launched on the Internet and on the radio, will be completed “By a spot broadcast on television” and online video “From April 20”, according to Public Health France.

Its objective is “To promote the identification of the main symptoms of anxiety (irritability, feeling of panic) and depressive (sadness, loss of interest, energy) as well as sleep problems (often associated with anxiety and depression) through scenes of daily life “, details the health agency.

► Nearly 1,000 customers of illegal restaurants fined in Paris for 5 months

According to the Ministry of the Interior, in the capital, “7,345 restaurants have been checked since October 30” and in “This framework, 300 tickets for irregular opening were drawn up and nearly 1,000 customers were fined”.

A lively controversy ignited during the weekend social networks as well as the political class after the broadcast on Friday April 2 of a report by M6 over luxurious dinners in underground restaurants in the capital.

► Collective immunity possible this summer according to the European Commission

None of the 27 member states of the European Union reached the goal of vaccinating 80% of people over 80 at the end of March, but accelerating vaccine deliveries will allow the EU to reach “Collective immunity” facing Covid-19 this summer, the European Commission said on Tuesday.

According to statistics from the European Center for Disease Prevention and Control, covering 23 countries, around 60% of people over 80 had received at least one dose of the anti-Covid vaccine as of April 5, and only 29.7% had received both doses allowing them to be fully vaccinated. According to these figures, 59.8% of French people over 80 have received at least one dose of vaccine to date.

In addition, Member States would be able – on the basis of vaccine deliveries scheduled for the second quarter – to vaccinate between 44% (Czech Republic) and 93% (Malta) of their population by the end of June. The deliveries received until the end of June by France, Italy, Germany, Spain and the Netherlands would enable them to vaccinate between 55% and 65% of their total population, which would more or less represent the level of 70% of the adult population, and therefore the threshold of “Collective immunity” fixed by Brussels.

► In Denmark, the “corona passport” makes its debut to reopen the country

Among the first in Europe, Denmark began to use its “Passport” Covid, the key to a plan to gradually reopen the country by the end of May. For the time being, it allows entry into certain small businesses – hairdressers, beauty salons or even driving schools – by proving that the carrier is either fully vaccinated, or that he has already contracted Covid-19 with a positive test for two to twelve weeks, or it has tested negative for less than 72 hours.

The establishment of this system comes as the European Commission is working to launch a “Green certificate” digital to move freely again in the EU. In the Scandinavian country, the “Coronapass” is currently not used for travel, although the government ultimately intends to. On the other hand, it will be compulsory to access the terraces which are scheduled to reopen on April 21, then in restaurants, museums, theaters and cinemas from May 6.

► New Zealand and Australia will launch their “bubble” where travel freely

New Zealand on Tuesday approved the principle of a “Bubble” with Australia in which nationals of the two countries could travel without quarantine. This should materialize in mid-April.

→ EXPLANATION. Covid-19: the relocation of certain drugs will begin soon

New Zealand, which has recorded only 26 deaths linked to Covid-19, is one of the countries that has been most effective in the face of the pandemic, taking advantage of its geographical isolation. With less than a thousand deaths for a population of 25 million, Australia has also been praised for its handling of the crisis.