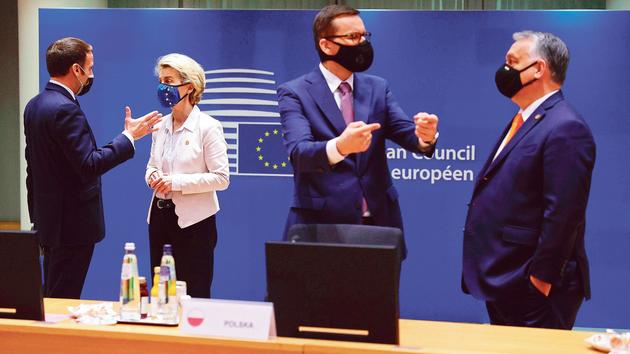 The compromise preserves this package of 1800 billion euros without calling into question the mechanism on the rule of law.

The Twenty-Seven found their smile on Thursday evening. After three weeks of blocking, they finally managed to agree on the post-Brexit recovery plan and European budget. The agreement reached preserves this vertiginous package of 1800 billion euros without calling into question the new mechanism making it possible to suspend payments of European funds to member states violating the rule of law, also called “rule of law conditionality” in the jargon. from Brussels.

Read also :The obstruction of Warsaw and Budapest, symbol of a divide between two Europe

“The historic European recovery plan decided in July is now becoming concrete. We have just adopted a robust agreement on the mechanism to be implemented, while respecting the rule of law. Europe is moving forward, united, and carrying its values ​​”, welcomed Emmanuel Macron. “Now we can start with the implementation and rebuild our economies. Our historic recovery program will advance our green and digital transitions ”, welcomed the President of the European Council, Charles Michel. Of all the EU leaders, Italian Prime Minister Giuseppe Conte is probably the one for whom the relief is the greatest. His country can claim 209 billion euros – loans and subsidies – under the stimulus plan.

Long months of respite for Hungary and Poland

Europeans have come a long way. Since mid-November, they had been suspended at the whim of Hungary and Poland. These two Member States, which are moving further and further away from the principles of the rule of law, feared that the new conditionality would turn into a political trial orchestrated by the Commission. They did not want to hear anything until they were convinced by the compromise proposed by the German presidency of the EU. It was then necessary to convince the countries of northern Europe – the Netherlands in the lead – and the European Parliament that the German solution did not call into question the substance of the rule of law mechanism. which is the case.

The battle is over, we gave a few slaps, we defended our interests

The German compromise provides the leaders of Hungary and Poland with the necessary “clarifications” and some symbolic victories. “The battle is over, we gave a few slaps, we defended our interests”Hungarian Prime Minister Viktor Orban boasted Thursday evening. In their joint declaration, the Twenty-Seven pledge that the link between the rule of law and European funds is applied objectively and only to ensure the appropriate use of Union money, rather than for punish a member state.

Hungary and Poland are also certain of being able to benefit from long months of respite. These countries will indeed have the possibility of lodging an appeal with the Court of Justice of the EU to verify that the rule of law mechanism complies with the treaties and, moreover, have the assurance that no procedure will be launched by the Commission against these countries until the Court delivers its judgment. Which will take a year if the Court really rushes. This will allow Viktor Orban to approach the 2022 elections more calmly. However, as the Dutch Prime Minister, Mark Rutte wished, violations of the rule of law could be sanctioned retroactively from 1 January 2021, even if the formal implementation of the mechanism does not take place until later, in 2022.

The threat of a 25-party deal

Obviously, the Commission is somewhat battered in this matter. This was undoubtedly the price to pay to permanently install the rule of law mechanism, which will now be very difficult to reverse. “In any case, Viktor Orban only trusts two European institutions: the Court of Justice and the European Council», Confides a diplomat.

How did the Twenty-Seven manage to convince Poland and Hungary to reverse their veto? By waving, as France and the Netherlands have done, the prospect of an agreement between 25 on the stimulus plan that would have deprived Poland and Hungary of substantial subsidies, respectively, 23 and 6 billion euros . And by also making these two countries understand everything they had to lose with an emergency European budget for 2021, operating according to the “provisional twelfths” mode, thus suspending cohesion funds. A crucial step has been taken. But we are not yet at the end of the story. The recovery plan is now on the green light from all EU national parliaments.

SEE ALSO – European agreement on the reduction of greenhouse gases: “The European Union lives up to its commitments”, welcomes Macron