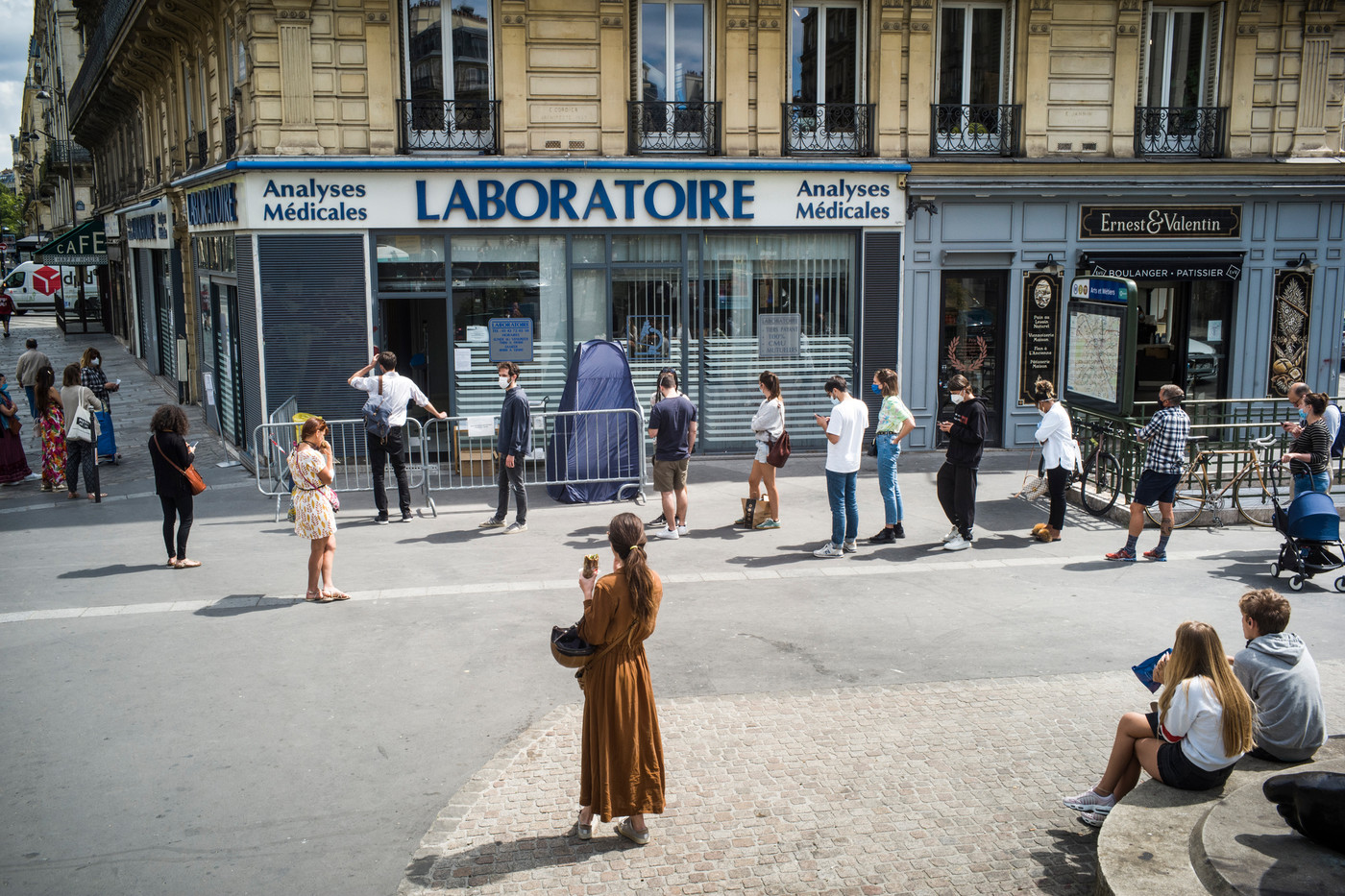 ► What is the current Covid-19 screening strategy?

When it comes to testing, the government’s strategy has changed. After confinement, when the city laboratories were able to equip themselves to carry out RT-PCR tests, the reference method to know if one is positive for Covid-19, the slogan was to massively test the population for avoid a quiet recovery of the epidemic.

But from the start of September, when the signals gradually returned to red, it became obvious that the waiting time to be tested and then to obtain the results was detrimental to the two other parts of the government strategy: tracing contact cases , then isolate them as quickly as possible.

In mid-September, the laboratories were able to distinguish their patients: priority was given to symptomatic people, to those with a prescription, to contact cases – with or without the SMS sent by health insurance -, as well as to staff caregiver.

“Fewer people are being tested today, confirms François Blanchecotte, president of the national union of biologists. For the past two weeks, we have observed a drop of nearly 20% in demand. We went from 1.4 million tests per week to 1.1 million. ” Even testing less, ” we have so many positive cases, he continues. It shows that we can identify the right people. “

However, prioritization of tests alone is not enough to completely resolve embolism. Extremely reliable, the RT-PCR technique indeed requires specific and expensive machines: thus, if 4,000 centers are equipped to carry out nasopharyngeal samples using a swab, they must then be analyzed in specialized laboratories. . There are only 400 in the whole territory.

► Would alternatives make it possible to improve this strategy?

Even if the situation has improved a little on the RT-PCR test front, with shortened deadlines, laboratories are still under too much strain for the “test-trace-isolate” strategy to work properly. The High Authority for Health (HAS) therefore gave the green light, at the end of September and again on Friday, October 9, to the deployment of antigenic tests, under certain conditions.

Where RT-PCR tests look for traces of the virus genome, these antigenic tests simply look for the presence of the virus’s proteins, the antigens. Reliable when positive, these tests have difficulty in detecting low viral loads, and can therefore result in false negatives. The swab works the same way, with a swab in the nose. But the analysis of antigenic tests turns out to be significantly faster, with a strip system similar to that used for pregnancy tests.

These antigenic tests could eventually be available everywhere: in general practitioners, in pharmacies, in occupational health services, etc. ” People tested will be able to leave the pharmacy 30 minutes later with an answer », Welcomes Gilles Bonnefond, president of the Union of trade unions of dispensing pharmacists.

These tests are recommended in two cases: for people showing symptoms of Covid-19 and, above all, for breaking the chains of transmission. In a company, a school or a nursing home for example, if a case of Covid-19 is proven, it will be possible to quickly test close people, even asymptomatic, to trace the contagion.

However, these tests must be carried out within four days at most after the onset of these symptoms, their reliability then no longer being guaranteed. HAS also recommends that for people at risk whose antigenic test is negative, confirmation be carried out by RT-PCR. “Concretely, we recommend taking a sample from each nostril, explains Cédric Carbonneil, head of the HAS professional acts evaluation service. One swab can be dedicated for immediate antigen testing and the other for confirmation by RT-PCR, if necessary. “

► When will these antigen tests be deployed?

“The opinion of the HAS confirms us in the strategy of deployment of the antigenic tests on which we are working”, says one to the cabinet of Olivier Véran. The Minister of Health had promised “ five million antigen tests in early October “. For now, these are still in the trial phase in nursing homes or universities, especially in Île-de-France.

The Swiss Roche and American laboratories Abbott have already positioned themselves to capture the bulk of the market, but impossible for the time being to “Quantify the number of tests that we will need as long as our strategy is not decided”, still tempers the ministry. Several working meetings have taken place in recent days. Around the table, representatives of general practitioners, nurses but also pharmacists.

A priori, these antigenic tests will be reimbursed by social security, as are RT-PCR tests today. These will always remain carried out exclusively by private laboratories, which brake with four irons to carry out in addition antigenic tests. Because antigen testing will not replace RT-PCR testing. ” They will complement the already existing screening offer “, Estimates the government. Once its arbitration on antigenic tests has been made, probably in the coming days, it will be necessary to wait several days or even weeks for these tests to be available to the general public and for practitioners to organize themselves.

The technical gesture, in itself, should not be a problem. “We already vaccinate people, taking a sample and then analyzing it is not more complicated », Assures Philippe Besset, president of the Federation of pharmaceutical unions of France. Pharmacists will carry out antigenic tests in addition to their activity, and in particular influenza vaccines, the campaign of which begins this Tuesday, October 13. “We will have to ensure that people at risk who come to be vaccinated against the flu do not meet in the pharmacy those who are tested for Covid-19”, notes Philippe Besset.

The government on alert

• The 20,000 people tested positive mark at Covid-19 every day in France was crossed, with a peak of nearly 27,000 new cases, Saturday 10. In Île-de-France, “Covid” patients occupy 42% of places in intensive care, leading to deprogramming of surgery for other patients.

• Asked about possible local reconfigurations, “Nothing should be excluded”, replied Jean Castex, Monday 12, on FranceInfo, estimating that France is ” in a strong second wave ”. He wishes to avoid ” by any means »Generalized re-containment.

• A health defense council will be held on Wednesday 14, followed by an interview with Emmanuel Macron, at 7:55 p.m. on TF1 and France 2.

• A new version of StopCovid will be presented on Thursday, October 22. The application has only been installed 2.6 million times since June, or less than one in 20 French people.