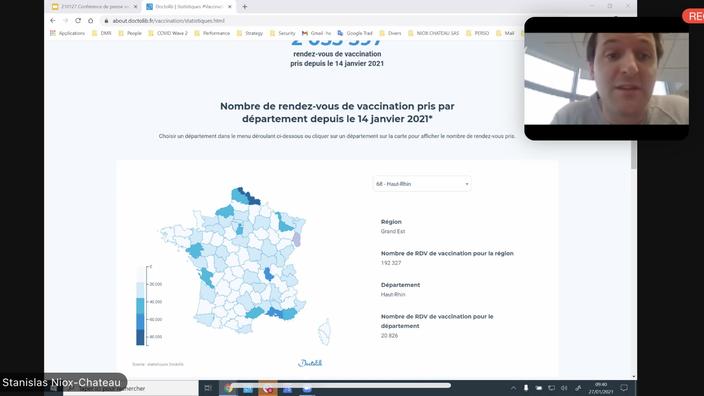 “100% of the second vaccination appointments will be honored”, reassures Stanislas Niox-Chateau, CEO and founder of Doctolib.

Doctolib has come to strengthen the system put in place by the government for making appointments as part of the validation campaign against Covid-19. To date, a little over 2 million people have made an appointment via the Doctolib site. Appointments are allocated by the centers, depending on the number of doses assigned to them. 1,100 vaccination centers are open to date. Far from the alarmist tone of some, Stanislas Niox-Chateau, founder and CEO of Doctolib, draws a positive assessment of the first two weeks of appointment setting.

Each vaccination center has Doctolib management software. French patients have the choice between making an appointment on Doctolib or Sante.fr, or by calling one of the appointments. Since the start of the campaign, 62% of meetings have been online since the start of the campaign, and 38% by phone. The first two days, online uptake rose to 80%. Of the appointments made online, 75% were via Doctolib and 25% via sante.fr. This proportion reflects Doctolib’s footprint. 42 million people use this service for their medical appointments.

No first date in more than four weeks

“100% of second appointments will be honored. The time between the two varies between 26 and 28 days», Reassures Stanislas Niox-Chateau, founder and CEO of Doctolib. On the other hand, the government has given instructions to the centers so that the first injection appointments are not open more than four weeks from today’s date. This makes it possible to adapt the availability to the actual state of the available doses. “As soon as an appointment becomes available, it is taken within a quarter of an hour!“.

To respond to the specificities of the vaccination campaign, a team of 200 people at Doctolib is mobilized, to make developments, to support the centers. “We had to work day and night, seven days a week, to help centers manage appointments», Explains Stanislas … The 1100 centers were equipped in one week. “There are going to be tens of millions of appointments made in the months to come. The general practitioners are also ready, we developed our software for them, because we thought that the vaccination would go through them. There are 50,000 GPs“.

Doctolib is paid by the Ministry of Health, which pays a classic subscription of 129 euros per practitioner and per month. Sometimes there are one or two rooms. “Given the technological investment and the mobilized teams, we are not doing this for the money. For once, we have French technology that works …», Adds Stanislas Niox-Chateau. Half-word, he confesses that this campaign is costing Doctolib dearly. The start-up does not cover its costs … “Doctolib has deployed its solutions free of charge for first aid workers, offered remote consultations during the first confinement … We can’t wait for this crisis to end!“, Jokes Stanislas Niox-Chateau, who also recalls his attachment to the protection of patient data, another costly element.