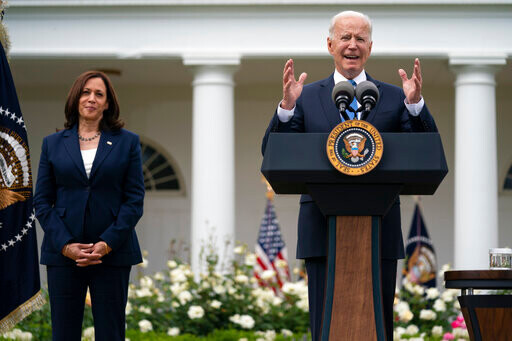 ► In the United States, put off the masks!

Americans vaccinated against Covid-19 can say goodbye to one of the symbols of the pandemic: for them, the health authorities on Thursday lifted their recommendation to wear a mask, a ” big day “ according to Joe Biden. “If you are fully vaccinated, you no longer need to wear a mask! “, rejoiced the American president from the gardens of the White House.

→ READ. Covid-19: the United States in favor of the lifting of patents on vaccines

Currently, about 35% of the US population, or over 117 million people, is fully vaccinated, that is, they have received either the single dose of the Johnson & Johnson vaccine or both doses of the vaccine. vaccines from Moderna or Pfizer / BioNTech. The only exception: the health authorities always recommend that vaccinated people wear a mask in transport (planes, buses, trains, etc.), in airports and train stations.

► Lifting of restrictions in Europe

Italy on Friday announced the end of the five-day mini-quarantine imposed so far on travelers from European Union countries. This measure will come into effect from Sunday. Italy relies heavily on foreign tourists to boost its economy, while the tourism sector accounts for around 13% of its GDP.

In Greece, all traffic restrictions are also lifted, after seven months of confinement, to launch the tourist season. The ban on leaving your department or going to an island without being a resident, exit authorizations by SMS and police checks are now lifted. The only condition now to travel to Greece: to be vaccinated or to present a negative Covid test.

→ PRACTICAL. Covid-19: can we get vaccinated at our vacation spot?

Portugal allows for the arrival of British tourists in the country, after the lifting of the restrictions put in place at the beginning of January to control the explosion of the pandemic at the beginning of the year. This decision comes after that of the United Kingdom, which had placed Portugal on the “Green list” countries where its nationals can go without having to observe a quarantine on their return.

► France extends its quarantine to enter the territory

Travelers from four additional countries, including Colombia, will have to observe from Sunday May 16 a mandatory ten-day quarantine on arrival in France, due to the circulation of the coronavirus epidemic in these countries, announced Matignon this Friday, May 14. This restriction will also apply to Bahrain, at Costa Rica and to Uruguay. Twelve countries were already subject to such restrictions, including Brazil, India, South Africa, Argentina and Turkey.

As for travelers returning from other high-risk countries, the police may unexpectedly check their presence at their quarantine location and impose a fine of € 1,000 to € 1,500 on offenders.

► Give up vaccination for children?

The WHO boss on Friday called on countries to give up vaccinating children and adolescents against Covid and donate the doses thus released to the Covax system, to redistribute them to underprivileged countries. Tedros Adhanom Ghebreyesus stressed that as things are going, the second year of the pandemic would be “Much more deadly” than the first, during a press briefing.

→ READ. Vaccination: how to benefit from a remaining dose?

For months, he has denounced vaccine nationalism which, given the shortage of available doses, deprives many countries of being able to protect the most vulnerable people and healthcare workers, when the European Union or the United States promise to vaccinate a vast majority of their population by the summer.

► The extended state of emergency in Japan

Japan has extended its state of emergency, which already concerned six departments including that of Tokyo, to three additional departments in the face of the resurgence of the pandemic, just ten weeks before the opening of the Olympic Games in the Japanese capital. The state of emergency mainly consists in restricting the activity of certain physical businesses, in particular imposing the temporary closure of bars and restaurants serving alcohol.

At the same time, anti-Olympics activists submitted a petition calling for the cancellation of the Games due to the deteriorating health situation. More than 357,000 people have already signed it. At the origin of this initiative, Kenji Utsunomiya, lawyer and former candidate for the post of governor of Tokyo, affirmed that the polls carried out since last year show that 60 to 70% of the population are opposed to the holding of the Games this summer.

Faced with the urgency and the challenges, the United Kingdom is announcing its intention to organize the COP26 climate conference face-to-face in November in Glasgow despite the pandemic. Initially scheduled for November 2020, this summit, which will bring together leaders from 196 countries, companies and experts, had already been postponed last year due to Covid-19.

The modalities of its holding – face-to-face or online – were debated recently, as the United Kingdom is gradually emerging from the health crisis, which is far from being the case in all countries. “I have always defended the need for a face-to-face COP (…). We will make sure that the safety of the delegates will be paramount ”, decided the president of the conference Alok Sharma, appointed by the British government, promising “To explore all possible security measures”.