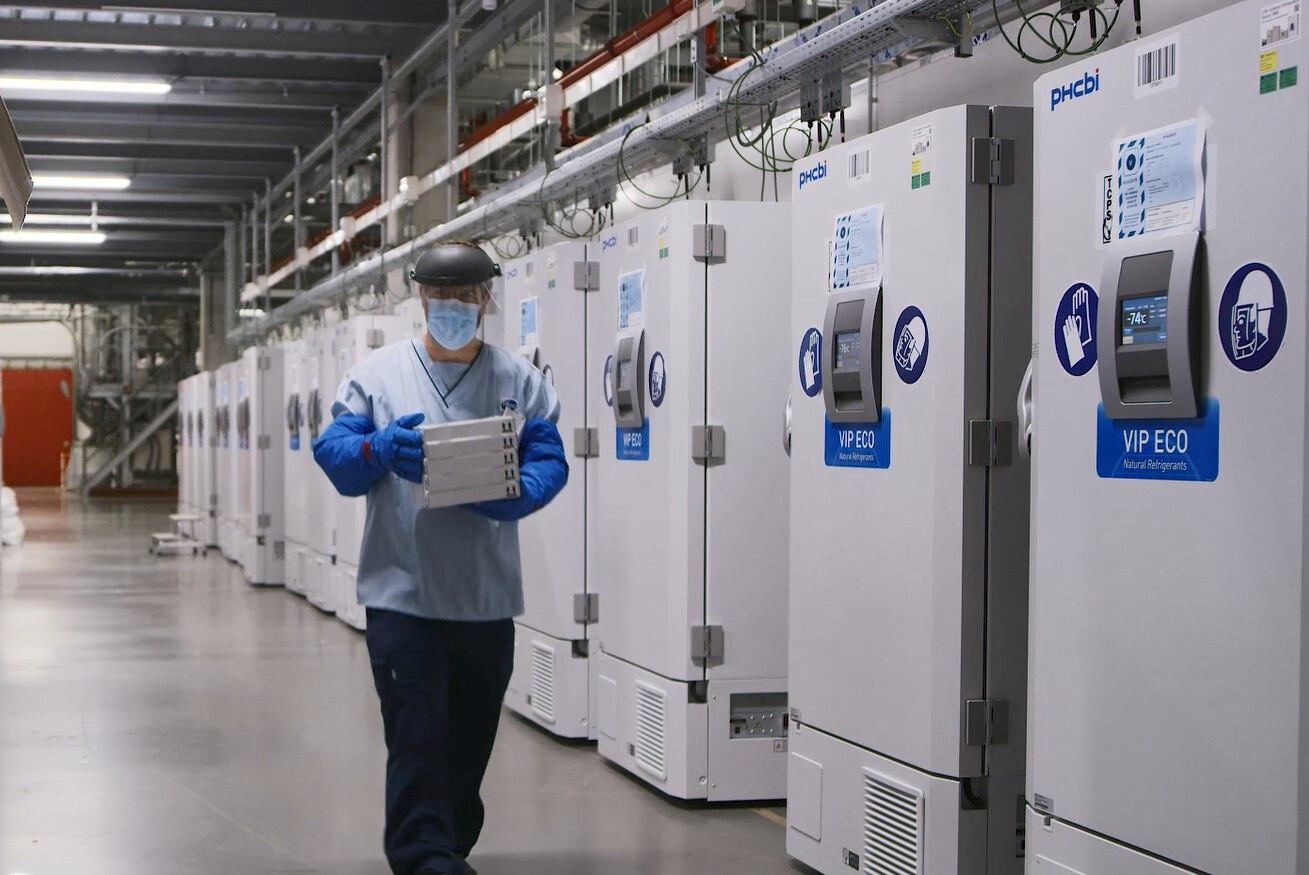 Until the start of the Covid-19 vaccine race, Puurs was best known for its white asparagus crops and its lager brewery. The enormous drug production plant, located on the outskirts of this Belgian town of 17,000 inhabitants, on the edge of a fast lane, had probably never imagined one day finding itself in the center of international attention.

→ READ. Covid-19: should you get tested before Christmas?

And yet, the 3,000 employees manufacture 400 million doses of vaccines and injectable drugs there each year. Puurs has long been the largest production site for pharmaceutical giant Pfizer in Europe. The second in the world. This is where new production lines have been set up this summer. 150 people have been hired to manufacture the doses of Covid-19 vaccines promised to the European Union.

By the end of the year, 50 million of them should leave the Belgian factory and leave Puurs, “the village that will save the world”, as the British media have already dubbed it. France hopes to benefit from part of this first batch, otherwise it will be difficult to keep the schedule that the government has set: start the vaccination campaign, as planned, in early January. The Pfizer group does not give any quantitative forecast on the distribution of its production between countries.

The Belgian factory of Pfizer will concentrate most of the production

The Belgian plant is expected to concentrate most of the production of the new vaccine. But the European Union having chosen to produce the majority of its vaccines on its territory, other sites will then be called upon, including that of BioNTech in Germany and Delpharm in Eure-et Loir, which will only carry out the bottling.

“Brussels has essentially served as a pre-purchase center to secure supply”, underlines the Macronist MEP Véronique Trillet-Lenoir. In all, the European executive has contracted, on behalf of the 27, for the equivalent of nearly 2 billion doses, by signing agreements with six vaccine candidates, including Pfizer.

“The calculation rule for the distribution of the ordered doses will be stupidly the relative size of the populations”, continues Véronique Trillet-Lenoir, doctor and member of the European Parliament’s Health Committee. Regarding the equipment needed for vaccination (syringes, gloves, masks, etc.), the European Commission also launched a joint call for tenders to provide the Twenty-seven on September 28. And Olivier Véran assured that France now has the necessary stocks that will make it possible to constitute the vaccination kits, when the doses arrive on French territory.

To facilitate this work, the Commission has chosen to lift certain standards that it usually imposes. “It has exceptionally freed the 27 from regulatory constraints, particularly on the packaging and packaging of doses, so that they are ready as quickly as possible”, notes the MEP Nathalie Colin-Oesterlé (EPP, right). The user manuals, for example, will be accessible online, in 24 languages, including French and English.

A daily ballet of trucks

The United Kingdom, which has decided to speed up the validation procedure, has already been delivered by the Belgian factory. On December 2, the first trucks loaded with doses of the Covid-19 vaccine left the Puurs plant with the utmost discretion. Direction, Great Britain via the Channel Tunnel.

Since then, the ballet is daily. It will then gain momentum towards all of Europe. As soon as the marketing authorization has been given by the European Medicines Agency, in principle by 29 December next. And that the French authorities will have given the green light, no doubt in the process. Because it is this last opinion which will trigger the delivery in France of the first doses by the Belgian factory. This should be done by road, the French border being just over 120 kilometers away. Air resources cannot be excluded, however.

To believe several logisticians that The cross contacted, it is not yet clear the name of the company or companies that Pfizer will retain for these strategic trips. ” It could also be the French State which launches a public market Slips a good connoisseur of road transport.

Vehicles escorted by the army?

Opacity is also required, this time probably for security reasons, on the organization of convoys. Will we witness a noria of unmarked trucks so as not to attract attention? Or, on the contrary, to vehicles escorted by the police or the army, or even by private security companies? The question will undoubtedly arise for all vaccine deliveries, whether they come from Pfizer or another laboratory.

” This type of decision belongs to the principals, says Stéphane Dupuis, head of large industrial “life sciences” accounts at DHL Express France. Anyway, for months we have set up an operational group to think about and prepare all the possible scenarios according to what the sponsors ask. “

Lose the least amount of time and… the least degree of centigrade possible. Because speed and control of the cold chain will be absolute requirements of these routes between Belgium and France. Transporting products at -70 ° C or -80 ° C, the temperatures required by Pfizer’s vaccine, is nothing new to companies that regularly work in the pharmaceutical supply chain – even though transporting vaccines between 2 and 8 degrees is more usual. Since few vehicles can descend at these extreme temperatures, the convoys from Puurs should look like Russian dolls in a way.

→ MAINTENANCE. Chantal Jouanno: “We must organize a national debate on vaccination”

The small shipping crates designed by Pfizer filled with 1000 vials and dry ice (or dry ice) will themselves be enclosed in special containers containing ice packs, themselves in a refrigerated truck… “ This type of container is of course traceable and equipped with a temperature recorder at all times. », Explains a logistics specialist.

In France, carriers should deliver the doses to 11 intermediate storage platforms equipped with super-freezers. The doses will then take to the road again, heading to city pharmacies and hospital pharmacies which will have to supply nursing homes and long-stay residences for the elderly (around 10,000 establishments).

The start of the countdown

The countdown will then be started. Because the vaccines will be thawed during the journey between warehouses and pharmacies, which should not take more than 12 hours. Therefore, the vaccine can be stored between 2 and 8 degrees – the temperature of a classic fridge – but only for 5 days.

The pharmacies will therefore have 4 hours to prepare or at least check that the vaccination kits (doses, syringes, needles) are complete and deliver them to the establishments. “We have already been asked to make room in the fridges where we keep the drugs”, confirms Ève Guillaume, director of the public nursing home Lumières d’Automne, in Saint-Ouen. There will therefore remain 4 days to vaccinate. After this time, the multidose vials will be discarded.

“Each pharmacy is in the process of putting together a file with the number of nursing homes it supplies, the number of residents and caregivers affected by the vaccination, explains Gilles Bonnefond. From these data, an estimate of the number of doses per establishment will be calculated. “

No vaccination without consent

But it’s impossible to know exactly how many people will be vaccinated without first obtaining their consent. This authorization must be given by the resident, his guardian or by a relative designated as a trusted person. “At the moment, we have not had instructions for formulating this document. But time is running out, the Christmas holidays are approaching. I do not see how we are going to be able to calmly organize the information of families and residents as well as the collection of consent ”, Eve Guillaume alert.

→ READ. Vaccination: how a citizens’ council can reassure the French

Who will vaccinate next? “The administration of the Pfizer vaccine, being a new product, can only be done by a doctor or a nurse provided that a doctor is present”, explains Jean-Paul Ortiz, the president of the Confederation of French medical unions. The doctor may intervene for mild and local reactions such as pain at the injection site or more serious, an allergy.

Vaccination can only be done in the presence of a doctor

In nursing homes, this task could fall to the coordinating doctor. “When there is one!” warns the director of the Saint Ouen nursing home. Ours is only there for a day and a half a week, which will probably not be enough to do everything. “” The attending physician who follows the most residents could take charge of the vaccination “, proposes Jacques Battistoni, president of the union of general practitioners. He will then have to come back 20 days later for the second injection, necessary for the vaccine to be effective.

The contact details of the person vaccinated, the source of the vaccine, the batch number… everything will be archived thanks to an information feedback platform, via the health insurance website. “We could take care of this work, pharmacovigilance is one of the things that we know how to do best, pleads Philippe Besset, the president of the federation of pharmaceutical unions. To give the population confidence in this vaccine, it will be necessary to be transparent from start to finish. “