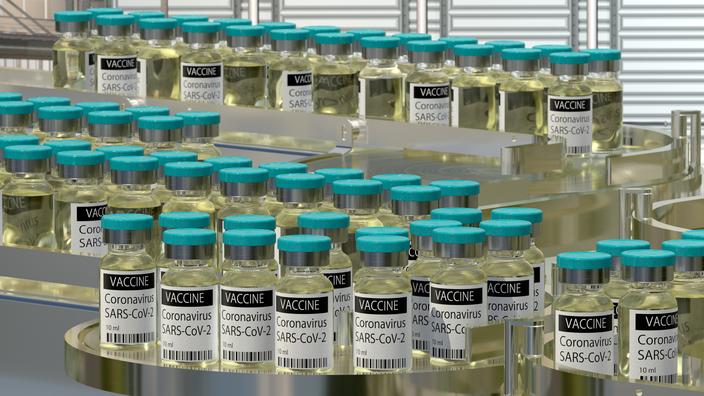 Faced with a third wave, Brussels wants to secure the pre-purchases of doses.

Is it good “ the force awakens As a diplomat likes to believe? While they have so often given the impression of being overwhelmed since the start of the pandemic, Europeans seem ready to show their teeth on delays in vaccine deliveries. “ Europe is not meant to be a useful idiot “, Warned an Elyos adviser on Wednesday morning.

In view of what has happened for two months, the question does arise. While some countries – France, Germany, Netherlands, Belgium, etc. – have hardened in recent days their measures to deal with a third wave, vaccines continue to be sorely lacking on the continent, the countryside is slipping and the discontent continues to mount among citizens.

According to the latest figures available, only 70 million doses have been delivered to Member States, of which 52 million have been administered. The EU, over the past two months, has yet exported 43 million doses to 33 countries, including the United Kingdom (10.9 million doses), Canada (6.6 million), Japan (5.4 million), Mexico (4.4 million). She did not receive a single dose in return. If there was only that.

After a surprise visit by the Italian authorities at the request of Commissioner Thierry Breton, 29 million AstraZeneca doses were also discovered at the end of last week in a factory of the subcontractor Catalent, in Anagni near Rome, where the vaccine is conditioned. This triggered the anger of Europeans before the Anglo-Swedish group explained that 16 million of these doses were intended to be delivered to the EU and that 13 million would go to poor countries via the Covax initiative.

It is in this increasingly tense context and on the eve of a videoconference of the Twenty-Seven which will once again give pride of place to the coordination of the Member States in the face of Covid-19, that the Commission has decided to further lock down and for a month and a half the exports of vaccines outside the EU, even if she prefers to speak of “ an adjustment »Of the transparency and authorization mechanism. A majority of Member States approve this project on which they have two weeks to vote.

In the draft conclusions of their meeting on Thursday, the Twenty-Seven underline “ the importance of transparency as well as the extension of the export authorization regime “. On the other hand, other countries, notably Belgium and the Netherlands, which have numerous factories and pharmaceutical companies on their territory, are concerned about the chain consequences that export bans could have on value chains. “ We are a free trade nation », Recalls a diplomat. “ Let’s not make decisions that would be a lose-lose for everyone He adds.

Concretely, the Commission wants to tighten up shipments of vaccines to third countries that do not play the game of reciprocity and / or to those who benefit from vaccines from the EU when their situation is better than that of the EU. When an export authorization request for vaccines is sent, the two questions to be answered by the national authorities and then the Commission, before giving the green light, will be as follows: “ Does the destination country restrict its own exports of vaccines or raw materials used in their manufacture, either by law or by other means? Are the conditions in the destination country better or worse than those in the EU, in particular with regard to its epidemiological situation, vaccination rate and access to vaccines? “

Could these possible bans target all vaccines, including those produced by Pfizer and Moderna groups that respect their contractual commitments? Brussels, which has set a target of 70% of the adult population vaccinated at the end of the summer, maintains the vagueness. “ I am sure that 50 million doses will not be banned overnight. We are extremely aware of the fragility of value chains and we will act with great caution », Tempers a European official, reminding on purpose that several countries – the United Kingdom, the United States and India – have also locked their exports.

If UK and EU were on good terms, we would work together to see how AstraZeneca can serve both

Unsurprisingly, it is above all AstraZeneca and the United Kingdom that are in the sights. From the start of the pandemic, the Anglo-Swedish group has systematically reduced its deliveries, putting in great difficulty the Member States which had favored its vaccine and are now demanding a new distribution of the doses between them. According to the contracts signed, the pharmaceutical group should have provided 130 million doses at the end of March. It has only delivered 19 million at this point. And, according to the Commission, many of the doses promised to the EU have been reserved for the British. “ If the UK and the EU were on good terms, we would work together to see how AstraZeneca can serve both. But we are in this argument when we have the same interests and the same needs “Regretted Tuesday a European diplomat.

Shortly after the Brussels announcements, British Prime Minister Boris Johnson warned the EU against “ arbitrary blockades “. It must be said that the European turn of the screw is very bad news for London. The United Kingdom has chosen to vaccinate in full swing without “ freeze »The quantities required for the injection of the second dose. While 28.6 million people received the first dose, only 2.5 million received it from them. The threats from the Commission could ultimately bear fruit. London and Brussels announced on Wednesday evening to work on a solution “ mutually beneficial “.