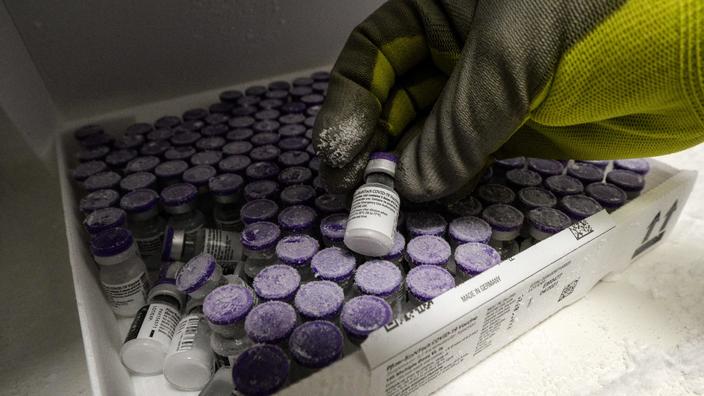 A temporary reduction in deliveries will affect all of Europe, the time for the laboratory to improve its production capacities in Belgium.

The Pfizer vaccine victim of its success? Deliveries to EU countries of planned quantities of Pfizer / BioNTech Covid-19 vaccines will experience delays in the next three to four weeks due to work at the Belgian factory where they are manufactured, said Friday the German Ministry of Health. “The European Commission and, through it, EU Member States have been informed that Pfizer will not be able to fully meet the promised delivery quantities ” explains a press release from the ministry.

Contacted by Le Figaro, the Pfizer laboratory explains “Be in the process of reviewing the planned allocations” vaccine in the various European countries, and has not yet quantified the impact that these delays could have on the vaccination campaign, especially in France. However, the laboratory announces that there will be “a small drop in deliveries in January», But an increase from the current 520,000 weekly “From the end of February”.

This statement from the German Ministry of Health comes shortly after that of the Norwegian authorities. The Pfizera laboratory in fact warned of a drop “starting next week»Deliveries of anti-Covid vaccines to Norway and Europe, time to improve its production capacities, announced the Norwegian Institute of Public Health (FHI). The latter did not specify the extent of the reduction in deliveries for Europe, but the drop for Norway is expected to be close to 18% next week.

“The temporary reduction will affect all European countries“The FHI said in a statement. “It is not yet clear how long exactly it will take before Pfizer returns to maximum production capacity, which will be increased from 1.3 to 2 billion doses.Per year, he added. According to Geir Bukholm, one of its senior officials, the FHI was notified of this decline on Friday morning. The FHI now says it expects to receive next week only 36,075 doses against 43,875 previously expected, a decrease of 17.8% for the Scandinavian kingdom.

Read also :Covid-19: poor and emerging countries, the forgotten in the vaccine race

Although it is not a member of the European Union, the Nordic country is closely associated with it in many areas, including in the context of the purchase of anti-Covid vaccines negotiated by Brussels. Like many European countries, Oslo began the vaccination campaign with the Pfizer / BioNTech vaccine on December 27 and injected rival Moderna’s first vaccine on Friday. As of Thursday, 42,003 people had been vaccinated against Covid in the country, or 0.78% of the population.