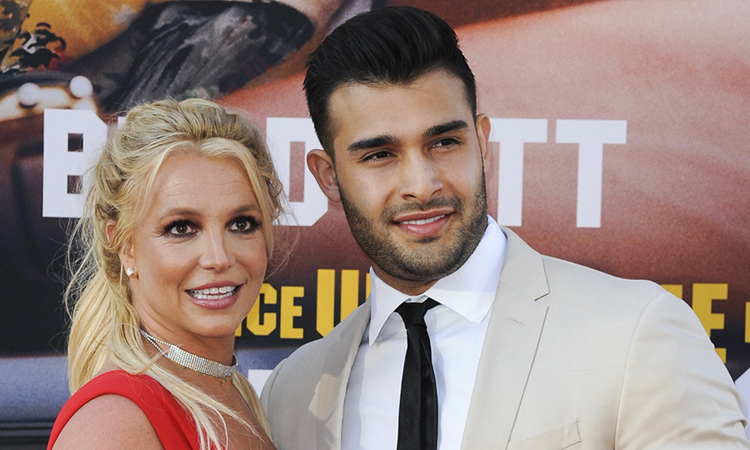 Sam Asghari is often suspected of coming to Britney Spears for economic gain, looking for opportunities to advance in showbiz.

Britney Spears and boyfriend Sam Asghari announced their engagement on Instagram September 13th. The actor personally ordered a ring in New York engraved with the words “Lion”, the nickname he gave to his girlfriend in praise of her strong will. In the video posted on her personal page, Britney Spears kisses Asghari on the cheek and says yes.

The star couple first met while filming MV Slumber Party (2016). Britney directly chose Asghari for the lead role in the project. On the magazine Men’s Health, the model said she was “stunned” when she first met the idol singer. Britney is also fascinated by his good looks and cheerful personality. The two invited each other to eat sushi after the filming and have been together for the past 5 years.

Sam Asghari always suffers a lot of gossip because he is dating an older, talented, rich girlfriend. Follow Cloud News, Besides congratulation, some Britney fans attacked Ashgari right under the engagement news article. “I hope he doesn’t do this for your fortune. Britney, I’m so glad you found love and happiness. Remember to prepare a prenuptial agreement,” one Twitter account commented.

Fans are suspicious because both have different assets. Asghari owns about a million dollars. He makes money mainly through modeling and acting. Asghari has appeared in a number of dramas such as NCIS, Hacks, Black Monday… He also opened the online fitness instruction service Asghari Fitness with a subscription fee of about 468 USD a year for a student. Meanwhile, according to Forbes, Britney Spears once earned about $ 485 million thanks to more than two decades of singing.

However, according to the sheet documents NY Times recently announced, Britney Spears completely unable to pay in exchange for Asghari’s affection. Despite earning millions, for the past 13 years, the singer has only been given about $2,000 per week by his father, Jamie Spears. She had to ask her father’s permission every time she went on a trip or went on a date with her boyfriend. She stopped performing shows at the beginning of 2019 and constantly had to pay fees for guardians and child support. By the beginning of this year, her net worth was about 60 million USD, mainly in real estate and savings funds for her two sons.

When asked by fans to make a prenuptial contract, Asghari humorously replied on his personal page, “Thank you for your interest in our love story. I will definitely prepare a tight prenuptial agreement. to protect her Jeep and her shoe collection, in case she wants to break up one day.”

Many Britney fans also questioned Asghari’s true feelings for the singer. They used to wonder why he didn’t propose to Britney even though she repeatedly suggested in the media that she wanted to have children and get married. When she testified in court in June, Britney revealed that her personal life was completely controlled. She could not get married or have more children, being forced to implant an IUD for many years. They got engaged a few days after Mr Jamie announced that he was stopping guardianship of his daughter after 13 years.

Despite prejudice, Sam Asghari made a silent support for his girlfriend. The two are not allowed to live together, but he always arranges work to be with her at important times. In early 2019, he went to take care of Britney Spears at the mental health center for a few weeks. He took Britney on a trip to Hawaii for entertainment when she was not allowed to be with the children for their birthday.

For many years, the actor kept a secret about his mistress being warded. Some fans suspected Asghari of helping Jamie Spears control Britney’s life. However, he did not respond to avoid negative noise affecting his girlfriend. In February, Asghari first criticized Britney Spears’ father on social media: “I have no respect for someone who constantly controls and stops our relationship. Jamie is an asshole. I don’t. I can’t tell you in detail because it’s a private matter.”

Sam Asghari was happy when Britney bravely appeared in court for the first time in June. Sources close to the actor told US Weekly: “He knows well what the management team does to her and finds it painful not to be able to directly intervene. Sam did his best to revive his girlfriend during the dark days.”

As a fitness trainer, Asghari directly created the training and nutrition plan for Britney Spears. Source of US Weekly She said: “Britney follows the diet of her boyfriend. She views eating healthy and working out with Asghari as a way of purging negative things both physically and mentally.”

At the end of August, Britney Spears thanked her boyfriend for not abandoning her during these difficult times. “This lovable bastard accompanied me through the hardest years of my life. He’s also a good cook. Hey brand Fast & Furious, don’t miss your next star,” she wrote on Instagram.

Sam Asghari was born in 1994 in Iran, moved to the US to live while in high school. He started his career in Hollywood as a fitness trainer, then tried his hand at roles as a model and actor. Before Asghari, Britney Spears had many love problems. She got into a noisy affair with Justin Timberlake and was accused of adultery by him. After that, the singer experienced a brief love affair with Jason Allen Alexander (lasted 55 hours) and Kevin Federline (lasted two years and had two sons).