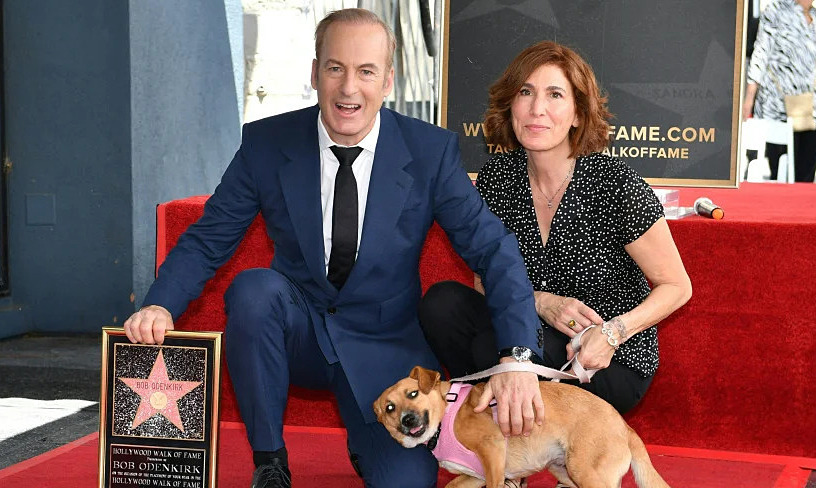 AmericaBob Odenkirk received a star on the Walk of Fame on the same day that the final season of “Better Call Saul” premiered, April 18 (local time).

The 59-year-old actor is the 2,720th star on the Hollywood Walk of Fame and the second in the series Breaking Bad, after Bryan Cranston. The actor said at the event: “When I first came here in 1987, I walked around the Walk of Fame, pretending to have extreme disdain for everything in Hollywood. I walked down the street, my nose up in the air, mocking. all the Hollywood icons, the fame, the stars Everything about it was so big, so far away and so scary to me… I still am today. Still pretending to belittle everything. But in my heart. , I love Hollywood”.

Ana Martinez, producer of the Hollywood Walk of Fame, said: “Bob Odenkirk stars in a popular TV series that made entertainment history. Fans will be delighted to know Bob’s star is placed next to him. co-star Bryan Cranston in Breaking Bad“.

Bob Odenkirk was born on October 22, 1962 in Berwyn, Illinois. He graduated from high school at the age of 16. When he went to college, Bob discovered his ability to write and perform comedy.

From the late 1980s to the 1990s, Bob wrote the script for the TV show Saturday Night Live and The Ben Stiller Show. He won the Emmy Award for “Outstanding Screenplay” for the variety show in 1989 and 1993. The play Motivational Speaker written for you by Odenkirk – actor Chris Farley – premiered at The Second City theater and magazine Rolling Stones voted as the animated play (short comedy) of Saturday Night Live best of all time. Odenkirk co-created the show with David Cross Mr. Show with Bob and David (1995-1998), broadcast on HBO. The show marked the friendship between Bob and David, which spanned nearly three decades.

Throughout his career, Bob has had nearly 120 big and small roles. His TV shows include: Everybody Loves Raymond, Dr. Katz, Professional Therapist, NewsRadio, Just Shoot Me!, Joey, Curb Your Enthusiasm, Arrested Development, Entourage, Weeds, How I Met Your Mother… In the film industry, Bob Odenkirk affirmed his ability to act in Oscar-competitive films such as Nebraska, The Post, The Incredibles 2 and Little Women.

In Better Call Saul, Odenkirk plays Saul Goodman – a corrupt lawyer who specializes in criminal defense. The series takes place six years before Saul becomes an attorney for Walter White, at which time he uses the real name Jimmy McGill. Bob escaped the shadow of Bryan Cranston in the original series, demonstrating his ability to improvise, giving the character the freedom to express his personality in the TV series centered around Saul Goodman.

The film was highly appreciated by the audience and critics for maintaining the value of an independent TV series, despite being inherited from Breaking Bad popular, follow Telegraph. The work has been nominated for an Emmy Award 39 times. Last July, Bob suffered a stroke while filming the spinoff’s final season in New Mexico, recovering a few days later.

The last movie Bob appeared in was Nobody (2019), he played the lead role of Hutch Mansell. The character of the exemplary husband and father of the family with a dark past was “made-to-order” for the actor. Realistic and gory action style of Nobody inherit from John Wick, has many similarities with the famous murder series. The film has a violent color that requires the actor to perform the fighting scenes himself to increase the realism. He practiced hard, learned most of the martial arts skills to play the role.

April 6, radio station AMC announced they are “rapidly developing a new series starring Odenkirk in 2023” titled Straight Man, Based on the novel by Richard Russo. The station owns the brand Breaking Bad describe Straight Man is “a life-crisis story, set at Railton College, told in first person by William Henry Devereaux Jr. (Bob Odenkirk), the dean of the English department at an impoverished Pennsylvania college at risk. closing mechanism”.

This year, Odenkirk released a memoir Comedy Comedy Comedy Dramaranked second on the best-seller list of New York Times in the first week of release.

The Hollywood Walk of Fame is a sidewalk running along Hollywood Boulevard and Vine Street, Los Angeles, California, USA. There are more than 2,000 five-pointed stars with the names of celebrities honored by the Hollywood Chamber of Commerce for their contributions to the entertainment industry.