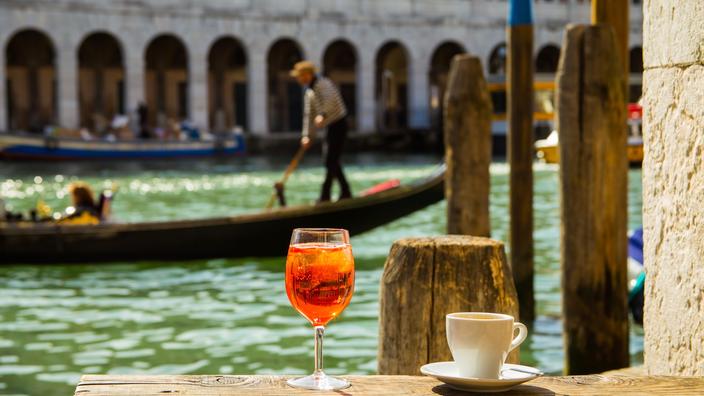 Italian wine has taken an important part in the French market thanks to a flawless commercial strategy.

While it often stays behind the scenes, letting the famous Spritz, of which it is one of the ingredients, shine the light, Prosecco is the star of the reopening of the terraces. Italian sparkling wine is carving out a growing place in the bubble market in France and has taken advantage of the confinement to gain further market share. In 2020, while all French wines marked the blow, its sales increased by around 20%, in volume, and in value.

Read also :Consumption rebounds in stores and on the terrace

“The decline in sales of French sparkling wines began in 2010 when Prosecco began to take off in earnest on the French market.», Explains Tony Verbicaro, former director of the Georges Chappaz Institute, dedicated to research and training in the wine sector for the University of Reims. And it doesn’t stop. Foreign bubbles represented 8.7% of the volume of supermarket sales in 2016, they now account for 16.1% in 2020, according to IRI, a consulting company for mass distribution players. Growth further reinforced by confinement, with three market share points gained. A success which owes largely to Prosecco, which monopolizes 37.5% of these sales. “Only foreign sparkling wines have continued to grow over the past ten years.», Summarizes FranceAgriMer, an organization attached to the Ministry of Agriculture.

A quantified success, the result of a well-orchestrated strategy. “For its development, the Proseccos consortium relied on a quality designation, equivalent to the controlled designations of origin in France., details Tony Verbicaro. They took this appellation which was valid for the best Proseccos to communicate on all the wines. They have built an image of quality wine sold at low prices.“”The fact that they have more and more brands and stakeholders in France is driving this growth, continues Eric Marzec, head of the wine division at IRI. In addition, they have strong sales resources in the field. There are large international groups behind, which gives them a significant strike force.»A strategy supported by the constant increase in production and support for the expansion of the Italian bubble internationally. As a result, the chic bottle at the cool price has won the communication battle. But, looking in detail, the Italian brew is not that cheap. According to IRI, on supermarket sales at the start of 2021, Prosecco is a little more expensive than its French counterparts, 6.43 euros on average against 6.21. A price to which it is often necessary to add the arsenal necessary for the realization of a Spritz.

Read also :Spritz, the flavors of the Venetian lagoon

Also to see – The wine war

The Spritz is chic

Because the recipe for success for Proseco is also to be backed by a very fashionable cocktail. “Originally, the Spritz had a very broad definition, notes Jérôme Perchet, president of the French Federation of Apéritif Wines. They were fairly strong Venetian wines that were extended with sparkling water. The idea only came after adding a bitter touch and adding Prosecco.This strategy is all the more relevant given that the wine market is structurally declining in France, a decline from which the cocktails market is partially benefiting. Prosecco straddles both segments. “In a Spritz, any sparkling wine can do the trick», Nevertheless assures Tony Verbicaro. But French producers do not always play the game. “They are often attached to the nobility of wine and do not want it to end in a cocktailHe continues. The lines are moving a bit like this Chandon bottle from LVMH which offers a pre-made Spritz.

In the end, only champagne remains insensitive to the effervescence of the new star. Its price, more than 20 euros on average in supermarkets, positions it in a different segment. And the declines in sales of the past few years are a simple consequence of the law of 2018 on the supervision of promotions, known as “Egalim”, which put an end to the Roaring Twenties. Also, if Prosecco has won the aperitif battle, champagne largely dominates that of revenues, and attracts more than half of those in the sector – 11% for its Italian counterpart. A matter of pedigree, according to Eric Marzec: “Today when we have a wedding, we take champagne, not Prosecco.“