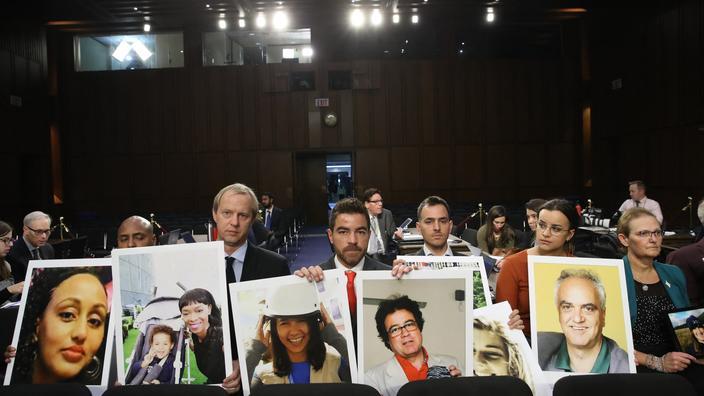 The agreement reached Wednesday does not mention sums, but the families of the victims will be able to take steps to obtain compensation in American courts.

Boeing has reached an agreement with the families of the victims of the 737 MAX crash that killed 157 people in Ethiopia in March 2019, and has admitted responsibility for the crash according to legal documents filed in court on Wednesday (November 10). from Chicago. “Boeing is committed to ensuring that all families who have lost loved ones in accidents are fully and fairly compensated”, said the company, requested by AFP. “Recognizing its responsibility, Boeing’s agreement with families allows the parties to focus their efforts on determining the appropriate compensation for each family.”.

Flight 302 to Nairobi, operated by Ethiopian Airlines, crashed in a field southeast of the capital Addis Ababa, six minutes after takeoff, due to faulty software. The accident had resulted in the grounding of the 737 MAX models, and the worst crisis in the history of the American aircraft manufacturer, as it followed by a few months another accident, that of a Lion Air aircraft in Indonesia in October 2018 (189 dead).

Senior lawyers for the families called the deal a“historical” and D’“Important step for relatives in their quest for justice against Boeing”. “It will allow all of them to be treated fairly (…) by creating a path to reach final resolutions, through agreements or trials”Robert Clifford, Steven Marks and Justin Green added in a statement.

These are substantial cases, which could easily take at least two more years to resolve. “

The documents filed on Wednesday do not mention any sums, but the families of the victims will be able to take steps to obtain compensation in American courts. The 157 people who died were of 35 different nationalities. A hearing is scheduled for Tuesday in Chicago to ratify this preliminary agreement. Then there will be mediations. But if they fail, each family will be able to present their case to a jury for damages, according to the law of the state of Chicago, Illinois. “These are substantial cases, which could still easily take at least two years to resolve”, said lawyer Robert Clifford.

Read alsoThe boss of Boeing at Le Figaro: “We will emerge stronger from the Covid and 737 Max crisis”

“We offer our deepest condolences to the families of all those who lost their lives on Lion Air Flight 610 and Ethiopian Airlines Flight 302”, the Boeing spokesperson said on Wednesday. “Since the accidents, Boeing has made significant changes as a company, and in the design of the 737 MAX, to ensure that accidents like these never happen again.” The 737 MAX, a new version of the legendary medium-haul released in 1967, tarnished the reputation of the aircraft manufacturer and cost it billions of dollars.

In January, in particular, Boeing agreed to pay more than 2.5 billion to settle certain lawsuits. The aeronautical giant then admitted that two of its employees had misled the FAA, the aviation regulator in the United States. During the two incidents, the flight control software, the MCAS, which was supposed to prevent the aircraft from taking a nose-down dive, had run wild on the basis of erroneous information transmitted by one of the aircraft’s two probes. The plane remained grounded for twenty months, before being gradually authorized to fly around the world since the end of 2020. The companies have since put back into service more than 200 aircraft of this type.