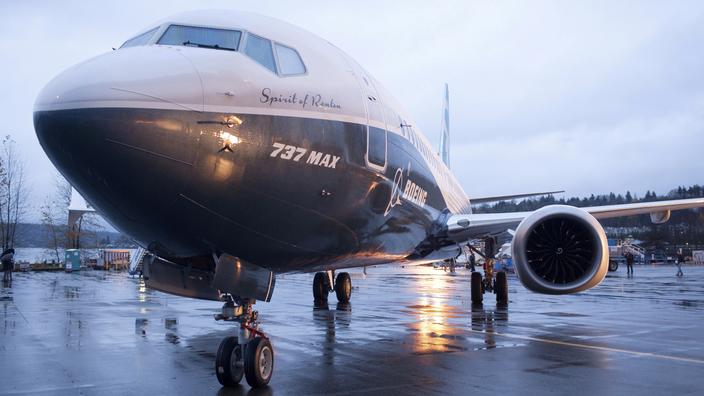 The general manager of the aircraft manufacturer, Dave Calhoun, said Tuesday that he could not give a specific date on the return to service of these devices.

The US Aviation Agency (FAA) said Thursday it had warned other air regulators that it was still working with Boeing to resolve an electrical problem that affects in total “around 106 planes»737 MAX, including 71 in the United States.

Read also :Brussels aims for an agreement with Washington on Airbus-Boeing

The aircraft manufacturer had asked at the beginning of April 16 companies operating its flagship aircraft to no longer fly certain devices, without giving details on the number, the time to allow the verification of a problem in the electrical supply system.

The FAA said Thursday in a notice sent to other aviation agencies that it continues to work with Boeing “to fully identify and resolve the extent of a power supply and grounding problem affecting certain 737 MAXs“.

The manufacturer had initially indicated that the problem could affect “operation of an emergency power control unit“, Said the FAA in a message sent to AFP.

“Analysis and testing subsequently showed that the problem could involve additional systems.Added the agency: a circuit breaker panel and the main dashboard. However, no incident related to this potential defect has been reported.

The director general of the aircraft manufacturer, Dave Calhoun, had indicated on Tuesday that he could not give a specific date on the return to service of these devices, but that once the FAA has validated the proposed remedy, the latter can be implemented “in a few days“. An American Airlines official, who had to set aside 18 737 MAX planes, said Thursday to wait for instructions to be implemented. “We hope it will be a matter of a few weeks, and no more“, Underlined Robert Isom.

Read also :The electrical problem on the Boeing 737 Max would be more extensive than observed

Southwest Managing Director Gary Kelly said the problem was “disappointing“. “It’s a production problem, fairly minor, fairly easy to fix, but we can’t afford to risk any consequences and everyone acts as a precaution.“, He said in an interview on CNBC. But “we need the MAX because the activity starts to pick up againHe got annoyed.

The 737 MAX, which was banned from flight in March 2019 after two fatal crashes, was cleared for flight again in November in the United States, and then in most parts of the world, after changes to control software from flight, repositioning of certain cables and new pilot training.