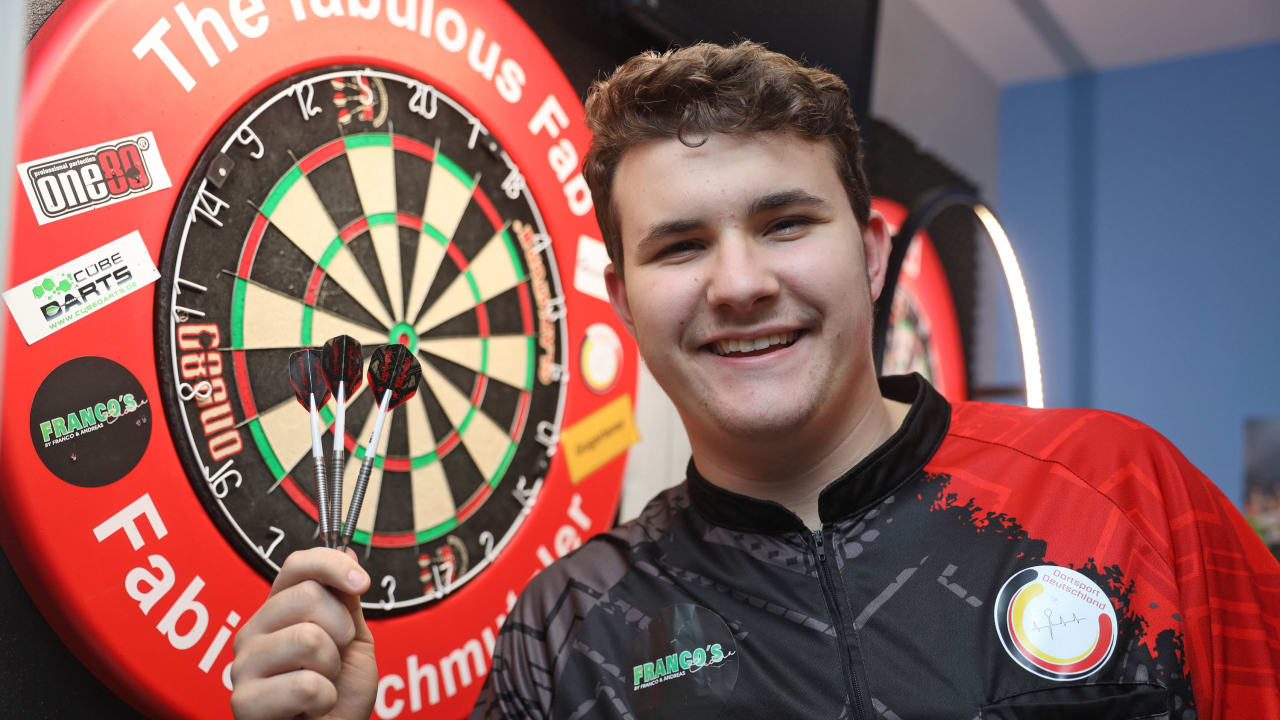 His world is flat!

Eintracht fan Fabian Schmutzler (16) will be the youngest star at the Darts World Cup in London in the famous “Ally Pally” from Thursday (9 pm). He is the second youngest rider in World Cup history after Australian Mitchell Clegg, who was 20 days younger when he made his debut in 2007.

The student is nicknamed “The Fabulous Fab”. Since his qualification in November, everyone has been raving about him. BILD visited him before his first World Cup litter the day after tomorrow against the Englishman Ryan Meikle at home in Preungesheim.

This Frankfurter is Germany’s darts wonder!

For Schmutzler, the World Cup was not an option at all: “Unbelievable, it’s like in a film. The chances were virtually zero. ”The reason: Because he was not yet 16, the student missed parts of the qualifying tournaments. From his birthday he started to catch up. With success! Fabian created the huge sensation.

It started only three years ago: in 2018, parents Pina and Andreas (both 51) found an e-dartboard while taking a Christmas stroll. You yourself liked to play in the pub for a few beers.

The gift arrived. Schmutzler: “I was quickly told that I had talent. I didn’t even notice it. “

His greatest strength? “My timing. When it comes down to it, I play the best. ”This also applies to Schmutzler’s idol: Raymond van Barneveld (54). “Barney’s” poster hangs in Fabian’s room. Across from his large Smurfs collection.

There the teen trains several hours a day on his dartboards. When he doesn’t play, he goes to high school. He’s not the big loudspeaker there: “I speak when I need to and don’t need a lot of fanfare.” He is best in Latin, chemistry and math.

The current career plan: become a Latin teacher. Darts pro? “That is not plan A. But when doors open, I will see what is possible,” says Schmutzler BILD.

At the moment he only thinks of the madhouse “Ally Pally”. 3000 darts crazy could cheer him there. What is Fabian looking forward to most? “The ecstasy after a 180 litter from me would be simply indescribable.”

That doesn’t leave him cold: “Of course I ask myself whether hate comes when I play badly.” However, it is much more likely that he will be celebrated hard as a 16-year-old.

By the way: At the World Cup, darts legend Peter Wright (51) is waiting for Fabian in the second round. He was thrown out against Gabriel Clemens last year. Deja Vu for Darts Germany? “I wouldn’t mind,” says Schmutzler with a smile.