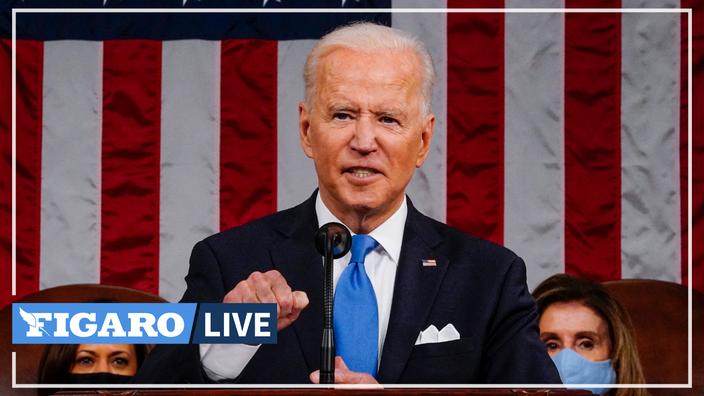 On the eve of the symbolic milestone of his 100 days in power, the tenant of the White House declined his “Project for American families”, for a total amount of nearly 2000 billion dollars.

“America is rising again!” Joe Biden announced on Wednesday April 28 in his first address to Congress since taking office. Approaching 100e On the day of his term in office, the US president delivered a triumphant speech, affirming his optimism, but also announcing far-reaching reforms. “I came to talk to you about crises, but also about possibilities”, Biden said, before setting out a series of measures that go far beyond ending the pandemic and economic recovery.

“I have never been so confident and optimistic about America”, Biden said, in the same Capitol where rioters had burst on January 6 to try to prevent the certification of his election, “The most serious attack on our democracy since the civil war”. “We almost plunged into an abyss of insurgency and autocracy, pandemic and pain, but we did not weaken”, said the American president. “We are working again. We dream again. We find out again. We are once again at the head of the whole world. We have proven ourselves to each other and to the whole world: America does not give up ”, he added.

The halls of the House were almost empty, the number of representatives and senators having been limited due to the pandemic, and the audience was all masked. Behind him were Vice President Kamala Harris and Speaker of the House of Representatives Nancy Pelosi. Biden noted that this was the first time a vice president had been addressed: “No president has ever said these words since this podium, and it is high time.”

Biden praised the success of the vaccination campaign in the first place. “We had promised 100 million injections for the first 100 days of the presidency, and we have passed 200 million … There is still work to be done before beating this virus, but what has been done is the greatest achievement. logistics that we have never seen before ”. He then explained how the coming end of the pandemic was a historic opportunity to make massive structural changes, advocating a massive public spending plan to rebuild the economy and compete with rising global competitors.

Biden’s plan fundamentally redefines the role of government in the economy. After decades of Republican and Democratic policies favoring the private sector and markets to the detriment of a public sector seen as less efficient, Biden has returned to a more interventionist approach.

He announced a plan to support families, funded in large part by raising taxes on the richest Americans, and a $ 2.3 trillion infrastructure program, which includes massive investments in bridges, roads and roads. internet networks.

He also announced a universal nursery school, and family allowances, saying that economic growth will be better assured by taxing the richest to help the middle class and the poor. “The flow of wealth has never worked, Biden said, it is time to promote economic growth from the bottom up ”.

Biden also explained how important it is to show rivals to the United States that the democratic system has its advantages: “We have to prove that democracy still works, that our government still works, and that we can meet the needs of our people.”

The US President addressed the issue of racism in the United States, and called on Congress to act. “We must come together to restore trust between law enforcement and the people they serve, to eradicate systemic racism in our criminal justice system, and to enact a police reform in the name of George Floyd , which has already been passed by the House … We need to work together to find a consensus, but let’s make it happen before next month, on the first anniversary of the death of George Floyd ”.

He also spoke about the cost of prescription drugs, and the need for increased gun control. “I don’t need to tell anyone, but gun violence has become an epidemic in America. We need more Senate Republicans to join the Democratic majority and remove the barriers to criminal background checks for gun purchases. We need a ban on assault rifles and high capacity magazines ”.

Joe Biden also insisted on the necessary modernization of the immigration system. “Let’s end our exhausting immigration bickering. For more than 30 years, politicians have talked about immigration reform without doing anything. It is time to fix it ”, he said, without however mentioning the current migration crisis at the Mexican border.

In the first three months of his tenure, Biden signed a $ 1.9 trillion emergency aid bill, passed without a single Republican vote, and made more than $ 160 million pay out $ 1,400 per person. households. Hundreds of billions of dollars in aid will soon be given to states and local communities. Funding for this program will be provided through a series of tax increases, but Biden has promised the middle class will not be subject to higher taxes. “I will not impose any tax increases on people earning less than $ 400,000 a year. But It’s time for American businesses and the richest 1% of Americans to start paying their fair share . Nothing but their fair share ”.

“There is nothing that we could not achieve if we decide to do it together”, Biden concluded. In the spans, none of the Republican elected officials present applauded.