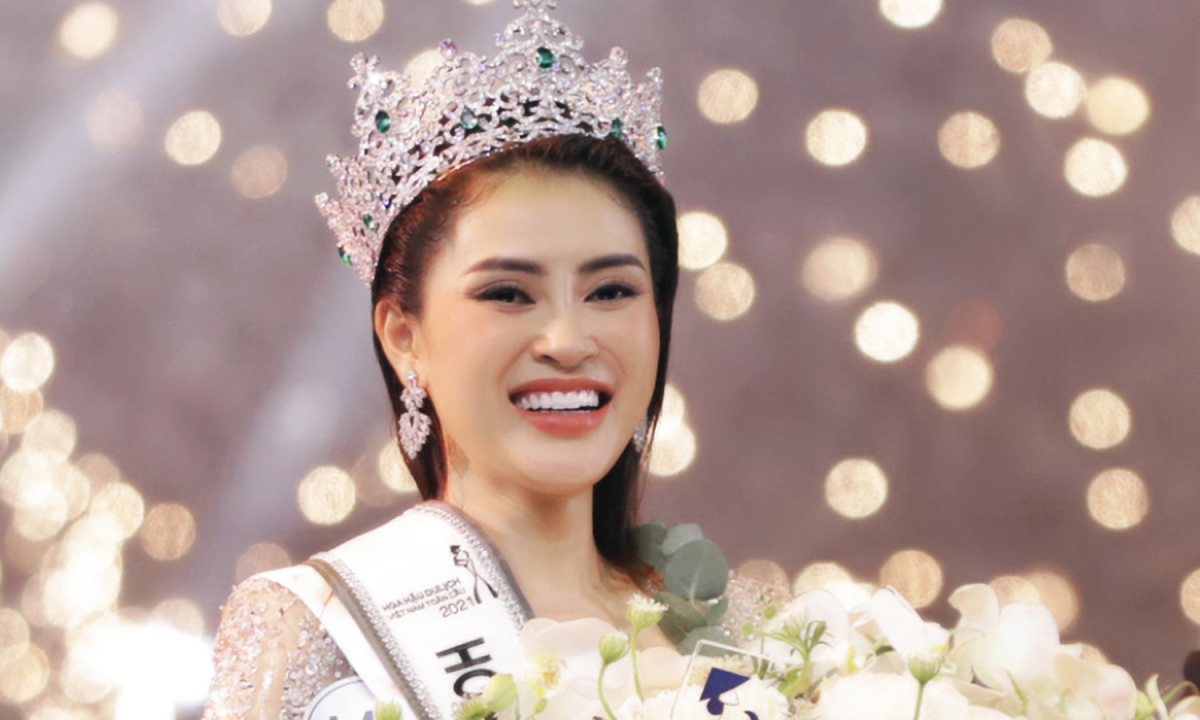 Binh ThuanLy Kim Thao – 27 years old, native of Bac Lieu – won the final of Miss Vietnam Tourism Global, on the evening of May 21.

She overcame 27 other contestants to win the crown on the night of the contest in Phan Thiet city. Minutes of announcing the winner, Ly Kim Thao burst into emotion with the 1st runner-up – beautiful Tran Tuyet Mai, native of Hai Phong. In addition to the crown worth three billion dong, she was selected by the organizers to participate in an international beauty contest.

In the response to choosing the top 5, Ly Kim Thao received a question from Miss Phuong Khanh – a member of the jury: “What is your favorite type of tourism, what do you suggest to develop this type of tourism?” That image”. The beauty replied that there are many types of tourism combined, but she is impressed with ecotourism. Born in Bac Lieu and raised in Ho Chi Minh City, she realizes that life is increasingly suffocating and stressful. “Therefore, choosing ecotourism is a great choice for me and tourists who want to find nature after stressful working days,” she said.

Ly Kim Thao was born in 1995, is 1.72 m tall, weighs 50 kg, and measures 86-59-93 cm. Before coming to the contest, she won the title of runner-up in a small beauty contest. She attracted attention in the sub-competitions before the final, entered the top 5 Ao Dai Beauties, the top 4 Community beauties. In the costume contest with Vietnamese identity, she was one of the five most appreciated contestants for the design Don stork with typical motifs of Bac Lieu’s hometown.

The finale lasted for over two hours, opening with the 28 contestants’ self-introductions over the music The country of lullabies (composed by Van Thanh Nho). Next, the organizers selected the top 15 to enter the bikini competition. 10 finalists participated in the evening gown competition. Top 5 behavioral contest on tourism topic. The jury consists of artist Le Khanh – head of the department, designer Nhat Huy – deputy director, Miss Phuong Khanh, Diem Huong, Lai Huong Thao… Singer My Tam stirred up the finale with a series of hits: Promise from nothing (Phan Manh Quynh), You don’t know yet (Khac Hung).

Organized for the first time, Miss Tourism Vietnam Global aims to stimulate tourism demand, which was scheduled to take place in 2021 but postponed because of the epidemic. At the end of April, the contest was restarted with the semi-finals in Ho Chi Minh City, choosing the top 30. The contest accepts transgender and plastic surgery candidates. The jury said that due to the removal of the regulations on natural beauty, the contestants were given priority points in terms of intelligence, such as good English ability, culinary knowledge, domestic and foreign travel. Candidates who are 1.65 m tall or more, aged 18-26 years old, have Vietnamese nationality, are living and working at home and abroad…