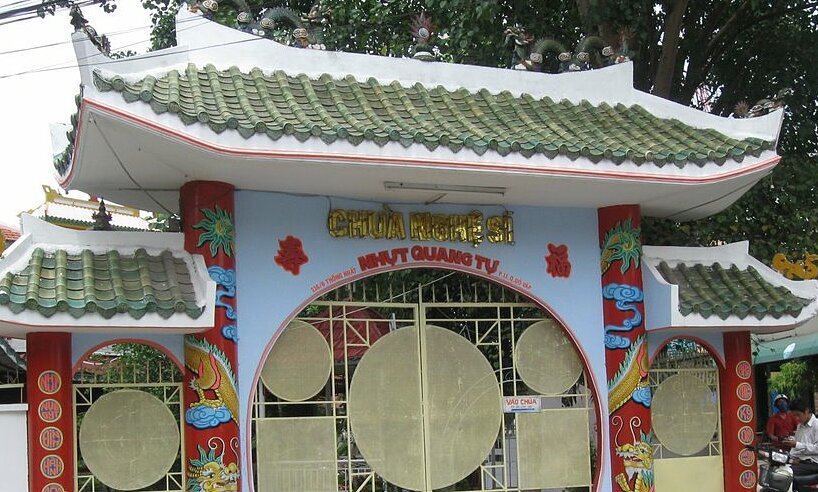 On June 18, the nameplate of the Artist Pagoda, in Go Vap District, was removed and replaced with a new sign with the words Artist Cemetery, along with the name of the Ho Chi Minh City Theater Association. Ms. Trinh Kim Chi – Vice President of the Theater Association – confirmed this unit for people to change the sign. She said the decision was made after the Executive Committee meeting, because the unit does not have the function to manage the temple.

Recently, the Artistic Friendship Board (under the Association) also invited monks at the temple to move out, and activities at the temple stopped. The section of the cemetery for the artist – including burial sites and ashes – is preserved. The representative of the Association said that in the coming time, the unit will be repaired to keep the beauty of the monument and create a spacious visiting space for the public. In addition, the Association said that it planned to have a meeting to clearly inform the press, due to the multi-party legal issue.

The event that the Ho Chi Minh City Theater Association changed the name of the Artist’s Pagoda was controversial. Many people believe that this move may cause the name of the relic to be erased, gradually disappearing from the minds of many generations. Mr. Tran Dai Phu (66 years old) – an audience member with the temple for many years – said he was sad because in the past few months, the activities of chanting, burning incense, and turning on lights in the main hall had all stopped. “I hope this relic will keep the same name, because this is a familiar place for the public in the city for the past few decades. I ride a motorbike taxi, just mention the name Artist Pagoda, everyone knows.” Mr. Phu said.

Singer Che Thanh said she regretted but somewhat sympathized with the decision of the management unit. “Decades ago, the temple was a famous relic, but later, with the development of the city, environmental resources are increasingly scarce, it is foreseeable that the temple is planned. The rest of the cemetery will be renovated and spacious, continuing to be a place to visit for a large audience,” the singer said. Che Thanh once sent the ashes of his mother – the leader of the Bach Hoa Lien reform group – to the Artist Temple more than 10 years ago, only to be brought back for water burial a week ago.

Artist Pagoda (Nhat Quang Tu, or Phat Quang Tu) is located at 116/6 Thong Nhat, Ward 11, Go Vap District, Ho Chi Minh City. According to some documents, in 1958, artist Phung Ha was sponsored by the Tuong Te Artists Association to buy land as a resting place for Cai luong artists. After Mrs. Phung Ha bought a land of 6,080 m2, for nearly 10 years, the pagoda has not been built because of lack of funds. In 1969, elected Nam Cong (Le Minh Cong) asked artist Phung Ha to build a temple to practice. In 1970, after the project was completed, elected Nam Cong decided to sell it because there was no money left to pay the debt. Bau Xuan (carrying Da Ly Huong) bought the amhouse for nearly 100 gold trees, then built it into a pagoda, a part of the area as a burial place for many artists and relatives.