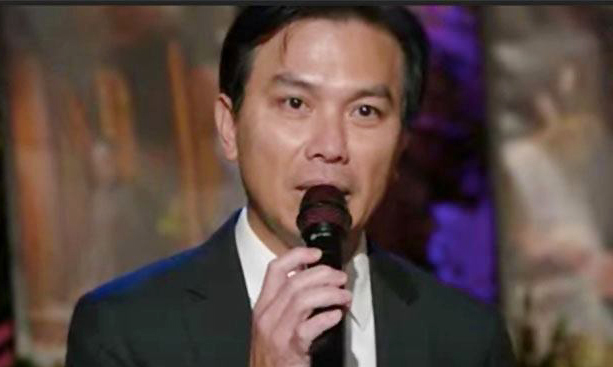 AmericaManh Quynh sang “Farewell to you at the end of life”, Minh Tuyet performed “Dream of storks”… at Phi Nhung’s funeral.

At the singer’s funeral on October 12 (local time), Manh Quynh sang the song he composed for two hours while on a plane from Arizona to California to see off his colleagues. He said: “She brought beautiful lyrics and singing to life”.

Quang Le, Minh Tuyet, Nguyen Hong Nhung talk about the memories of sticking with the voice Cork Cotton. Minh Tuyet touched that 25 years ago when she first came to America, the first artist she met was Phi Nhung. She said: “Once I went to her house to play, there was a show in Houston calling to invite her to sing. Nhung told me to invite me to sing, pay any amount of money and told me to try. She is carefree. helping others”.

Minh Tuyet doing homework Dream of storks (Vu Quoc Viet) for two days to sing at the funeral with a message wishing the female singer rest in peace. Performing music, Minh Tuyet sometimes stopped because of choking his voice. Quang Le chooses music Sad day (Lam Phuong). He said the late singer was closest to him when he decided to return to his hometown to sing. “I remember when Nhung opened the first vegetarian restaurant in the country, she told me that I was too fat to be a vegetarian. But how could she say that, so many people loved it.”

* Artists in the US bid Phi Nhung goodbye

Nguyen Hong Nhung was married to the younger brother of singer Trizzie Phuong Trinh, had many opportunities to interact with Phi Nhung, and considered the singer as a family member. She said she witnessed her colleague raise her daughter Wendy from a young age and admired the sacrifice she made for her daughter. Presented by Hong Nhung My mother (Tran Tien) when saying goodbye.

Viet Huong cried and talked about the day Phi Nhung fought with Covid-19 on her hospital bed. She revealed that before receiving ECMO intervention on September 7, the singer was a little awake and said she wanted sweet potatoes but could not eat anything due to illness. Viet Huong said: “For more than a month, Wendy and I discussed Phi Nhung’s illness and prayed every day. Every time I asked my daughter’s opinion about the doctor’s treatment decision, I heard her say ‘I’m sorry’. agree’ I’m afraid because the word ‘yes’ can be when Nhung’s situation is better or worse”.

The daughter of the late singer – Wendy Pham – said that after the funeral, her mother’s ashes were sent to Hue Quang Pagoda, according to Phi Nhung’s wish to live at the temple at the end of her life. Viet Huong also sent a $5,000 donation on behalf of domestic artists to Phi Nhung’s charity fund.

Phi Nhung died at the age of 51, at 12:15 pm on September 28. In August, the singer returned from charity and caught a cold, RT-PCR test was positive for nCoV. In mid-August, she was hospitalized at Gia An 115 Hospital, then transferred to Cho Ray Hospital, where she was treated in the Intensive Care Unit until her death.

She was born in 1970, from Gia Lai. In 1989, she went to the US, sang charity at the temple and succeeded in the overseas music village. In 2005, Phi Nhung returned to the country, still pursuing the music of her homeland, and adopted many orphans.